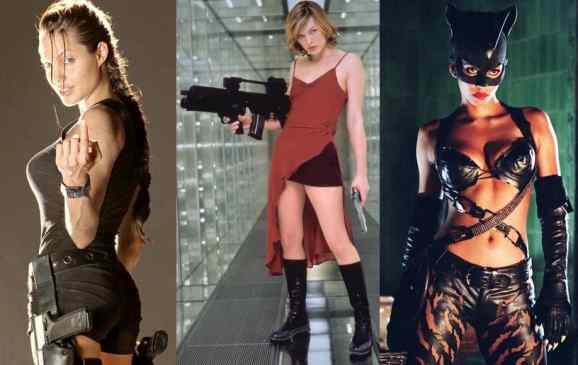 There is a certain stigma associated with action-oriented female characters and their often over-sexualised sense of style. What many may argue is simply a cheap ploy to further draw in a larger range of the heterosexual male audience, the almost mandatory role of a Hot Babe Who Kicks Ass and her revealing attire in an action/adventure film is not only representative of the film’s take on powerful women, but perhaps also of a more concerning matter; the level of comfort our society feels towards these particular types of women. If we are all equal now, then why do we have to be near-naked or clad in a PVC catsuit in order to kick some ass?

In past decades, action heroines have generally been limited to love interests/side-kicks/Succubus-types who solely exist on par with the action hero. Women had never truly been a powerful force in the male-dominated genre, with the few exceptions most notably including Sigourney Weaver in the Alien series and Linda Hamilton in the first two Terminator films.

However, as the early 2000s brought on the dawn of video game adaptations, with Lara Croft: Tomb Raider (2001) and Resident Evil (2002), the film industry had apparently become more comfortable with allowing the ladies to take the lead, especially seeing as these films proved to be quite lucrative. The only problem was, and still is, the question as to whether or not these films would have been as successful had they not displayed Angelina Jolie and Milla Jovovich making the most of their physical assets in short-shorts and tight tops. The same can be said of pretty much any female comic-book character who has been brought to life on the big screen, whether she is a heroine or a villain. Michelle Pfeiffer’s iconic Catwoman-suit in Batman Returns (1992) is perhaps the most dramatic example of lecherous costume design since Jane Fonda donned her futuristic gear in cult classic Barbarella (1968). That is, until Halle Berry’s Catwoman (2004). Although Catwoman as a character is undoubtedly meant to portray a sexual nature, the level of recognition her inordinately salacious ensembles have garnered over the decades suggests that unless the action-girl is dressed like a dominatrix, people simply will not care to remember her.

Though this type of over-sexualisation is generally shrugged off as a harmless method of playing into the macho-male fantasy of a two-in-one (getting to watch an intense action sequence whilst ogling a hot girl in tight clothes), it further begs the question as to whether or not these films would be considered as entertaining by the masses if the hot girl was not dressed to impress. An initial response may be “Of course, but it’s just a little more fun when they look hot”, but if that is genuinely the case, then why have we hardly seen any women who are not sexualised?

This lacklustre variety may suggest a possibly overly dramatic argument that our society in general (not just the men) may not be entirely comfortable with watching a female character in action who is not in a ridiculous get-up. The sexy clothes are part of what make up the fantasy surrounding this type of character, creating an almost unreal portrayal of the female gender. Why can we not have a real-looking, real clothes-wearing woman of action? Is the thought of her so unbelievable or unappealing?

Of course, there are a few noteworthy exceptions to the misguided stereotype. It appears that action/adventure/sci-fi films such as Alien (1979) and The Terminator (1984) that are meant to be taken somewhat seriously often take their leading ladies seriously as well. In recent years, films such as Kill Bill: Vol. 1 (2003), Kill Bill: Vol 2 (2004) and The Hunger Games series have featured an array of female characters who are dressed to kill, not dressed to excite. It seems that Hollywood is generally on the right track.

Yet, why is it that some action films fall prey to the obligatory “sexy scene”? Even when the action-girl is, for instance, an international spy in relatively un-sexy clothing throughout most of the film, filmmakers feel the need to throw in a scene in which she is dressed like a stripper, prostitute, or just simply in her underwear, seemingly to remind audiences that her sexuality is present (think Jolie in Mr. & Mrs. Smith (2005), or even Weaver in Alien. Was that necessary?). Even worse, it appears that at times entire films are created around this “sexy scene”, Sucker Punch (2011) being the most recent example of a gratuitous display of over-sexualisation. If we literally stop seeing women dressed up as sexual playthings whilst they fight for their cause, then maybe society will stop thinking of them as such and take us more seriously.

Perhaps then we may come to the conclusion that Hollywood has much to learn. In an era where the comic-book adaptation form of action films is more popular than ever before, may we request that the female characters’ ass-kicking costumes are given the same consideration as the male’s? Batman, Spider-Man, Iron Man… Audiences are given a complete run-through of every aspect of their bulletproof/aerodynamic/computer-powered suits, whilst the women simply appear in their cleavage-baring, figure-hugging outfits, and we are supposed to accept that there is a logical reasoning behind it. Fingers crossed for Wonder Woman.

Posted on Feb 7, 2014 by
Sonia Charlotta Reini
English & Film graduate. Passions include: writing, horror films, and writing about horror films. Feminism tends to creep up quite often as well.
Edited by Jordan.
Follow