What Happened?: ‘The Poughkeepsie Tapes’

Back in 2006-2007, you may remember a trailer for the found footage horror flick The Poughkeepsie Tapes playing before Frank Darabont’s The Mist. I sure do, and I remember it being pretty darn spooky too, which means it was right up my alley. A collection of tapes is found in Poughkeepsie, New York, chronicling the torture, rape, and murders of The Waterstreet Butcher. The film is actually inspired by various serial killers including one from the titular town Poughkeepsie, but it’s not based on any one single murderer. Despite the promising theatrical trailer, The Poughkeepsie Tapes never actually got to meet the big white screen. For years the only way to attain the film is a rough cut through torrents and file sharing sites that are more than likely to send a little parasitic gift packing along with your download. The film is directed by John Erick Dowdle (Quarantine, Devil), his brother also on board as producer and co-writer. You’d think after their well received American remake of Rec, and nearly saving M. Night Shyamalan’s career, the film makers little ditty would be let out into the sun, but still no word.

When you do a quick internet search for the film, you’ll likely come up with a bunch of question marks and old forum threads asking when the release of the film is. The bread crumbs seem to drop dead after that. The film was pulled from its February release, rumored to be because of poor festival reactions. Though according to actual audiences members the reactions were positive. Now since this is a horror it’s tough to gauge a reaction because someone walking out of the theater could technically be considered a compliment. The film premiered at Tribeca in 07′ and MGM studios picked it up. They slated the film for a wide release and then pulled it about 5 weeks before hand. This wasn’t the only film the studio pulled, they yanked a handful of others from release as well (unidentifiable). It’s no secret the studio has gone through some financial woes, and it seems that they pumped the big bucks into promoting this feature, hoping maybe it’d be another Blair Witch Project, since The Poughkeepsie Tapes was a good two years before the receding tide of found footage flicks out now. Due to budget concerns they may have pulled the plug on the promising film. This is all really speculation, for there was never any public statements about the decision to not distribute the film. MGM still owns the rights, and other studios have offered to buy it. The hole might be dug too deep now, the film is possibly no longer culturally relevant for a theatrical release, and the studio may be hiding in the underbrush, waiting to pounce it on an unsuspecting public. The fear that is may get lost in the already crowded sea of found footage trash to sift out of Hollywood. A second release date was scheduled for January 2, 2009 but that date too faded into memory. Fangoria Magazine has had the film on their upcoming release calendar for about 4 years now. 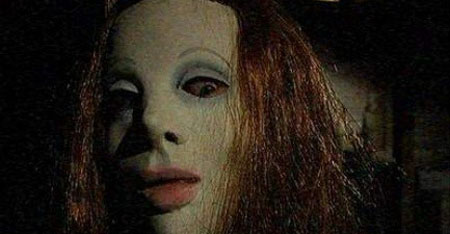 So what is the reason for this silent hold on The Poughkeepsie Tapes? Do we really need an answer? I think yes, in order to keep the legacy of the film alive, and plus it’s downright fun to develop a mythology around this thing. I have actually seen the film, back in 2009 I watched it on an I-pod during my Latin class, in broad daylight, in a crowded room, and the film still disturbed me. On a 4″ x 4″ screen I still remember haunting images and scenes of the Waterstreet Butcher being “intimate” his victims. Interviews with a deformed woman, chilling voice overs recounting seemingly too real incidents, and an unnerving mask that I couldn’t quite identify. With all those variables working against it and it being a rough cut of the film I’d like to believe that the film was pulled from release to spare the sanity of the public. The Poughkeepsie Tapes is terrifying, haunting even. The way MGM fell over it they must of felt the same way, perhaps after some outside opinions and another screening they second guessed their decision. It isn’t very bloody, but it’s atmosphere is heavy. The Poughkeepsie Tapes suffocates the audience.