Flawed gems of our youth: The Sword and the Sorcerer, a very belated review 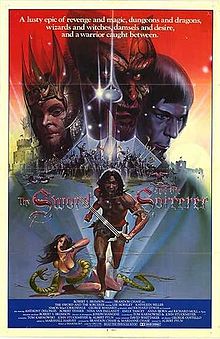 So there I was, reorganizing the movie shelves when I came across a film I remember fondly from my youth. I always tend to forget about it, forget I own it and manage to be surprised each time I find it. “Will it be as good as I remember?” I ask myself each time I watch it. And as the credits start to roll I feel like I’m a kid all over again.

I saw The Sword and the Sorcerer in its original theatrical release in 1982. I was 14 and I doubt Mom was aware of the movie I was going to see, so if she reads this, I’m probably going to get in trouble. “HA!! You can’t ground me! I’m in my 40’s! I have been out of your house for MONTHS! OK, days. Can I come home to do laundry, please?” Back to the review…

This R rated film was a surprise hit in most countries. A sequel was planned and took two over two decades to materialize. Tales of an Ancient Empire was “released” in the U.S. in 2012 and no one saw it. I am completely OK with that. S&S is a masterpiece of silly, needlessly violent action, at least by 1982 standards. One was most definitely enough. S&S was directed by Albert Pyun who also gave us another lump of cinematic cheese called Captain America in the 90’s.

Just to be clear, this film is a turd. It is a shiny, violent, gratuitous turd covered in wonderful gold, but a turd all the same. That is not as bad a thing as it sounds. It has everything my inner 14 year old needed and still needs. Fake looking swords? Check. Cartoon violence? Check. A “manly” hero that is a little too blow-dried to be real? Check. All too brief glimpses of boobies? CHECK! I LOVE this film!

I know what you are thinking, “there is lots of stuff I loved as a kid, and none of it has aged well”.

That is not the case here. When something starts out fairly silly and goofy, it is not likely to lose any entertainment factor over time (The Muppet Movie anyone?). When you set out to be fluff, you don’t really need to worry about being misunderstood or dismissed years later.

The story, such as it is, follows the hero Talon played by Lee Horsley. He has a bitching sword that fires it’s blades at people dumb enough to stand still. Talon is the typical fantasy film rouge in that he is “a fighter and a lover of women”. As a boy he was the prince of the realm when his family was overthrown by Richard Lynch, the bad guy in almost every 70’s TV show. There are actually a lot of bad guys in this film. Bull from Night Court (under a lot of makeup) is the evil sorcerer of the title. Genuine plastic human Simon MacCorkindale is an opportunistic wanna be ruler and Buzz Murdock from Route 66 (George Maharis who makes your average child molester look trustworthy) as yet another villain Machelli. Talon kicks ass, gets captured, kick ass again and gets the girl, played by perfect “80’s cute yet still a little bit hot chick” Kathleen Beller. OK, that isn’t a category recognized by the Oscars but it really should be.

The movie is all color and noise but unlike a Transformers film, there is no attempt to be realistic. Where Transformers and most modern action fluff try to MAKE you believe in the premise with special effects, this film just MAKES BELIEVE and you have to willingly wade neck deep into the ‘crap-sammich’ that is this silly movie. Everyone is only gritty on the surface. Scratch that surface even a little and they are all made of cream cheese. The heroes all have perfect, shining white teeth while the women are bosomy and beautiful. The women are in soft focus while the men all glisten with clean fresh sweat. At the time, these “stylistic” touches were just part of the romanticism of the film but now it is a little distracting. As the plastic human MacCorkindale is on the screen being tortured, all you can see is his perfectly white teeth. As one of the lovely maidens is gutted like a fish, under the blood and dirt, you see her perfect blond hair and make-up. There are anachronisms galore but none of these flaws seem to matter.

I defy any genre fan to watch this without getting wrapped up in the foolishness and swept along in the pretty colors and clanging metal. There is more deliberate humor than you would expect in a film of its age and type. It does not take itself too seriously and that is most likely its saving grace. Campy dialog is delivered as seriously as Shakespeare and, cheesy as it is, the film’s romantic premise just works. Everyone speaks in grand declamatory phrases as though expecting a fanfare every time they open their pie-holes.

Everything in this movie seems predetermined. The characters seem to know the future and often refer to the climax of the film as the “final conflict” like its circled in red on their calendars (THINGS TO DO TODAY: Final battle, remember sword!).

Unlike some junky films, S&S does not go out of its way to point out its flaws. It just does not seem to care that much.

Find this movie and let your inner 14 year old enjoy! I defy you to try to hate this goofy flick!