This Is The End Trailer: The world will end, again

The world did not end as the Mayans predicted but in Evan Goldberg and Seth Rogen’s upcoming comedy This Is The End all hell breaks loose! One of the things that stands out from the movie, even before watching its trailer, is the long list of great cast where along side with Rogen, James Franco, Emma Watson, Paul Rudd, Jonah Hill, Jason Segel, Jay Baruchel, Danny McBride and many others try to survive the end of the world. Another twist, the characters they are portraying, are themselves! 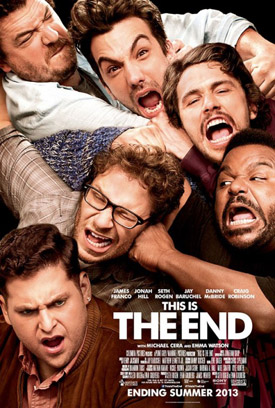 Goldberg is best known as a co-writer of Superbad and Pineapple Express, so far, he has not been in the director’s chair and the same goes for his long time partner in writing, Seth Rogen. Despite of this, the men are very familiar with humor, continuing their collaboration with basing their film of the world ending on their short film Jay and Seth vs The Apocalypse (2007). Considering the trailer, the collaboration between them two works wonders and it also doesn’t hurt to have such a skilled comedic cast behind the production. This Is The End will most likely be a great comedy not just for those who love Superbad but for all the fans of Rogen, Rudd, Hill, Franco, Segel and Baruchel. Plus, it does help to have Emma Watson and Rihanna on board to add that something extra to this hilarious testosterone pile.

But as with all great things, the challenge is not being excited about the movie but keeping that excitement running until the day of its release which for This Is The End means being thrilled until the Summer. This is The End premiers on 14th of June, 2013.

Posted on Dec 31, 2012 by
Getter Trumsi
Student by day and a movie-blogger by night, I love to watch movies and TV-shows but not as much as I love writing about them.
Follow