The CW Network has a bonafied hit on its’ hands with their brand new show Arrow. Taking the classic comic character Green Arrow and rooting him in a more realistic world has paid off so well for them that they are even considering a Wonder Woman series as well. But a hero is only as great as the villains he faces with Oliver Queen so far battling the likes of China White, Deadshot, Deathstroke, and the Royal Flush Gang with even more villains announced for the future such as Firefly and Count Vertigo. That is the beautiful thing about Arrow: since he doesn’t have an extensive rogues gallery to do battle with the show pulls from the entirety of the DC universe. What villains should he face next? This article will list the Top 5 DC Villains that need to be on Arrow, but before we kick it off there is an honorable mention.

Edward Nigma only gets an honorable mention due to the fact that I can’t actually see him being on the show. He would be perfect, mind you, as he would be a villain that tests Oliver’s wits instead of his physical skills and it’s not like he hasn’t been in a Green Arrow comic before (see Green Arrow Vol. 3 #13, #35-#37, and #49-#50), but he’s simply too big of a Batman character to put on this show currently if ever. Maybe Season 3 or 4 but as it stands right now, not so much. 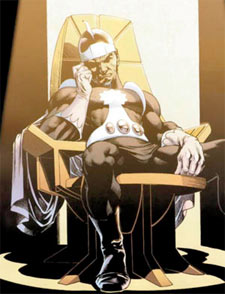 Who: Arthur Light has the power to manipulate and control light for a multitude of purposes such as but not limited to invisibility, blasts of energy, force fields, and the ability to fly. He also possesses a high level of intelligence.

Why: Originally Dr. Light’s powers came from his suit before they became a permanent part of his physical makeup. With Arrow‘s more realistic take they could easily adapt many of his power (except for the power of flight) into a suit using practical technology. He would also have to wear a toned down version of his costume sans cape.

Possible Arrow Storyline: Arthur Light could be an employee of Queen Consolidated that is illegally using Queen resources to fund his creation of his suit without their permission. Discovering this crime Walter Steele would fire him and confiscate his suit claiming it is Queen Consolidated property. The villain would seek revenge on the man that took his entire life away after breaking into Queen Consolidated to reacquire his suit. Green Arrow would stop him from murdering his step-father causing the villain to shift his focus towards the Emerald Archer so he can steal money and technology from other sources to continue his research unimpeded. 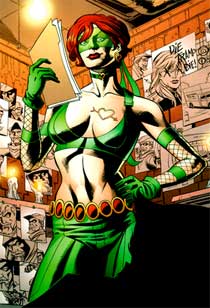 Who: Carrie Cutter is a former special ops soldier that volunteers for a program to make her fearless that has the side effect of turning her emotions up to the extreme in the area of love. Green Arrow “saves” her and she becomes obsessed with him. She is an expert in hand-to-hand combat due to her training as a soldier.

Why: She would be a perfect as she would be mentally unstable unlike the others he usually squares off against. This unpredictability to her actions and her misguided attempts at love would be a compelling addition to the show that has the potential to go in multiple directions.

Possible Arrow Storyline: The first to do is eliminate that overly complicated Special Ops backstory and make her just a normal woman. A pretty straightforward introduction would involve using a flashback to Green Arrow saving Carrie from a would-be attacker. She instantly falls in love with him and spends the next few months training extensively so that, according to her delusion mind, they can fight crime together. We arrive in the present where Green Arrow rejects her help seeing her for the stalker that she is. She can proceed to follow Green Arrow and witness him conversing with Laurel Lance causing Cupid to deduce that Ms. Lance is the one coming between her and Green Arrow and that she must be eliminated to fix the problem. Green Arrow would stop the assassination attempt and send her for obvious psychiatric help. She can return in a later episode where she escapes the institution and begins to “help” Green Arrow by killing lesser bad guys that he has spared or even some that have reformed. Her twisted logic being that they are simply a silent threat to her man’s safety. Eventually she can team-up with a now villainous Merlyn who deludes her into thinking he was the man that saved her all that time ago and the current man masquerading as Green Arrow is an imposter. 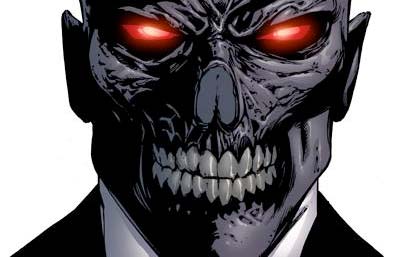 Who: Roman Sionis was born into a wealthy family that had more interest in their social status than their son. After murdering his parents, inheriting the family fortune, and subsequently going bankrupt, he snaps and decides to become a crime lord and wear a mask carved from his father’s ebony casket. He wields two automatic pistols and is proficient in hand-to-hand combat.

Why: Black Mask would provide the organized criminal element in a more overt nature compared to everyone else on Arrow that is more secretive. He also has a trademark look that would differentiate him from the usual crime boss and his connection to Batman mythos would lend him instant notoriety.

Possible Arrow Storyline: Black Mask would undoubtedly be at odds with whomever John Barrowman’s character really is. His goal would be to take over all organized crime in Starling City and he would go about in a more dramatic nature than the usual criminals. His power play could ignite a gang war in the city and bring in other villains such as Blockbuster and Brick doing a story that is reminiscent of the Spider-Man “Gang War” arc from the comics but something that will never be portrayed in a live-action Spider-Man movie. 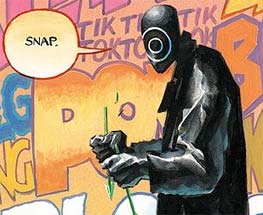 Who: Onomatopoeia is a serial killer who targets non-superpowered superheroes. His name is derived from the fact that he imitates noises around him. He is a superb athlete, martial artist, and weapons expert with a high intelligence. He also has a habit of collecting the masks of the heroes he murders in a trophy case. His true identity is unknown.

Why: One of the few villains from Green Arrow’s rogues gallery that hasn’t already been on or announced thus far. His look is striking and he would make for a formidable foe. They’d have a little work to do in regards to what direction they’d take his dialogue in as a villain that talks only in sounds would be a challenge to do on television which stops him from reaching the top spot.

Possible Arrow Storyline: He could be introduced by attacking Huntress sending her to the hospital in critical condition after she barely escapes. This is all part of his master plan to get at Green Arrow, his true prize. Onomatopoeia would work best as a recurring menace that works from the shadows, an individual that would eventually deduce that Oliver is Green Arrow. The fun part for the viewer would be trying to figure out, along with Oliver, Onomatopoeia’s secret identity which I’d personally reveal as Carter Bowen (the neurosurgeon/author/former classmate of Oliver introduced in Episode 6). Having Oliver finally figure out his true identity and defeating him battle, Onomatopoeia would either go to prison or end up dead with an arrow though the skull. 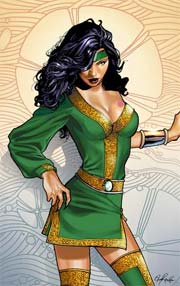 Who: Jade Nguyen was sold into slavery as a child and adopted by a Chinese freedom fighter who taught her how to fight. She becomes a mercenary and uses a vast array of martial arts, acrobatics, weaponry, and artificial fingernails dipped in poison to accomplish her criminal goals.

Why: She has a steeped history with Green Arrow’s former sidekick from the comics (Roy Harper) and an association with an already established villain in the form of Deathstroke. Her character wouldn’t have to be altered at all for the show as she would fit in perfectly with the tone of the show and the story potential from her could last into multiple seasons with the option to turn her good later on in her run.

Possible Arrow Storyline: Chesire could definitely be a recurring character. She would be either working for Deathstroke or seeking revenge for her ally’s death depending on the direction the show goes with him. She would already know that Green Arrow is Oliver Queen due to Deathstroke learning this during his time on the island and would introduce herself by arranging Green Arrow to “save” her from some thugs she has hired. She’d “bump” into Oliver at a party and he would be instantly attracted to her. The whole point for her getting so close to Oliver is to find out the identities of his allies and discover the whereabouts of his base of operations as she simply doesn’t want to just kill him but destroy everything he has built and everyone he loves. Once she uncovers this information she would send assassins to target his friends and poison Oliver herself. Of course, the viewer would be oblivious to all this happening until the grand reveal merely thinking she is simply Oliver’s helpless girlfriend. Oliver would of course emerge victorious but not before losing one his allies to the cold embrace of death and Chesire would flee after being defeated in battle with Green Arrow realizing that he is every bit as dangerous as Deathstroke told her. She would return however once Roy Harper is introduced on the show and the two would strike up a romance for real this time. Where the writers go from here is anyone’s guess as she could remain bad or turn to the side of good.

Posted on Nov 19, 2012 by
GothamRogue
I'm Canadian and proud of it. I love comics and other nerdy things. Who am I? I'm GothamRogue. Why should you care? You'll see.
Follow