First released in 2010, Pretty Little Liars has created an explosion of interest from within the television industry. Not only has the program managed to gain constant and ever-growing support form a global fan base, but it has shaken the world through its various media platforms. Although it initially appears to be just another teen drama, the expansive world created in and around the show has allowed for audiences to experience the storyline in a unique and engaging manner.

Following the lives of four Rosewood girls, Pretty Little Liars is initially seen to be exploring the effects of a close friends death on teenage girls. However, when the mysterious “A” begins to torment them, the girls soon find themselves facing a series of chaotic circumstances that leave them questioning the reality of their friend Alison’s death. Essentially, the series revolves around the questions: “Who is A?” “Is Alison dead?” “Who is helping A?” “Why is A doing this?” Of course these questions are periodically answered and then somehow re-asked, but the suspense they carry is what keeps the shows massive fan base coming back for more.

Yes, at times it seems like any old teenage drama, but what makes Pretty Little Liars special is the unique and extensive Transmedia universe built around the program. Transmedia storytelling is the use of various different media platforms to add to and support an original storyline. In the case of Pretty Little Liars, the most monumental platforms used are social media, spin-offs and second screens. Through these means, the creators have been able to develop an entire world around the Pretty Little Liars storyline, allowing viewers to further immerse themselves in the action.

Social media plays a vital role in the success and maintenance of this Transmedia brand. An array of social media channels are used to support the storyline including Facebook and Instagram, however the most groundbreaking of their collection is the shows Twitter campaign. Through these means, Pretty Little Liars has been able to directly engage audiences in a personal and accessible manner. Given the target market for the show, social media remains the most effective way to actively involve their audience in the creative process.

One of the many uses for Twitter in this case has been to monitor the popularity of characters, allowing the creators to adapt the program to further please audiences. For example, if a character gains too much negative attention or is deemed boring, the creators move towards removing them from the show or limiting their screen time. This direct communication channel not only gives modern audiences the power they crave, but allows the program to remain in high demand.

In terms of the programs Transmedia campaign, Twitter extends the storyline by voicing the thoughts of characters through their own personal accounts. These accounts are used to give viewers additional (and often revealing) information regarding the mysteries in the show, in addition to humanising the characters themselves.

The most popular of these accounts is that of Mona Vanderwaal, through whom the program was able to launch an online scavenger hunt. This campaign took viewers on a journey though carious social media channels to eventually unlock a 2 minute video that served as Mona’s online diary. This video, not aired anywhere else, gave dedicated viewers the opportunity for inside knowledge and an exclusive preview into Mona’s personal plans.

This aspect of Pretty Little Liars‘ Transmedia campaign has seen an incredible response particularly throughout 2013-14. In fact, the return of season 3 saw Pretty Little Liars-related Tweets accounting for 52% of overall Twitter activity in early 2013! Or (to be more precise) 39,000 tweets per minute and 1.4 million overall mentions on Twitter!

The first Pretty Little Liars spin-off we have seen was the 8-part webseries release in 2012 by the name of Pretty Dirty Secrets. This extension on the original program allowed for a deeper look into the inner workings of the area and provided viewers with inside information to certain suspicious on goings. It was through this series that the character of Shana was first introduced.

This webseries, although short-lived, proved to be a highly successful and beneficial addition to the Pretty Little Liars Transmedia campaign. Each episode saw between 200 000- 600 000 viewers, with over a million people viewing the entire webseries! This campaign engaged viewers and gave them the additional information they needed to become further engulfed in the storyline.

Perhaps one of the highlights of this Transmedia campaign, though, is the spinoff TV series that runs alongside the drama of Pretty Little Liars, the newly released Ravenswood. Stealing one of the more popular characters of the show, Hannah’s boyfriend Caleb, this show diverges from the original storyline mid-season 3 and follows Caleb’s adventures through the neighboring town of Ravenswood.

The incorporation of the second screen into the viewing of television programs is a Transmedia trend used within popular programs today. Originally introduced by NBC for their programs Breaking Bad and The Walking Dead, the second screen essentially involves an app designated to run alongside the original program. This app is viewed on a phone, computer or tablet and enhances the viewing experience by allowing the viewer to engage with additional material during viewing.

Pretty Little Liars has made use of this trend, creating an app called “PLL Second Screen Halloween Party” which was linked to Facebook during the airing of their 2013 Halloween special. Throughout the airing, viewers were able to activate the app on their second screens and participate in a range of bonus materials. One of the most popular elements of this app was the exclusive and revealing sneak peek to the show’s winter season.

Although this Transmedia platform has been used in many past programs, Pretty Little Liars was able to make their version unique and groundbreaking. Unlike any application of its type, it opened a direct line of communication between actors and viewers, allowing each second screen user to ask 2 questions to any main actor and have them respond directly. This was the first time ABC had used such means to communication with actors, and the reception proved more than positive. 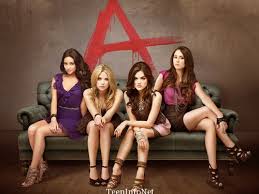 Pretty Little Liars has used a Transmedia storytelling campaign to build a strong and interactive relationship with its fan base, allowing them to participate in a unique viewing experience unlike anything else. This program has used a collaboration of social media, spin-off and second screen campaigns to create a community behind the brand and demonstrate the benefits of Transmedia storytelling.

Posted on Jan 31, 2014 by
Nicola Kahler
I study the entertainment industries, drawn mainly to film and TV. I love psychological thrillers and unsettling themes. That being said... give me a good chick flick any day
Edited by Misagh.
Follow