Trigun’s Vash the Stampede: The Struggles of Eternal Optimism 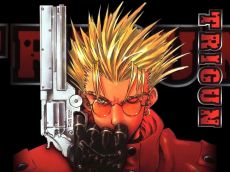 Trigun‘s Vash the Stampede is a text book case of “perception vs reality.” From the very beginning of Yasuhiro Nightow’s dystopian space-western, the name ‘Vash the Stampede’ inspired fear and brought about horror stories of towns reduced to vacant piles of rubble. Known as the Humanoid Typhoon, this mysterious figure is seen as enough of a threat to the government that they placed a 60 billion double dollar bounty on his head. However, when you see the man behind the name, fear is hardly the first thing that comes to mind. In fact, he’s such a goofy and non-threatening figure that Milly and Meryl, the agents of the Bernandelli Insurance Company sent to evaluate claims said to be caused by Vash, have a hard time believing he is the real deal.

The way that he is spoken of, you’d expect a menacing, hulking figure with constant steely eyes and an aura of danger without a word being spoken. The actual man who had become categorized as a localized disaster was just a lanky, trench coat wearing klutz with spiky hair. Although his appearance and demeanor come as a surprise, his reputation as a supremely skilled gunslinger is not. Most doubt of his identity is immediately wiped away when he’s in action, as he lives up to the legend, with the exception of lethal force. While the tall, goofy gunman is not the bringer of death and destruction which has become synonymous with his name, that doesn’t mean that the towns aren’t worse for wear whenever he arrives on the scene.

The Humanoid Typhoon is never one to bring the storm, but it ‘s never too far behind him no matter where he went. Whether it comes in the form of imitators attempting to cash in on the instant intimidation that Vash’s name invoked, or people seeking to inflict physical and psychological harm upon him, trouble has a way of following the man with bounty on his head. As the ladies of the insurance company were quick to find out, while Vash is much more interested in food than fighting, conflict seems to always find him. However, the continuous sense of danger hadn’t hindered his belief in a better world. Despite all the attempts from villains to hurt him and those close to him, he never falters on his positive nature.

Vash the Stampede possesses a very unorthodox view of the world, in comparison to the rest of the citizens in the lawless land that they live in. His assertion that the world is full of love and peace lies in stark contrast to the desolate state of every town he ventures to coupled with the bleak outlooks of the inhabitants. Vash self-described “hunter of peace, searching for the mayfly known as love,” has an upbeat attitude that’s as much of a weapon as his gun. Nicholas D. Wolfwood, who frequently fights alongside Vash in many of his altercations, prefers to rely on his embedded set of principles and practicality, rather than viewing everything through a lens of sunshine and rainbows. Being man of the cloth who is also a skilled gunman, Wolfwood provides a more grounded sense of justice as he states, “We’re not like God. Not only are our powers limited, but we sometimes have to play the Devil.” The relationship between the two men shows the disconnect between undying positivity and necessary reality.

Allies are off-put by the fact that he always attempted to bargain for a non-violent solution, no matter the clear intentions of the enemy. Enemies become perturbed by the fact that someone whose life in in jeopardy is able to keep such a sunny disposition, no matter how much of a detriment to his life they feel they are. It is this form of optimism that has proven itself to be a great ally to someone who lives such a perilous life that Vash does. However, it is that same optimism that proves to be as formidable of a opponent as any he had faced.

Although his name is frequently associated with negative results, Vash the Stampede is somewhat of a protector of the towns that he visits. There’s always a fair amount of damage done when he leaves, but that shouldn’t discount the damage that could have been done had he not been there. It proves to be an immense burden to put on one’s self, but he personally takes responsibility for the possibility of life and death that occurs on his watch. That goes for himself, his allies, innocent bystanders, and even his foes.

His personal accountability for the mortality of those around him is not simply a creation of his own set of morals, but also a promise to his mother figure, Rem Saverem that firmly believed that no one has the right to take the life of another. Similar to superheroes like Batman or Superman, Vash the Stampede has made a vow to himself not to kill. And not unlike those heroes, sticking to that creed has caused a great deal of additional harm to him and others that would have not suffered otherwise. In the same vein that Bruce Wayne and the people of Gotham would have been much better off had Batman just killed the Joker early on in their rivalry, Vash could have spared himself a lot of grief had he not had this attitude towards his enemies in the Gung-Ho Guns, led by Legato Bluesummers. No matter who it was, the pain of others had an adverse affect on his psyche.

This extreme sense of empathy is seen as the ace in the hole for anyone with him in his or her crosshairs. The fact that Vash the Stampede was more than willing to put himself through hell in order to keep the population level was his tragic flaw. The very flaw that was seen by Legato and the Guns, and subsequently exploited. The goal was always to leverage his life against other, and at times loved ones. It is at this time where Wolfwood’s words begin to hold weight.

Louis Armstrong’s lyrics, “Nobody knows the trouble I’ve seen,” is very true of Vash’s life and throughout the anime and manga, it has a very evident effect on him physically and mentally. In many instances, that bright outlook is the only thing that keeps him going, since there’s been so much pain during his existence. He’s despised by many of the people he’s given his all to protect, and frequently falls into spells of depression and deep recollection of the pain he’s caused indirectly, no matter how hard he tries to help. His brother Knives Millions is the antithesis of what Vash has become, and seems to be in better shape because of it. Knives’ deep hatred for humans has helped him avoid the dangers of protecting them, something that has broken his brother down to his core. No matter how many times Knives attempts to convince Vash to forgo the danger and join him, Vash continues to reject the notion that humans are not worth saving.

That philosophy is what makes Vash the Stampede, Vash the Stampede. In general, having an optimistic view of life is a very helpful thing. Nonetheless, there are many cases where pessimism becomes either the best, or only option that leads to positive results. It is that he makes constantly makes the decision of which viewpoint to take, but in the fact that he chooses to remain optimistic despite the toll it takes on his body and mind. He’s not one to get the praise that Superman gets or have the luxury of living another life like Batman, but his heroics lie in the fact Vash gets either and remains an everlasting champion of peace and love.

Posted on Jan 18, 2015 by
Dominique Kollie
Freelance writer interested in Music, Sports, Anime, and many other artforms. College student interested in writing for a major publication by day, and writing comics by night
Edited by Mary Awad, Jessica M Farrugia, Ryan Errington.
Follow