Under the Radar: The top 5 underrated endings in (relatively) recent film

The endings are always the most enticing part of the movie-going experience; there is something special about knowing how it all turns out. We were all excited for Christopher Nolan’s third and final installment in his ‘Dark Knight’ trilogy: 1. Because we wanted to see Bane and 2. We wanted to know how it was all going to end, whether or not Batman was going to die.

The audience (generally) looks forward to this moment of clarity, where everything comes to light, and the moral of the story is revealed. However, the most impactful endings are the ones that get us to consider alternate possibilities; possibilities that we would not have otherwise considered. They do this by either revealing something new to us or, just sometimes, nothing new at all.

Now we all know of the great, classic endings of all-time, such as: The Usual Suspects, Fight Club, Casablanca, and many others; however, allow me to try and get you to consider other impactful, more recent, endings.

Towards the end, no matter where you were in terms of wrapping your head around the movie, everybody suddenly started thinking the same thing when Commissioner, excuse me, Sergeant Gordon handed Batman the playing card- even before Batman flips it over! Even though Batman means well by what he is doing, there are still consequences for his actions and this ending makes sure that the audience is keeping that in mind while, at the same time, getting us pumped for the next movie!

What starts out as a generic mystery/suspense thriller starring Nicholas Cage slowly cocoons itself with the linings of darker, much deeper goings-on. By the end, Knowing has completely evolved into the more hopeful story of starting anew. Add to this the revelation of a savior-like extraterrestrial species and the total inhalation of the entire planet, and you get one of the most bitter-sweet endings in film… ever.

OK, maybe I can’t exactly call this an “underrated” ending seeing is how it only came out recently, but it’s probably not too far of a leap to assume that this movie will probably fall by the wayside (unfortunately). Usually in a slasher flick, the killer dies and is brought back to life through some supernatural means. But The Collection isn’t concerned with tradition. No. Instead, it gives the protagonist (and victim) of two films a chance to exact long, overdue justice upon its demented, mortal antagonist- something that rarely occurs in a genre specified as “Horror.” 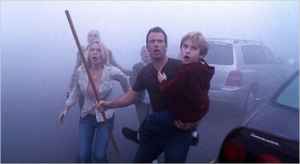 The Mist explores a lot of different aspects of humanity. Among these are: fear, loyalty to friends and family, and the effects of religion as well as faith (in God and otherwise). By the end, the main characters have lost their faith and their will to live. What’s great about this ending is that it visually shows the consequences of giving up and giving in like they do. It also qualifies as one of the most horrific endings in the Horror genre…

If you have not yet seen Dogville, watch it. It stands as a masterful, disturbingly earnest examination of humanity, its occasional tendency towards evil doings, and the harsh consequences that can follow such behavior. Lars von Trier’s innovative thriller will have you second guessing your world views by its jaw-dropping finale.

Posted on Dec 4, 2012 by
Jordan David
Born and raised in the Great Lakes State of Michigan. I work as a projectionist at the local movie theater and study film/ video at Grand Valley State University.
Follow