Zombies have been used in comedies in the past, certainly Shaun of the Dead and Zombieland come to mind when such a horrific topic has been turned into a rather enjoyable experience. Still, there is going to be a new comedy in town that might give these two a run for their money: Warm Bodies is set to premier on the first of February next year with a cure for zombies! 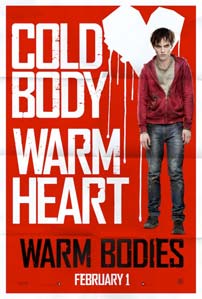 Jonathan Levine, who some might know as the director of 50/50, has found inspiration from Isaac Marion’s novel Warm Bodies and is putting it on the big screen. Together with Nicholas Hoult, Teresa Palmer, Dave Franco and the amazing John Malkovich, the movie is going to tell a story about a zombie R (Hoult), he only recalls the first letter of his name, who falls in love with girl named Julie (Palmer). With that being the basic plot of the movie, the overall twist is revealed: there is a cure for zombies and it is most definitely love itself. Though it sounds a bit too pink and fluffy, comedy and laughter, based on the trailer, seem to be guaranteed along side with great performances from the cast starting with Hoult himself.

If not that, then certainly this innovative way of portraying a zombie story line deserves a chance and hopefully those fans who enjoy their zombies cold and ready to bite will be also pleased. Besides, if heartless zombies can become human again, one could be warmed up to the idea of seeing this one when it hits the cinemas.

Posted on Nov 22, 2012 by
Getter Trumsi
Student by day and a movie-blogger by night, I love to watch movies and TV-shows but not as much as I love writing about them.
Follow