Disclaimer: This article contains material which could easily been seen as offensive… because said material is pretty offensive, but it’s material from another era and interesting from a historical perspective. I apologise if anyone is upset by the images and content featured below, they are pretty unpleasant. 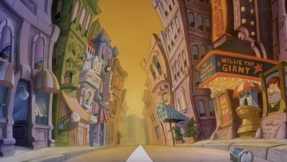 Cartoon characters, they’re an adorable bunch, right? Picture them, with all their bright colours and big eyes, singing merry melodies and going on exciting capers, like Toon Town from Who Framed Roger Rabbit? Nothing could be more charming, innocent and inoffensive than a wholesome cartoon creature. Sure, there are some bad seeds, like Fritz the Cat (and pretty much anything else Robert Crumb ever came up with), and adult cartoons like Archer and South Park, but otherwise cartoons are fun for all the family, right?

Well, as it turns out, maybe not. If you look back into the murky past of animation, you’ll find something more than a little disturbing, like discovering Nazi memorabilia in your beloved grandfather’s basement: animation used to be really, really racist. Like, Michael Richards’ stand-up level racist. So racist that, even if I tried to describe it, it wouldn’t really do it justice. What’s worse is that a lot of the horrible things being said and done are being said and done by beloved characters like Bugs Bunny.

Yes, it’s true, far from being the cute, cuddly benign figures of our childhoods, cartoons have a dark, unpleasant, racist past. Of course, most, if not all, of these cartoons have not been shown on TV during my lifetime, and most are subject to deservedly heavy censorship by, not only the authorities, but the companies that own them. You know that something has to be pretty inflammatory when the people who own it withhold it from public consumption for fear of causing offence.

The best and most well-known example of this kind of restraint has to be the infamous (and titular) Censored Eleven, eleven cartoons withheld from distribution and syndication by United Artists in 1968. Since that time, they have never been released on VHS, but have been screened at select animation festivals. They can also be readily found on YouTube, although, be warned, they do contain some pretty nasty material.

The earliest of the eleven shorts is Hittin’ the Trail for Happy Land, a lively piece mostly set on-board a steamship. Made over 80 years ago, in 1931, the animation could be best described as of its time, with heavily exaggerated motions, limited lip-synching, and black and white cartoon animals smiling while they play musical instruments. Of the eleven, it is probably the least objectionable, because the oblique references to “Uncle Tom” are directed at a cartoon dog with very few stereotypical features. 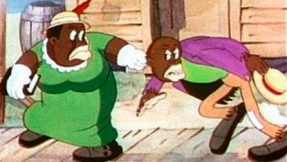 When the cartoons graduated to colour, however, the offensiveness sky-rocketed. Sunday Go to Meetin’ Time was made five years later in 1936 and is the second oldest of the Censored Eleven. It features one of the things that later became a hallmark of this particular sub-genre of animation, portraying African Americans as having lips so large and pale that, in some cases, they look more like beaks. Clearly, these portrayals were influenced by blackface and minstrel shows. It also features extensive use of pidgin English, but, for all of its faults, it is still not even nearly the most offensive of the bunch.

In terms of the worst of the bunch, it’s a tie between three or four of the later cartoons, including the similarly themed The Isle of Pingo Pongo and Jungle Jitters, both of which revolve around extremely troubling portrayals of native Africans. In the former, they engage in cannibalism (of sorts) and, in the latter, they seem to only dance around playing jazz music. In both, the populations are shown as being dim-witted, lazy and are, again, drawn in the same stereotypical fashion (with Pingo Pongo being a particularly obscene example) to the point that they barely seem human.

The ones that stick in the mind most, though, are the two contributions from Bob Clampett, Tin Pan Alley Cats and the unfortunately titled Coal Black and de Sebben Dwarves. It’s a shame that they’re so racist, really, because these two are actually pretty good in a lot of ways: they feature some excellent animation and great jazz scores. Unfortunately, they also rely the exact same stereotypes as the previously mentioned animations. 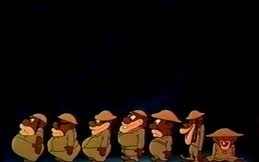 Easily the worst of the two is Coal Black and de Sebben Dwarves (the name does give it away a bit), which features on particularly unsavoury joke about a kill squad that charges for everyone else, but kills “Japs” for free. Yep, you read that correctly. The rest of the content is similarly distasteful, with every character being one grotesque caricature or another, beginning with a dancing scat-man with a gold tooth. As with the others, it is easy to see how offensive the short is, but the creator, Bob Clampett, might not be so easy to pigeonhole.

Coal Black came about when Clampett was approached by the cast of an all-black musical, with whom he collaborated closely in the creation of the piece. By his own account, the whole process was respectful and done with mutual admiration after they specifically requested that a cartoon be made featuring black characters. Now, the veracity of these claims cannot really be assessed here by me, but they do raise an interesting point. How much of these cartoons is deliberate and malicious racism, and how much is simply the result of the time in which they were produced?

Don’t get me wrong, clearly the content in these shorts in unacceptable, but how much can be forgiven of the creators and, more to the point, how much can we look past their dubious content to see the artistic merit within? Bob Clampett, so I have heard, was inspired to make these shorts by hanging out at black clubs and soaking up the jazz music. You can tell by the way he directs the shorts that he has genuine affection for the music included. Unlike some of the other pieces, which can be seen as purely malicious, the Clampett pieces can be redeemed. Similarly, Clampett himself can be understood as something other than massively racist. 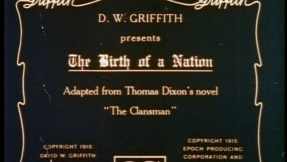 The analogy, from an artistic side, would be the D. W. Griffith classic Birth of a Nation, which features the uneasy pairing of technical and narrative mastery, with horrible, horrible racism. It is widely accepted that Birth of a Nation is an extremely important piece of cinema, despite its more troubling content, and is regarded as one of the best films ever made. The same is often said of Coal Black, but the issue of whether art can be redeemed despite racist, or other offensive, content remains.

There’s another trend that I noticed when you look at the banned cartoons and other cartoons from the era. Those that have escaped censorship almost invariably feature anthropomorphised talking animals singing, dancing and generally having a merry old time. The banned cartoons have the same essential structure and premise on the whole, with one key ingredient altered: in the place of animals, you have black folks. In that time period, black people, it would seem, were seen as little more than animals that could talk (in animation at least). Now, I think that’s a dozen times worse than the offensive drawings or the speech patterns. It’s the way that they were employed in the same way as a talking dog that is the truly disturbing part of all this.

In any case, it would seem that Coal Black was at least made without malice at the heart of its creator’s intent. It is simply an unfortunate throwback to a time when that was simply how you drew black people in cartoons. Others, like some of the ones I mentioned, are far worse. Some are downright horrendous. The worst I can think of is not part of the censored eleven, and was made during World War 2 as a piece of propaganda. Its name is Bugs Bunny Nips the Nips. 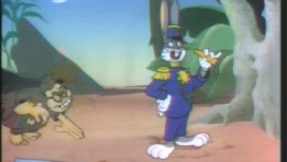 That’s right, Nips the Nips. With a title like that, there can be no mistaking the intent behind it. This little charmer features one of the most virulently offensive portrayals of an Asian I have ever seen. Think Mickey Rooney in Breakfast at Tiffany’s, then turn it up to eleven. I’m talking buck-teeth, slanty-eyes and constant, unintillegible, vaguely Asian-sounding yammering. Really, it’s quite repulsive, but it gets worse when (spoiler alert) Bugs Bunny tricks the Japanese into eating grenades and blowing themselves up. Yep, this is a cartoon where Bugs Bunny teaches kids that it’s fun to kill Japanese people.

I find these cartoons interesting. It isn’t because I have any racist inclinations myself, or look at them and laugh. They’re just fascinating as historical documents. You look at them and you get a window into a very different time and place, and you realise that, while the world as it exists today is far from perfect, it’s one hell of a lot better than it was back then. You only need look at the reaction to the “film” The Innocence of Muslims to see how different things are. There is a case to be made that pieces like these should be included in school curricula on the subject of the history of race relations, simply to demonstrate what used to be acceptable, provided, of course, that they were shown in the correct context. At the very least, they are a disturbing document of the one of the ways in which we used to dehumanise and denigrate our fellow human beings.

They also raise the issue of how best to evaluate the creators of this kind of work. Are they genuinely and actively despicable, or is it down entirely to the time in which they lived? I’ve already written about Bob Clampett working closely with the all-black cast who more or less commissioned Coal Black. Can he honestly be said to have been a racist on the strength of the work, or is it just unfortunate that what was seen as acceptable, or even cool, then is considered unacceptable now? This debate can be applied to any number of pieces, like the works of Leni Riefenstahl, and won’t be solved. If I, however, had to come to some manner of conclusion on the issue, I’d say that such people can be forgiven for transgressions induced by the standards of the time, and that these works can be appreciated from a technical and artistic standpoint, even if you have to ignore the more unsavoury aspects.

Of course, most of these ancient and censored cartoons have no such merit, and should probably just be avoided.

Posted on Jul 25, 2013 by
Christopher Dibsdall
I'm a law graduate with no interest in the law, but a deep and lifelong passion for film, music, TV and video games... but mostly film.
Follow

Is the World Ready for an LGBTQ Disney Princess (or Prince)?
The Appeal of the female characters in Arcane: League of Legends
The nature of Self in Centaurworld
Steven Universe and Fascism
Why Space Jam Worked
Disney’s Live Action Remakes: Who are they for?
Children’s Animation and “Bad Behavior”