What Does ‘Attack on Titan’ Really Mean?

Every anime season, there always tends to be the one that stands out far above the rest with the full force of fan popularity. In the Spring of 2013, it was the dark military drama about humanity on the brink of extinction due to the threat of huge humanoid horrors who mindlessly consume humans, the last of whom are forced to live behind massive walls, called Shingeki no Kyojin (or in English Attack on Titan). It’s not hard to see why this anime has become so popular – our own Justin Wu wrote a piece on those exact reasons. But there are bigger questions concerning this series, the most notable of which is “what does it all mean?” After all, such a startlingly creative and horrifying series is up to interpretation as to its deepest metaphors and crucial symbolism. So here are some of my theories on some possible interpretations of the show as it stands.

Please understand that there may be some spoilers for the anime in this article.

A Metaphor About The Other Side of War 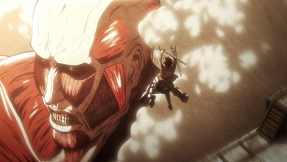 We can all agree that, for the most part, history is written by the winners. Our historical perspective on war comes from whoever was deemed the victor, or at least deemed themselves to be with their influence and power. It’s a lot easier to see ourselves as the triumphant army, on the side of good, than the “others.” But who are these others in the context of modern warfare? What does war looking like from their perspective, as they try to fight an uphill war, out manned, out gunned, and falling fast? Titans, in this light, can be viewed as the enemy occupation, who are stronger and more well equipped than humans, who consume their lives for no good reason – not for hunger (need of resources) but for the seemingly mindless destruction of a people hopelessly outmatched. There are third parties, an endless array of politics, and even different philosophies on war. This metaphor seems the most straight forward as the entire series is about the war between humans and titans, so its not a far leap from war between humans and monsters, and between two set of humans. Even in the story, they mention how foolish humans were for fighting one another, and should have realized how precious life is.

This theory takes a lot from the shows first opening song Guren no Yumiya, meaning Crimson Bow and Arrow. The song begins with the German line, “Seid ihr das Essen? Nein, wir sind der Jäger!” This translates to “Are we the food/prey? No, we are the hunter!” The line reflects the dual role of the main characters in the show who are both the hunters of Titans as well as their prey. Titans are more than just the shows main antagonists, they are also the main mystery. We don’t where they came from, why they ingest people, if there are more efficient ways of killing them, etc. Do they feel pain, fear, hatred, joy? Their behavior is incomprehensible to human beings, making them scarier than other humans. The show is about the role reversal, or at least the attempt at it. As such this can be a show about survival against incomprehensible events or creatures, determined not to be swallowed up by it.

Pulling this idea to its extreme, it could be about not being swallowed by large issues or societies. But Titans don’t represent much in terms of actual issues, though acting as agents of a society that ingest the weak could be one. The other extreme is that the show could be making a commentary on vegetarian-ism. This is super stretching it, and highly implausible, but hear me out. Human in this case represent animals, and Titans represent us. Aa animals, we are the helpless creatures who can fight back but are more likely to be slaughtered, viewing this bigger, constantly smiling creatures, in this case Titans, killing them and ingesting them at a rate that is unnecessary for their own nutrition but just to eat. It’s probably wrong but it is interesting to think about.

This theory is what I like to call the “Evangelion” theory. For those of you who don’t know, Neon Genesis Evangelion is one of the most well-known and debated series in the anime fandom. Often, some theories associated with the show included that the characters and their situations were representations of mental diseases (depression, anxiety, etc.) or about spiritual or personal issues (self-identity, morality, etc.). As such, this type of explanation can be applied to many different series, including Shingeki no Kyojin. The connection has an extra connection to Evangelion because like the walls of the city, the Eva pilots have a barrier called an Absolute Terror Field (A.T.F) which separates them from the angels, which has been interpreted by many as the barriers we put up around ourselves metaphorically to keep others from both knowing us completely and hurting us. 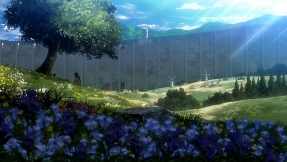 If we look at it from this perspective, Eren Jaeger, the main character, could be viewed as rage, as it is only by feelings of anger and pain fuel his transformation. Mikasa Ackerman, another cadet could be viewed as stoic, since she seems more walled off or emotionally distant, while Armin Alert would likely be anxiety. This is, however, where the larger metaphor for the show being the human experience falls apart, as there are many other characters involved in the series, and not all of them can be representative of emotions/mental illnesses/human conditions. Still, the idea of the wall attacking as a metaphorical barrier as well as a literal one is plausible.

The Power of the Human Will

Willpower in this show is an incredibly important theme in the show, especially because many of the characters spend the majority of their time ignoring their survival instincts and attacking huge monsters whose single mentality is to eat them. This theory goes even further than that, especially when you look at the individual characters. Eren represents the will to kill Titans because that is his only go and keeps him going in the show. His will is a destructive one that is beneficial to society – the warrior’s will. Mikasa, while killing Titans in the show, is less preoccupied by this act but more so protecting Eren, representing the will to protect. While you may think that this is sexist because Mikasa is a female, there are other women in the show that don’t show this same will. Sasha shows the will to eat, i.e. hunger in the literal sense of the term, due to lack of food in her region and Hanji represents the will to learn, or the will to understand, as she performs experiments on captured Titans. 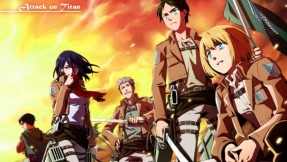 Armin, the least capable of the fighters, also show the will to learn, but he is less interested in understanding Titans the way Hanji is and more so to see the outside world that the Titans have made impossible to see. Connie Springer represents the will to fight in the face of personal fear as he has been represented one of the more frightened characters. In terms of which will he represents, Jean Kirschtein is one of the most difficult to pin down. He is rather stubborn and opposed to fighting, but he has been a noted strategist due to ability to understand weakness. The most accurate fit, I believe, is that Jean represents the will to carry on, the will that does not actively seek to engage in fighting, but will do so out of necessity, and is in fact quite good at it. All of the characters show a desire of some sort surrounding their situation with the Titans, be it active or passive, and all of them share the will to survive. It is these wills, it would seem, that keep our characters stable and moving forward.

The most obvious of the theories concerning the theories is that the show is a thesis on duty and allegiance. These are the two big question put into play at the beginning of the show, especially once the kids begin their training. Eren, in contrast to the beliefs of many of the other cadets, believes that those are the best at fighting should not go to the King’s guard, but go out on the front lines and fight in order to protect the city, if not the survey team that goes out and attempts to find ways to make it to the outer wall. Eren believe those who can fight have the duty of fighting rather than choosing the most privilege position. Jean disagrees – mostly because he does not want to die but also because the King, as their leader, has to remain protected. Mikasa feels her duty is to be with, and protect, Eren out of a sense of love and debt. Ultimately, what does does duty, and what specifically is the duty of the able when the end of humanity is on the line? This is a big question looming in the early episodes of the show, and will resurface as it catches up with the manga.

The theme of allegiance is also a huge topic once Eren’s powers are discovered. Should they swear allegiance to their King, a distant and ultimately useless leader? To humanity? To their commanders? Each other? Themselves? Do they owe it to themselves to survive or give up in their lives in the hope that it will help humanity continue? Does Eren align himself to humans, to Titans, to no one, being able to transform as he can? Who should we pledge our allegiance too, and what is our own personal duty to each other and our world at large? This whole show could be about these interpersonal relationships and how the choices we make not only affect us but the people around us, and even human kind as a whole.

Do you have your own theories?

Posted on Aug 15, 2013 by
Sara Roncero-Menendez
Contributing writer for The Artifice.
Follow