5 Reasons Why ‘Attack on Titan’ Is So Popular

Click in any websites about this season’s anime, and chance is likely that you’ll come across Attack on Titan (Shingeki no Kyojin) almost immediately. Every anime fan is talking about it. Every anime fan is watching it. Its immense popularity is almost unprecedented, compared to other anime in recent years. But why is that the case? 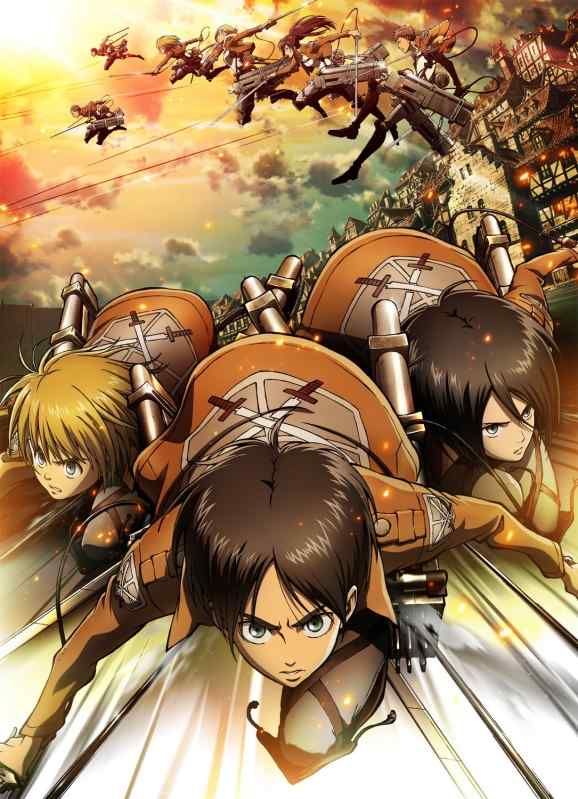 The anime is adapted from the manga series of the same name, written and illustrated by Hajime Isayama. Set in an alternate universe, Attack on Titan took place in year 743 when a group of titans, giant creatures that were 3 to 15 meters tall and looked strikingly similar to human beings, appeared out of nowhere and drove humanity almost into extinction. The survived men built three sets of tall, solid walls surrounding their capital to keep the titans out. A hundred and two years of peace followed, until suddenly a 60-meter titan began attacking the outermost wall. When the wall was broken, other titans entered the city to kill and eat civilians living in that area. Ten-year-old Eren Jaeger, who witnessed his own mother being consumed by a titan, vowed revenge against the titans and desired to wipe out their existence on earth. He joined the Training Corps that trained people to become soldiers to fight against the titans, and five years later, his first battle with the titans began…

On a glance, Attack on Titan has a rather simple plot that seems promising to sell. However, it has become such a sensation among anime fans that surprises everyone. In recent years we have popular series like K-On, Bakemonogatari and Puella Magi Madoka Magica, but these series are often criticized for various reasons. Attack on Titan, on the other hand, almost receives universal praise. I think there are five reasons why that’s the case.

Attack on Titan has a typical shounen storyline: Eren swearing to avenge his dead mother and his journey against very formidable opponents. He had encountered failure in training, but his strong and determined will of eliminating all titans made him overcome the obstacles and he became a strong soldier. Whenever there was a difficulty, he would remember his dead mother and did anything he could, however reckless his actions might be, to kill the titans. He despised people who only wanted a comfortable lifestyle and thought everyone should fight the titans. He was the typical protagonist you see in any shounen shows: passionate, courageous, acting before thinking.

Aside from Eren’s teenage rage, there are many moments in the anime where the people, citizens and soldiers, freaked out because of the titans. A character would then ask for them to remember those who had fought with their lives to protect them, and urge them to never give up, and then everyone would untie together. It almost sounds cliché that it happens once every couple episodes, but that’s why the positive message of the anime appeals to many. It’s almost like as long as they had faith, then everything would be alright.

A popular show demands lovable characters that viewers will talk about, particularly a great female character when the show’s target audience is adolescent males. Attack on Titan has Mikasa Ackerman, the female protagonist who was very loyal to Eren and would literally do anything for him. Her ambiguous relationship with Eren (step-sister/childhood friend/potential girlfriend) makes her a big talking point of the series. She was even willing to kill other soldiers if that meant protecting Eren’s life (as seen in episode 9 and 10). A lot of fan-arts online are about how protective/possessive Mikasa is over Eren, to the point that she is often considered the masculine husband in the relationship while Eren is the weak, needy wife. Gender stereotype, yes, but it successfully sparks discussion.

Then we have Armin, Eren’s childhood friend who was the brain of the group. He was soft-spoken and physically weak, lacked confidence and worried a lot. However, when in danger he was the one who could come up with a plan to save everyone else. What made him appealing, however, were not his intellect but his feminine traits and appearance. Due to his femininity fans often joke that he is actually the real female protagonist of the series, and create fan-arts where he wears skirt and ‘successfully seduces’ all the males in his class. Much like Hideyoshi Kinoshita from Baka and Test, or Totsuka Saiga from My Teen Romantic Comedy, Armin is a boy that fans like to think of as a girl. Armin has become an androgynous male among fans. Even though this probably was not the intention of the production company, his character design again successfully sparks discussion among fans.

The other characters do not get as much appearances as Eren, Mikasa and Armin. However, fans will be sure to look forward to Levi, the proclaimed mankind’s strongest soldier. He is a favorite among manga readers, after all, for his coolness and his infamous shortness (160cm). As he was now properly introduced in episode 13, there would be more of him to come.

If you want to sell, you need fan service. That’s why we have series like Infinite Stratos and To-Love-Ru that have basically no content but only fan service. In contrary, there is almost not a scene of fan service so far in Attack of Titan (up to episode 13).

What about pretty female characters? There are different types of beautiful girls: Mikasa and Annie, the cool beauty; Sasha, the clumsy one and nicknamed as ‘Potato Girl’ due to her debut appearance; Krista, the kind ‘goddess’; and Ymir, the one romantically attached to Krista. However, apart from Mikasa the others were not featured prominently in the series so far. There was some yuri tension between Krista and Ymir, but it was not elaborated much. We don’t see any flash of panties or the female characters wearing swimsuits/sexy outfits for no particular reason. This allows the series to really focus on the plot, emphasizing more on the action of fighting titans than teenage romance.

Really, the only fan service you’ll get is the naked bodies of the titans.

This is related to my first point about how the show is a typical shounen series. It makes the show very easy to follow. It’s very straight-forward and you don’t need to think too much about the plot, because it lays out everything for you. In other words, it tells, not shows. Most character’s thoughts were narrated thoroughly that it left almost no rooms for second-guessing what they really were thinking. Apart from Eren’s transformation into a giant titan, there is hardly any twist that is surprising.

Even the good guys and the bad guys are easy to distinguish. In episode five a wealthy merchant refused to let people pass through the gate as he wanted his cargo to go through first. An aristocrat also wanted a top-class general to stay by his side instead of going to the frontline, when a titan was attacking the city. Here, the rich were basically all portrayed as weak and needy, and were indifferent to the lives of the peasants. They were obviously the bad guys who did not give a damn about the lower class.

The good guys were people like Eren, who would fight with their lives. They felt sorry for the lives lost, but at the same time they fought hard so their comrades would not die in vain. Even those who originally were pessimistic about fighting the overwhelmingly powerful titans later were determined to engage in battles as well. All the soldiers were the good guys here, even if some were not as determined in eliminating the titans (Then, of course, anyone who reads the manga will know things will turn much complicated later on).

1. Easily generalized… to anything

The idea of Attack on Titan is about fighting against the monster that tried to ruin your life, when your seemingly content life so far is actually just an illusion of success. The lyrics of the OP echo this kind of passion.

“O pigs who laugh at the resolve to walk over corpses to move forward. Livestock complacency? False prosperity? Give us the freedom of dying starving wolves!”

Here’s a jab at the fake sense of prosperity and stability that humanity lived in. People knew the titans were out there, somewhere, but they chose to ignore the threat until it was too late. Eren saw through this and wanted to make a change. Like a dying, starving wolf, he preferred to live as a free individual rather than as a person trapped in this counterfeit utopia that would fall very soon.

The ‘titans’ and the ‘people’ then become an interesting contrast of the ‘strong’ versus the ‘weak’. These titans could be generalized to anything: the government, the mainstream media, any influential, political, religious group. You name it. The point is that they are so powerful that you can never completely get rid of them in your life. Like the peasants in Attack on Titan, you either succumb to it and accept it as your fate, or try to resist their invasion by all means.

We can substitute ‘titan versus people’ with contrast such as ‘monarchy versus peasants’ or ‘rich versus poor’. There was also a brief mention of the unfairness of the class system in the anime, and the viewers can think of that as a jab at the wealthy in the world, like the Occupy Wall Street movement in 2011. People also perceive this relation as a strong political message: some Japanese and Taiwanese think of the titans as the emerging China that poses a threat to Japan’s economy and culture; some Koreans think of the titan versus people’ idea as Japan’s reemerging militarism, as right-wing politicians return to the political stage in Japan’s recent election; some in Hong Kong see the titans as powerful businessmen and the Chinese government who are trying to dominate every aspect of their lives. Whether these claims are valid or not is another matter. The point is that everyone can easily put Attack on Titan’s situation into their own shoes. They can relate to the show in different ways.

Overall, Attack on Titan is a very entertaining anime of much passion and action. However, it lacks the substance to become an anime to be remembered. It tells too much and shows too little. Unlike anime like Shinsekai Yori or PsychoPass, it does not give people much room for thoughts, as everything is too clear-cut, either black or white. Let’s just hope the second-half of the season will get better.

Posted on Jul 3, 2013 by
Justin
Contributing writer for The Artifice.
Follow