If for some reason like myself, you found that Ninja Assassin had sold out and deemed it wise to substitute the viewing with 2009’s Old Dogs, then maybe you’re in the same boat as I am, as to how on Earth this film was put out. It’s a literal train wreck, the visual equivalent of a Spinal Tap album, no coherence. So to feed my curiosity, and somehow come to terms with this atrocity, I did some research. The deep annals of the Internet revealed to me that, Old Dogs was originally conceived and shot as an R-Rated film. The children’s film stars John Travolta and Robin Williams as two successful sport agents. When an old gal reenters the life of Dan (Williams), he is compelled to swoon her away, what he doesn’t know is she has kids now, and what he’s even more unaware of is that they’re his kids. I know it sounds like a decent idea, but I walked out. And I’ve only walked out of one other film (Red Riding Hood). My date and I ditched that popsicle stand and went to Taco Bell.

Upon completion of a film, studios usually host test screenings to get feedback from audiences. It’s a chance to see how a film might perform and also an excellent chance for a director to realize what is needed and what is not from his cut (Django Unchained, Jaws). Well sometimes films do so poorly at these test screenings that producers get psyched into re-cutting or sometimes re-shooting an entire film (Halloween 6: The Curse of Michael Myers). In the case of Old Dogs as you probably guessed, it was one of those films that didn’t do so well in the screenings. At some point Touchstone Pictures (a branch of the Walt Disney Company) decided to re-cut the 107 minute film by a heavy 19 minutes, the resulting 88 minute cut is the sobering version of Old Dogs we have today. After a resubmitting to the ratings board, the film was then passed on directly to Disney to distribute, most likely to help sell the film as a children’s movie. 19 minutes seems like such a small amount of time to drastically change a film’s rating, but I can believe it. It only takes a couple well placed “fuck’s” to get that red band. If you’ve seen the film, than maybe you’ll agree with me that it sort of makes sense. That scene with Robin Williams in the bathroom with his kids, and that terrifying face they warp Travolta’s smile into after he takes to many drugs, they all feel like sticky R-Rated situations.

The film ultimately was a “success”. While critics panned it with an iron fist (literally not one good review), it grossed close to 50 million on a budget of 30 million, and that doesn’t even include everything on the back end. If ever there was an example to undermine the power of criticism, there it is. The whole thing about this is, it’s only a rumor. There’s never been an official statement about all this R-Rated cut, only a removed post on IMDB’s trivia section of the film. So really this could just be a farce. But I’d like to thing that somewhere in the Disney vaults, right next to The Lion King maybe, there is an awful R-Rated film that will probably site there till time has had it’s way with it. 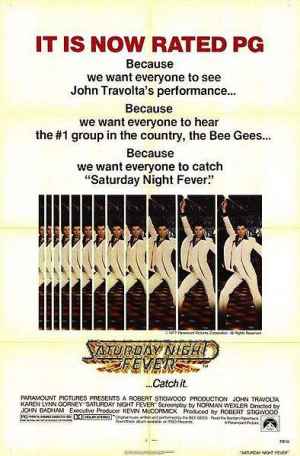 It’s not the first time a studio has done this to improve their intake, hell it’s not even the first time they’ve done this for a John Travolta film. Notoriously the 1977 smash hit Saturday Night Fever was re-edited into a PG cut. One the basis that they wanted everyone to; “see John Travolta’s performance…”, “hear the #1 group in the country, the Bee Gees…”, and “catch the Saturday Night Fever”. I won’t flaunt any expertise on Saturday Night Fever since I’ve never seen the film, though I religiously listen to the soundtrack and I know that I sort of look like the “DeeJay” in the film, Monty Rock III. It’s just one of those films that’s slipped my catalog. I actually purchased a copy once, but left it in the changing room of a Levi’s Outlet. The film was actually more successful in PG format (no really, more people are allowed to see it at that point), and it had a heavy influence on how the sequel Staying Alive was to be made. They ultimately slapped that sucker with a PG rating too, with Sylvester Stallone directing. The R-rated version of Saturday Night Fever was rarely seen till the introduction of DVD. The television versions are all slightly heavier cuts of the PG version, and the R-rated cut didn’t make it onto home video until the avenue of Laserdisc (if anyone remembers those). I believe TNT recently started airing the R cut as a TV-14 rating, removing the nudity and profanity.

So there’s no possible way to get our hands on this film, unless we break into the Disney backlot somewhere, or someone pulls a Baby Face and finds a copyright deposit lurking in The Library of Congress vaults. Test audiences are notorious for spoiling films as much as they are for rescuing them, though something tells me the R-Rated version isn’t much of an improvement. You can put lipstick on a pig…