What can we expect from M. Night Shyamalan’s After Earth?

It has to be said: M. Night Shyamalan is a divisive figure. In a way, The Sixth Sense (his 1999 breakout feature) has become a heavy load for the writer/director to carry, and has since seen him struggle to match the atmospheric horror of the film that put him on the map. Personally – and I’m sure some would agree – I feel his output has been good, but has lacked the panache of The Sixth Sense. Unbreakable, his directorial follow-up, brought him more good will, but it wasn’t quite what everyone was expecting. In its own right, it is an excellent examination of comic-book superhero tropes, and a true one-off in its execution…but it didn’t have Mischa Barton vomiting in a tent or Hayley Joel Osment freaking everyone out. It did, however, have an oppressive atmosphere of otherness; that what we were seeing wasn’t quite the whole picture, not quite the world as we know it.

Fast forward to today, and Shyamalan is still trying to wash the critic-applied stink off of himself after a trio of poorly-received films (Lady in the Water, The Happening, The Last Airbender). In hindsight, I’d argue that its pretty easy to forgive his perceived mistakes. Lady in the Water – which I didn’t mind one bit – was a passion project. Can you blame a guy for gambling on a film based on a bedtime story he’d written for his kids? I don’t think I can. The Happening was far from great, but again, it doesn’t fail as an homage to the hokey “invisible terror” films of yester-year. The Last Airbender was always going to be difficult. For me, Avatar is one of the best animated shows of all time, and any adaptation was going to be tricky. Shyamalan clearly had a love of the material, but maybe naively underestimated just how difficult the project was.

His last film, Devil, is one I really enjoyed. It played like an extended episode of The Outer Limits, with a keep-you-guessing feel to it that has been missing in his work since The Village. As a result, I go into the upcoming After Earth with a certain amount of hope. So, in an ideal world where Shyamalan hits all the right notes, just what can we expect from After Earth? 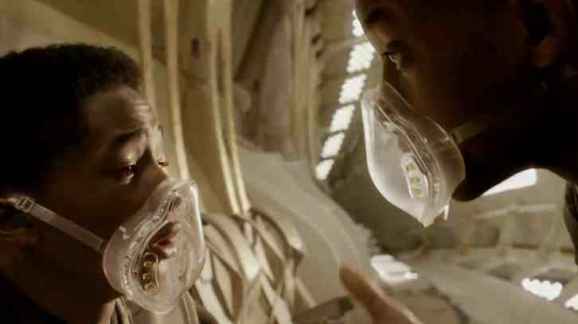 One of the hallmarks of Shyamalan’s work is that, on paper, the premise is always attention-grabbing. Even his weaker films sound fascinating when you describe them. Lady in the Water: apartment complex fairy-tale. The Happening: an unknown force drives people to suicide (granted, some people would say that The Happening was the force that stirred an innate desire for self-harm). After Earth sounds like a winner. A father and son are forced to crash-land their space craft on a now unrecognisable Earth, and the son (Kitai, played by Jaden Smith) must negotiate the harsh landscape to find the vessel’s rescue beacon and save his dying father (Cypher – Will Smith).

I don’t know about you, but this idea of a dangerous, humanity-free Earth pulls me in. I’m thinking Planet of the Apes with a dash of The Road and a smattering of Avatar-like beastly encounters (in scope, not in giant blueness). Truth is, if you approach this from a purely plot-focused point-of-view, After Earth has the potential to be a very good movie indeed. 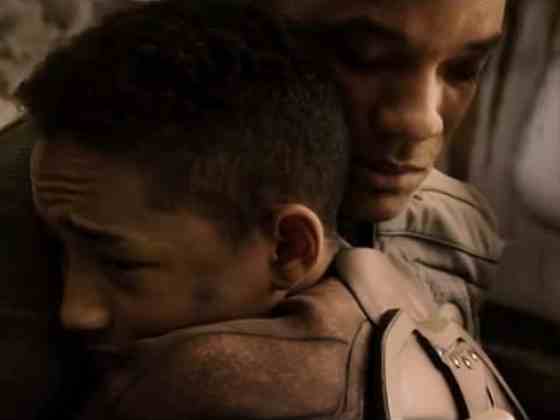 It’s always interesting to see what happens with child actors when they lose the “adorable” factor. Hayley Joel Osment’s genuine innocence convinced in The Sixth Sense, but seeing him more recently with patchy stubble in police mug-shots is disconcerting to say the least. Jaden Smith filled roles in The Pursuit of Happyness and The Karate Kid with typical child actor gusto. In his early teens now, he is at the crossroads that all youngsters must face in showbiz. Based on what he does in After Earth as well as the next few years, Jaden Smith will either make a graceful transition into genuine actor, or be exposed as not having the talent required to succeed as an adult in film.

Will he ultimately pull a Christian Bale or a Hayley Joel Osment? It’s difficult to say so early on, but I’m always rooting for new talent, and I really hope that Jaden can rise to the occasion. Judging by the premise, he will have to carry the brunt of the dramatic load, which is potentially a risk on the part of the film when you have another star as bankable as Will Smith taking a back seat. This will be a big test for Jaden. Let’s hope he can impress and begin the process of stepping out of his father’s A-list shadow. A stumble here wouldn’t be disastrous, but it won’t help with his progress. 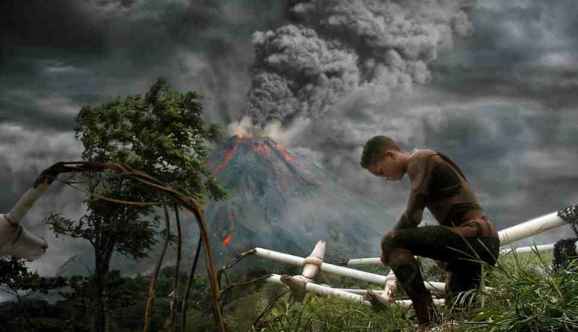 Looking at the trailer, we have an interesting mix of Sci-fi machinery and breath-taking vistas to admire. This film marks a return to Sci-fi for Shyamalan, who found some success with his human drama-driven Signs; but After Earth is clearly operating on a much larger scale, and with a bigger budget. Cinematographer Peter Suschitzky should be a familiar name to some, with work ranging from The Empire Strikes Back to the more recent Cosmopolis. Regardless of what you think of either of those films, they’re very well photographed; and with a special effects team that contains members who have worked on Star Trek (2009), Avengers Assemble and Shutter Island, this is shaping up to be a visual feast.

The fact that James Newton Howard is on music duty should take care of things in the atmosphere department. This guy has eight Oscar nominations in musical categories, including nods for his slick work on Michael Clayton and The Fugitive, as well as the foreboding score for The Village. He also worked with Hans Zimmer on The Dark Knight, so this guy has seen and done it all in his field. With his varied experience, the material he comes out with for After Earth could potentially have the combination of gentle disquiet and action-framing intensity that has typified Howard’s career thus far.

1. A True Return to Form

M. Night Shyamalan has within him the potential to make films that are great. He has done it before, and there’s no reason he can’t do it again. However, it is difficult to come back from the kind of critical battering his films have taken over the past 6 years. After Earth could prove to be the ideal remedy to his slump. Devil at least works as a counter-punch against his detractors, and showed that there is still fight in the man. If After Earth is a success, this could be the beginning of Shyamalan regaining the kind of groove that marked him as a genuine talent just over a decade ago.

I can guess that the doubters will not be won over by the trailer or the concept. Shyamalan’s name alone will put people off, which is a shame, as this could be the perfect opportunity for him to bounce back. Stephen Gagham has taken the lead on scripting with Shyamalan in support, which will hopefully take a lot of pressure off him, and give him the freedom to re-establish himself as a director. Not to mention the fact that Gagham scripted the dense Syriana and won an Oscar for his efforts on Traffic. With all the talent across the board to back him up, I find it unlikely that Shyamalan will fail here. However, if he does, he will face a mammoth task in winning over the movie-going public. I for one would love him to knock one out of the park. A good M. Night Shyamalan film is a win for any movie fan.

Posted on Dec 13, 2012 by
David Tatlow
You can call me Tatt. I like all kinds of films, as well as talking to/boring people about them at great length, so brace yourself.
Follow