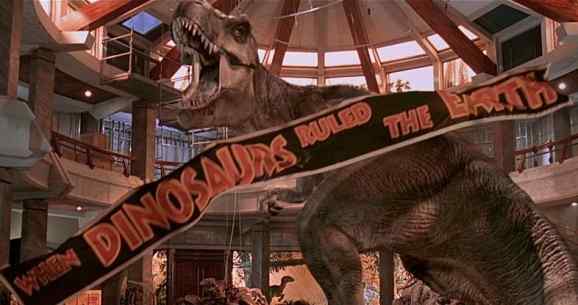 It is a truth universally acknowledged that kids love dinosaurs. I was no exception. I can’t remember when I first saw them, but there’s this ancient picture book in my bookcase that probably started the fascination. Perhaps it’s because they looked so bizarre, or that I had to use my imagination to bring them to life – how they moved, sounded, interacted. In the pictures I drew and the games I played, the world of dinosaurs was also an epic stage for stories – battles between good guys and bad guys, fighting for survival, and ultimately doomed by an asteroid (or abducted by aliens.)

So when Jurassic Park came on TV one night, I made my parents tape it for me. As I learned years later, they edited out the most violent bits, so Samuel L. Jackson and several others simply disappeared from the film. But as far as I could tell, Spielberg had brought dinosaurs to life like the geneticists in the movie. I couldn’t begin to guess how many times I watched that tape, but I know that after a while, I had to find more dinosaur movies. My search led me to some old films and some contemporary ones; to some that were brilliant, and to some that deserve extinction. Now that Colin Trevorrow (Safety Not Guaranteed) is set to direct Jurassic Park IV, it seems like the perfect time to look back at the movies one dinosaur-obsessed kid turned to in the wake of Jurassic Park. 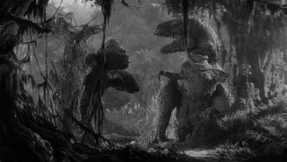 John Hammond would have saved himself a whole lot of money if only he’d made it to Skull Island. It’s like Isla Nublar without the cloning and corporate espionage, a lethal paradise where giant monsters have evolved naturally. Apart from a massive gorilla, the island is home to some incredibly hostile dinosaurs (being a herbivore apparently isn’t an obstacle to eating somebody.) Despite his formidable supporting cast, Kong proves he’s king by punching a Tyrannosaurus Rex to death. Peter Jackson’s 2005 remake tweaked the narrative slightly and allowed WETA Digital to flex its CGI muscles, but the original’s stop-motion creatures are genuine movie magic. Jurassic Park explores similar themes to King Kong; they’re both cautionary tales for greedy profiteers and those who would mess with nature. And, in an interesting twist of fate, Jurassic Park‘s sequel The Lost World pays direct homage to Kong by putting the T-Rex in a similar situation; the monster is brought to San Diego to be the first attraction in a new dinosaur park, but breaks loose and rampages through the city. 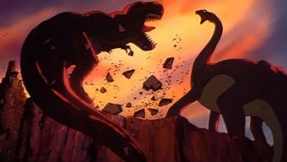 Sharptooth! Before Jurassic Park turned the T-Rex into a badass anti-hero, it was the ultimate prehistoric villain. The Land Before Time gave us one of the most menacing incarnations of the carnivore ever. This animated feature from Don Bluth (An American Tail) is arguably the best of the ‘talking dinosaur’ subgenre. Set in the aftermath of a mass extinction, it follows a young Apatorsaurus called Littlefoot, who searches desperately for the utopic Great Valley. Along the way he’s joined by Cera (a Triceratops), Spike (Stegosaurus), Petrie (Pteradon) and Ducky (Saurolophus), and only together do they have a shot at surviving. It hits a pitch-perfect balance between seriousness and fun; while Littlefoot and his buddies have an incredible adventure, it gets quite dark and packs a real emotional heft. If you think the death of Bambi’s mother is sad, there’s a scene in Land Before Time that gives it a run for it’s money. And on top of all that comes James Horner’s captivating original score. They don’t make ’em like this anymore. 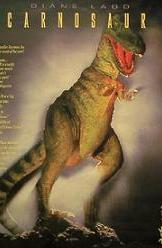 And now we come to the Jurassic Park cash-ins, and none is more shameless than Carnosaur. This 6-foot turkey was put into production by B-movie master Roger Corman to compete with Spielberg’s dino blockbuster. It also featured crazy scientists cloning dinosaurs that escape and run amok. On top of that, there’s a freak virus that makes women die giving birth to baby dinosaurs (there’s more than a little debt to Alien there.) With a fraction of Jurassic Park‘s budget and a double helping of blood and gore, Carnosaur is great for a cheap laugh – and, as my 7-year-old self found out, it was also great for a nightmare. Carnosaur spawned two sequels that re-used footage from the original, as well as the spinoff Raptor starring Eric Roberts (of The Dark Knight and… Sharktopus.) Of all the awful monster films that emerged after Jurassic Park, Carnosaur takes the cake – with the possible exception of Chicken Park, an Italian parody about giant chickens that needs to be seen to be believed. 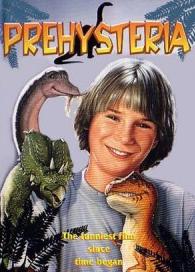 Way down the other end of the spectrum lies Prehysteria, a G-rated sugar rush so cute and family friendly that rewatching it causes intense physical pain. It’s got a solid 3.2/10 on IMDb – and those 3.2 stars all belong to the miniature dancing Triceratops. That’s right – the dinosaurs dance. Farmer Frank Taylor farmer trades some fossils with a shady museum curator, and mistakenly ends up taking home some mysterious eggs that hatch into chicken-sized versions of popular dinosaurs. As the Taylors come to terms with their impossible new pets, they also grow stronger as a family. If you’ve seen the Beethoven series, just swap out the lovable St. Bernard for mini-dinosaurs and you’ll know what you’re in for. The tagline proclaims Prehysteria as “The funniest film since time began”; replace “funniest” with “worst”, and it’s essentially true. 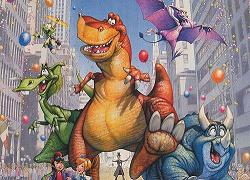 This one is just plain wacky – and believe it or not, it was actually produced by Spielberg and his team. The plot kicks off with crazy scientist Captain Neweyes, who travels 65 million years back in time to feed dinosaurs “Brain Gain” cereal that causes them to develop human-level intelligence and the power of speech. He brings them back to the present day to give kids the chance to see real dinosaurs. They befriend a runaway boy and a lonely girl, but Neweyes’ evil brother Professor Screweyes plans to turn the friendly dinosaurs back into savage monsters for his circus. I can’t imagine how this movie was pitched to the studio, but I’m glad they gave it a chance. It’s the only film I recall that addresses the two halves of dinosaurs’ pop cultural legacy – on one hand, they’re movie monsters, wild and dangerous; but they also have a child-friendly incarnation in kids shows, toys and colouring-in books. Granted, that’s not something I was thinking about at age 6. I just fast-forwarded to the part where Rex goes apeshit. 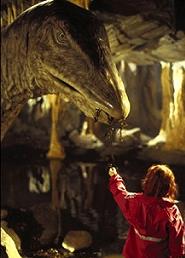 Spoilers ahead, spoilers to the left, spoilers everywhere. Dr. John Dempsey is a skeptic; he doesnt’ believe in Nessie, and that’s why he’s sent to Loch Ness – to debunk the myth once and for all. Well, he’s proven wrong in a pretty memorable fashion, when not one but two massive plesiosaurs show up beneath Urqhart Castle. It’s corny at times, the special effects have dated, and Nessie(s) doesn’t show for 95 per cent of the movie. But it somehow Loch Ness captures our fascination with extinct animals, evoking a sense of wonder not unlike what we feel during the big reveal of the Brachiosaurus in Jurassic Park. Perhaps there’s a sense of loss as well, as we think to ourselves “if only.” And then comes the realisation… that Dempsey is played by the guy from Becker. 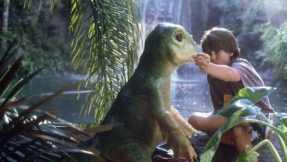 I first caught sight of Gargantua at my local video store. On the cover was what looked like a glaring dinosaur eye. That eye promised thrills, danger, and a terrifying monster; that eye lied to me. ‘Gargantua’ is basically a giant, nasty iguana that stomps around a tropical island in pursuit of Adam Baldwin. Throw in a kid that befriends the monster’s baby, an obvious conservation agenda, and stock military characters who just want to shoot everything, and you’ve got yourself a cross between Jurassic Park, King Kong, and just about every monster movie in history. The result was so forgettable, it’s not even on Wikipedia. Thankfully, my gargantuan disappointment was lifted by… 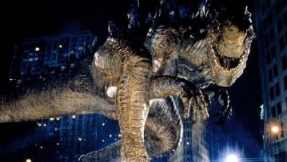 Fans of Godzilla are still tearing shreds off Roland Emmerich’s remake. Well, haters gonna hate. From a kid’s point of view – in which acting ability, faithfulness to the original, and cheesy dialogue are simply not factors – this movie was a blast (literally – count the explosions.) Emmerich basically rebuilds Godzilla as a giant silver T-Rex and throws him at the Big Apple to hunt Ferris Bueller. Also present are 200 baby Godzillas that tear up Madison Square Garden in a sequence that pays heavy homage to JP’‘s raptors in the kitchen. This overblown blockbuster won’t go down as a classic, but it’s incredibly fun. It even manages to create genuine suspense in the opening scenes; like Jaws the monster remains hidden, while the carnage it causes sends our imaginations into overdrive. Godzilla is currently getting the reboot treatment from Gareth Edwards (Monsters), a second chance for Hollywood to redeem itself with Godzilla’s loyal fans. But for pure mindless escapism, Emmerich’s Godzilla delivers. 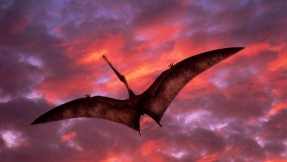 Ok, so it’s not a movie – but it soothed the Jurassic Park blues like nothing else. Walking With Dinosaurs presents itself as an observational nature documentary, integrating CGI dinosaurs with practical effects and live-action backgrounds. There aren’t any talking heads – just footage overlaid with Kenneth Branaugh’s hypnotic narration. There were six episodes in total, each focusing on a different time in the reign of the dinosaurs. And each episode is a stand-alone story – we follow a pod of young Diplodocus struggling to survive, or an old Ornithocheirus’ epic flight to the mating grounds. Like the best nature documentaries, Walking With Dinosaurs creates characters and narratives around the lives of these animals. It spawned plenty of imitators, but none – especially not the over-enthusiastic Jurassic Fight Club – are as good as this. 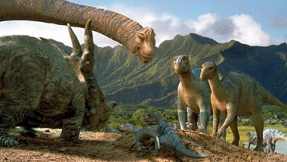 It’s essentially the same story as The Land Before Time – a bunch of hero herbivores survive a mass extinction and journey towards a mythical valley of plenty. Dinosaur’s title characters are talkers as well, except for the villainous Carnotaurs. It’s a gorgeous film to look at, and it injects some fresh blood into the proceedings by featuring a family of lemurs that fall in with our hero Aladar the Iguanadon. But the movie’s best sequence comes right at the beginning, before any dinos start talking: a Carnotaurus attack sets in motion the journey that takes Aladar’s egg to the lemurs. While ultimately predictable, it’s still heartwarming and sincere and a reminder of everything we love about dinosaurs.

Eventually, we have to move on (or evolve, if you prefer.) New interests take over, and we grow up. But every now and then, one of these movies will surface on TV or in a discount bin, and bring to the surface my crazy inner kid with a wild imagination – the kid who worshipped Jurassic Park and anything dinosaur-related. Trevorrow recently said of JP4 “I’d want people to feel like it’s the last day of 6th grade again.” What a great way to sum up the feelings of wonder, optimism and awe that make Jurassic Park, and dinosaurs in general, so special.

Posted on Jul 9, 2013 by
Bill Scheggia
Contributing writer for The Artifice.
Follow