3 documentaries about the silent era you should not miss

I love a good documentary. In fact I very often like a documentary about something more than I like the thing itself. As much as I enjoy a good silent movie, the stories behind them can be even more entertaining. There are few people alive that remember this period of cinema history so these documentaries are the only examples we have left, except the films themselves, to answer questions and enlighten us. The working methods and personalities behind classic films are every bit as important as the films themselves. To that end, here are three excellent documentaries about the silent film era.

Unknown Chaplin is probably the most well know of the three I will be mentioning and it is the only one officially available for purchase in the U.S. Available on DVD since 2003, this amazing documentary was a British production that was shown in the U.S. on the PBS show American Masters in 1986. It is divided into three sections with each detailing a different part of Chaplin’s amazing career. The emphasis of this documentary is on works rarely or never seen by the public before. Chaplin’s outtakes and rushes are used to illustrate his working habits and meticulous way of working out gags and stories.

The first section is called My Happiest Years and covers the period of time Chaplin spent under contract to Mutual. A grueling contract and tight production schedule made Charlie very productive, but artistically he was never very happy with the films made during this period. The footage used here had never seen the light of day, before this documentary, and it is amazing. Take after take to get an idea right, every one magic all by itself. After spending an inordinate amount of time working out some stunning gags, Chaplin would often abandon them in favor of starting over. 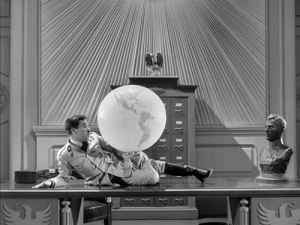 The second section called, The Great Director, details the making of the films Chaplin did without creative interference such as The Kid, The Gold Rush and City Lights. City lights is one of my favorite films and seeing the detail and agony Chaplin put into every second of this movie is incredibly special. The entire plot of the movie hinges on one scene and Chaplin struggled for just over a year making it work.

The third section, Hidden Treasures, is all rare personal home movies and completed but unused scenes from films. These include the original unused opening to City Lights and the entirety of footage shot and cut together for an unreleased film called The Professor.

Definitely worth searching out on DVD, this documentary is an absolute must for any fan of films or any would-be film maker. Narrated by Chaplin’s friend James Mason, it is an amazing glimpse into the mind of a film genius.

The shortest and least satisfying silent movie era documentary on my list is Harold Lloyd: The Third Genius. This documentary shows very well the contrasting styles of Lloyd and Chaplin. While Charlie Chaplin was an obsessed genius, working constantly to reach the perfection he knew he never could, Lloyd was a businessman first, a performer second and a comedian third. Lloyd never officially directed his films, but instead exerted a quiet creative control and was not as concerned about getting the credit. Lloyd’s total film output was greater than Chaplin and Buster Keaton combined and yet he is all but forgotten today.

The Third Genius is fairly straightforward in how it tells the story of Lloyd’s life and career by making use of a great deal of interview footage of Lloyd himself. Lloyd discusses his films very plainly and seems to view them as just another job he did long ago. His films were so much more than that though. Lloyd refined the ‘thrill comedy’ genre that became his trademark.

One of the reasons that Lloyd is so poorly remembered today is that he never allowed his films wider release in later years. He retained control over most of them and resisted any attempt to market the films once he felt there was no audience for them. He deliberately set a high price to re-exhibit or show them on television so his work was rarely seen after his retirement. When his work was seen, it was presented with poor video quality and shown at music speed (the film was sped up to match the speed of the music paired with it). It wasn’t until the late 90’s that a renewed interest in Lloyd’s films saw releases of better quality. 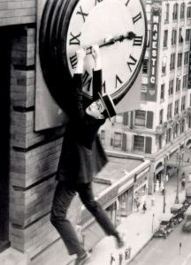 The documentary shows never before revealed clues as to the methods of creating some of Lloyd’s most thrilling moments and they should not be missed. Unfortunately, you will have to really search this one out. It is not commercially available in the U.S. though it can be found in small segments on YouTube. I was able to order my copy from a guy in Brazil, but you didn’t hear that from me. Search this one out on YouTube if nothing else it is worth a look. 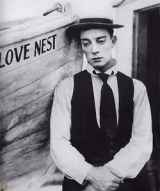 This amazing documentary is my personal favorite of the three. Like The Third Genius, Buster Keaton: A Hard Act to Follow is narrated by Lindsay Anderson and is a deep, personal look at Buster Keaton the man and the filmmaker. If Chaplin was an obsessed genius and Lloyd a business and technical genius, then Keaton is most definitely a dark and troubled genius. His entire life, shown here with much depth and detail, was not always a fun one. ‘The Great Stone Face’, as he was called, was often more than just an act. While he was clearly someone who loved life, the feeling did not seem mutual.

Keaton started in vaudeville as a toddler and was already a veteran performer when he began his film career at age 21 working with Roscoe “Fatty” Arbuckle. When he moved into solo films at his own studio, Keaton began a period of productivity from 1920 to 1929 unmatched in scope or quality by any of his contemporaries.

This Emmy-winning documentary was done in three parts, and is a more intense personal study of Keaton the filmmaker. Extensive use of film clips interwoven with interviews with Keaton and his widow Eleanor, paint a picture of an amazing life. Keaton is shown as an instinctive comic inventor with a Rube Goldberg-like sense of gags. Impossible visuals were his stock in trade and this film shows some of Keaton’s most amazing creations. You really have not lived until you have seen Keaton standing next to a piano where he puts one then the other leg on top of it. The comedian seems to hang there until both legs are firmly planted on top of the piano before gravity remembers it has a job to do. The fact that this and other ‘impossible’ gags were not faked is an astonishing testament to the effort Buster would spend on his work, often at considerable risk to his physical well-being.

Keaton would not just fall down for a stunt. Every bit of physical action was like an acrobatic act and you find the word ‘impossible’ coming to mind. Even after seeing it with your own eyes, sometimes on reruns of live 1950’s TV, you try to convince yourself that there must be some kind of trick used. Keaton’s films and gags were like that.

Once he lost creative control after the financial failure of The General (now considered his masterpiece), the quality of the films began to suffer. He began to drink and his life all but fell apart. The turning point was his marriage to Eleanor Norris. Twenty-three years his junior, Eleanor saved him and Keaton began to work again. It would be easy to feel depressed about this documentary, but Keaton worked until his final days and never stopped being a film genius. The documentary’s candid view of Keaton and his obvious passion for his movies will leave the viewer feeling he lived the life he strove for.

This is another film you will struggle to find as it has never been released in North America on DVD. It is out there on YouTube and can be found if you are willing to go out into the darker corners of the Internet. Make the effort. This documentary is worth it.

Words like ‘amazing’, ‘astonishing’ and ‘unbelievable’ are very easy to over use but they are all apt descriptions of these documentaries and three of the most brilliant artists to ever grace the silver screen.

Posted on Dec 7, 2012 by
Taylor Ramsey
While I quietly wait for a really good excuse to go on an interstate mayhem spree, I read comics and watch movies. While I do the "writing" here, my wife makes it readable.
Follow