Batman has had so many great adventures over the years that there are just too many to name. While there are many graphic novels featuring the Dark Knight that can be inserted into this top five, I believe that these specific five titles should be read by any fan or anyone interested in getting into Batman. You can also post your top 5 in the comments, and please discuss! 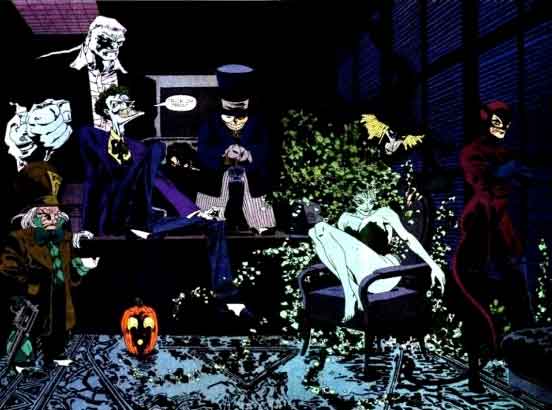 The Long Halloween tells the story of Holiday, a mysterious killer who murders people on holidays. Once a month to be exact. With the help of Harvey Dent and Lieutenant James Gordon, Batman tries to discover the identity of Holiday before he claims his victim of the month. While investigating the Holiday murders, Batman is also attempting to stop a war between Gotham’s most powerful crime families, Falcone and Maroni.

This book is important and awesome for so many reasons. It serves as the main introduction for the villain The Calander Man, who serves the story very much like Hannibal Lecter did in Silent of the Lambs. He knows the true identity of Holiday, but plays games with Batman by giving him riddles and hints from his Arkham cell. It may not seem original, but it works. The graphic novel also serves as a great origin for Two Face. The relationship built between Batman, Gordon and Dent really makes his transition into a villain very effective and emotional. Christopher Nolan’s The Dark Knight borrowed heavily from this book when it came to that relationship dynamic. The best aspect of the book is the Holiday mystery itself. This is probably the best story showcasing Batman’s detective skills, and proves why he’s the world’s greatest detective and Jeff Loeb does a brilliant job at keeping the mystery fresh. Combine that with Tim Sale’s great artwork and a huge rogues’ gallery of villains appearing, you got yourself an amazing Batman story. 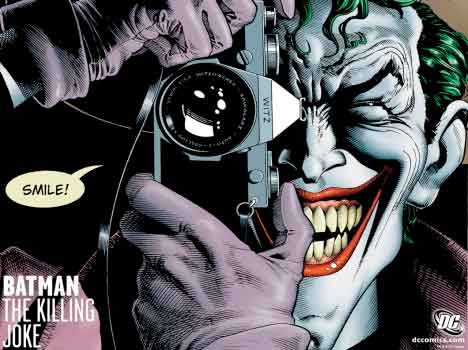 The Killing Joke is a one-shot graphic novel written by Alan Moore that revolves around the Joker’s plan to drive Gotham City’s Police Commissioner James Gordon insane, and intercuts with flashbacks of the villain’s past before becoming Joker.

The Killing Joke is the ultimate story for Joker fans. He’s at his most evil in this story, but Moore paints a tragic past for the character that gives some emotional weight to his insanity. Still though, he’s one evil bastard. He indeed does some disturbing things in this story, and tries to prove what happened to him could happen to any upstanding citizen who just has one bad day. Batman really questions his moral code in this book, but actually feels some sympathy for the Joker. The Killing Joke also serves as an origin for Barbara Gordon’s turn as Oracle. I won’t describe what happens here, but it’s indeed heart breaking. Brian Bolland’s art is also to be celebrated and his great use of colors really fits the story being told. There’s a deluxe hardcover edition released back in 2008 that features recolored artwork by Bolland that tones it down a bit. I still prefer the original coloring from John Higgins, but the deluxe edition proves to be pretty effective in its own right. Like I said, if you’re a fan of the Joker, read this book. Alan Moore provides the greatest characterization of the character that I’ve read, and the Joker actually makes Batman laugh! 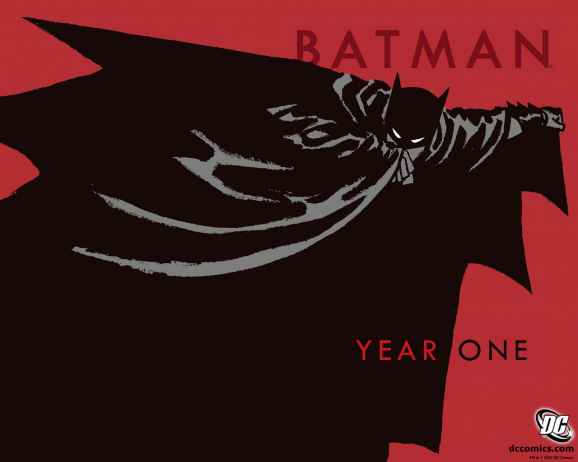 Written by Frank Miller, Batman: Year One essentially recounts the origins of Bruce Wayne becoming Batman and Jim Gordon’s career in the Gotham City Police Department. Both are familiarized with the violence and corruption of Gotham City, and look to deal with the problem in their own way. The story shifts perspectives between Wayne and Gordon, and establishes a very grisly Gotham. After a 12 year hiatus, Wayne returns to Gotham from abroad while he was training in martial arts, science and man-hunting. Gordon, with his wife Barabara, moves to Gotham after being transferred from Chicago. We see the lengths Wayne goes to creating Batman and Gordon’s everyday dealings within the corrupt police department.

That’s the story in a nutshell. Again, this is a story that heavily influenced Christoper Nolan’s Batman films, particularly Batman Begins. Even the ending of that film is a direct copy of the ending of the comic. This is the definitive Batman origin, but also serves as a strong story for Jim Gordon. Gordon is such an underrated character, so it’s nice to see him be featured prominently in this story and the impact his job has on his personal life. Year One is considered one of, if not the best comic ever written by many fans. Definitely the best Batman comic put into print because no other book has captured Batman and Gordon’s humanity so well. The characterization is so real, and the comic features some of the best artwork I’ve seen in a book from David Mazzucchelli. Batman: Year One is a must read for every comic fan! 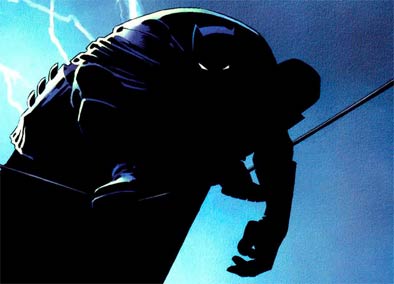 Frank Miller’s The Dark Knight Returns tells the story of a 55-year-old Bruce Wayne coming out of retirement to fight crime once again as Batman. Upon his return, he faces heavy opposition from the Gotham City police department and the United States government.

This is another classic tale from Frank Miller. Before even hearing about this comic, I always wondered what it would be like when Bruce Wayne became too old to be Batman. Well Miller supplied me with the answer when I finally purchased the graphic novel, and I thought it was so thought provoking. He paints a Gotham City in such horrible shape, that it’s screaming for Bruce to be Batman again. This isn’t the Batman we are used to when he was in his prime. This Batman is old and mentally not ready to take up the cowl again, so essentially he’s kinda feeling forced to return. That’s the feeling established at first, but we all know Bruce needs Batman and Miller’s writing is effective in developing this aspect of the story. He supplies an intense, no remorse villain in the Mutant leader who is a physical juggernaut. Batman feels that he’s the only one capable of stopping a man like this, and resorts to extremes in dealing with the matter that he’s never contemplated before. We actually see Batman question his moral code in regards to dealing with the Mutant leader, but he sticks by his no-killing policy. There’s just so much to love about this story. It has so many layers, thus repeated visits to the book is required. Miller’s artwork is a sight to behold. No one could clutter up a page so much, but still allow it to have some flow. It’s truly masterful. The book has many detractors, mainly feeling this isn’t the Batman they grew up with and destroying everything Bob Kane established with the character, but I feel Miller accomplished something that is definitely unique. Batman was cool again thanks to The Dark Knight Returns. 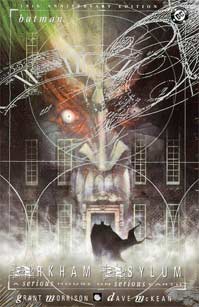 Written by Grant Morrison, this story revolves around the inmates of Arkham Asylum taking over the facility and threatening to murder the staff if Batman doesn’t agree to meet them inside. Batman, believing it’s most likely a trap, obliges when the Joker kills a guard to finally lure him in. Once inside, Batman is essentially forced into a game of hide and seek by the Joker.

Arkham Asylum: A Serious House on Serious Earth is pretty much the closest you’re going to get to a Horror story starring Batman. The main contributing factor to this is Dave McKean’s disturbing artwork, which is so damn beautiful but scary. I actually felt somewhat uncomfortable while reading it, but it’s so damn effective. It really gels with the insanity exhibited by the inmates of Arkham Asylum, particularly the Joker. McKean’s design of the villain really exhibits what he’s like on the inside, and he’s right at home in this story. All the villains’ designs are worth it for anyone to pick this up, especially Two Face and Scarecrow. Another fun part about the book is Gasper Saladino’s lettering. Each character is given a distinct style to how their dialogue is written on the page. For example, the Joker’s lettering is splattered and manic. It’s a really great idea and serves the story incredibly well. While the art is a huge reason why you should read this book, Grant Morrison’s psychology experiment with the characters is the real star. There are different characterizations than we’re used to reading in Batman comics, and it makes the book worth checking out. Even Batman is almost driven utterly insane during his short stay in the asylum, which a lot of his enemies believe is where he belongs. No one has dealt with the character’s sanity so brilliantly as Morrison. By delving deep into each villain’s insanity, he makes the reader actually question if Batman belongs in Arkham Asylum. It’s pretty damn impressive, and that’s why this graphic novel is on this list. It’s one of the most unique Batman stories ever to be written and is worth your time.

Posted on Nov 14, 2012 by
Mike G
I'm an absolute film buff, and love writing about movies and TV. I'm particularly a fan of Asian cinema and hope to introduce people to truly great films from that region.
Follow