Agents of S.H.I.E.L.D.: Not Another Redemption Arc

Agent Grant Ward has been a controversial character ever since the reveal that there was a “wolf in the herd the whole time”, and that he, in fact, was the wolf in question. The gruff action man seems to have acquired a legion of fans, despite his actions in the final arc of the season, many of whom are keen to see him redeemed. It’s certain that Ward is sticking around for the forseeable future, with Brett Dalton leading the charge of S.H.I.E.L.D. cast members at San Diego Comic Con, but it remains to be seen whether that’s as a recurring antagonist or as a reformed good guy. Given the number of his sins, the latter would be a disappointing and predictable choice.

The reason people seem keen to forgive the Hydra agent is obviously the attachment they formed to the character prior to the double agent twist. In the season’s earlier episodes, viewers saw Ward develop a reluctant romantic tension with Skye and an endearing opposites-attract friendship with Fitz. He was positioned as an efficient and determined hero within the team, with Ward and May leading most of the field work while Skye tapped aggressively at her laptop for vital intel, Coulson sat in his office brooding about that time he died and Fitzsimmons were finishing each other’s jargon-filled sentences in the lab. As Ward’s cool reserve softened through the season, he revealed a more playful streak (in F.Z.Z.T., Ward reveals to Jemma he overheard her impression of him by doing his own) and filled the tough older brother role within the team’s found-family dynamic.

Many of the responses to the plot twist note that it will be challenging for the writers to marry together that dorky charm with his more murderous streak, without acknowledging that his dorky charm – and literally everything he did before Turn, Turn, Turn – was nothing but an act. He did not pledge loyalty to Hydra in Turn, Turn, Turn. He had been Hydra the entire time. Any love for the Ward that had been shown before was for a person who turned out not to be authentic. The only Ward we know to be true existed in the final five episodes of season wherein we saw him killing Victoria Hand, protecting evil and deranged Garrett, attempting to bump off Fitz and Simmons, making sexually intimidating comments to Skye and holding May’s head disturbingly close to a chainsaw. It would be unreasonable to expect Fitz, Simmons, Skye and May to ever see his miserable face again.

From the little we have seen so far since Fitz and Simmons’ trauma, they are irreparably damaged by the events of the previous season. Even though Fitz was forgiving up until the moment the pod dropped, how could he possibly continue to be after Ward put Simmons in such grave danger? And if Ward’s victims – Skye, Simmons, Fitz, May – are not in a position to forgive and forget (and why on earth should they be?), how do you begin to reintegrate Ward into the team? S.H.I.E.L.D.’s work is entirely reliant on trust and after Ward’s actions, it would be plain stupid for any of the team to trust him again. Ever.

Another reason that Ward seems to be excused, by many, for his numerous crimes is that the attempted murder of Fitz and Simmons was unsuccessful. If both had been killed after Ward jettisoned their pod from the plane, would Ward’s redemption even be a prospect? The narrative choice to have it be Fitz and Simmons who Ward near-kills meant that Ward’s poisonous act was highlighted further by their total innocence.

The science duo have proved to be the most pure-hearted characters on the show, with increasing courage as the season develops (most notably: Simmons fearlessly fighting to pursue the mystery of Skye’s survival in T.A.H.I.T.I., Fitz standing up to Garrett in both Turn, Turn, Turn and Ragtag). As far as Ward understood, he was killing them. That was that. There is no way he could have known that all the factors enabling their survival would come together. In fact, the fluke nature of Fitzsimmons’ rescue is weakest plot point of the finale, though it’s made forgivable by the necessity of the event. When examining Ward’s culpability, the survival of his victims is an entirely irrelevant detail because the focus should be on his intent. Even as Fitz begged for their lives to be saved, with faith in Ward’s character until the end, Ward referred to his reluctance to murder them as “a weakness” – before promptly ensuring they sank to the bottom of the ocean. 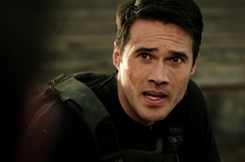 Ward was clearly a victim of abuse in his youth, but that does not justify his villainous acts. There are plenty of people, and characters, who experience troubled childhoods and grow up to not murder people. Skye, for example. The idea that one justifies the other is a troubling and damaging idea. Revealing more traumatic back-story while showing his remorse in an attempt to redeem the character seems an absurd idea at this point. People will argue he was an impressionable young teenager when he met Garrett, but ultimately, to be able to pull off the double-crossing for S.H.I.EL.D., he had to understand what good and evil was.

Throughout the season that Ward spent within the team, it was clear that he could identify Coulson, Skye, Fitz and Jemma’s behaviour as fundamentally good. It is not as though he can now spend time with the S.H.I.E.L.D. team and see, from being around them, how he should behave; he’s been with them the whole time. That was his chance for redemption and reformation. He’s spent years working for S.H.I.E.L.D. and understanding how they operate compared to Hydra. His allegiance never switched. If it were to switch now, it would be hard to argue it wasn’t simply because his mentor was gone and it was certainly in his own best interests. Having been exposed to the explicitly creepy behaviour of Garrett, which he seems to recognise as such, Ward stuck with him. Garrett does not seek to be perceived as good and just. It becomes clear in Ragtag, when Garrett’s injuries are made known, that his poor health is news to Ward. Until this point, he can only have known Garrett’s motivation for power and so his loyalty can’t be explained by his intention to help Garrett survive by any means necessary.

For many reasons, Ward’s redemption seems inevitable. Dalton seems to be an ingratiated member of the cast, and some of the interview quotes certainly point in that direction. Ward’s actions should not be excused or forgiven, though. In the past, the Marvel Cinematic Universe has proved to be a relatively optimistic universe, and while the show clearly seeks to produce a grittier second season, it would be a shame if it were completely lost to the dark side. Ward’s behaviour was unforgivable and positing him as a hero at any point down the line would be a betrayal of all his victims and of all good sense.