To be perfectly honest, I find it completely ridiculous that this debate has raged for so long. If videogames cannot be considered legitimate examples of art, than all other art forms must be illegitimate as well. For many, including myself, gaming is a way of life. The popularity of this medium is staggering, consistently ranking among the highest-selling works of entertainment media of all time. Recently Grand Theft Auto V has broken its seventh world record, earning over 1 billion US dollars mere days after its release. It goes without saying that a staggering amount of people worldwide consider themselves gamers, unfortunately however there are still many who would question the validity of videogames as a respectable art form.

All forms of art are creative works designed to illicit emotion in its audience. That’s all it really is. Before computer technology, the only games (such as chess or water polo) were by very nature competitive. They required skill, or intelligence or just simple luck to emerge victorious. Of course, it is impossible to argue that games could be considered artistic at this point, much like the very first grainy, over-exposed films are by no means an example of the awe-inspiring beauty and complexity in which cinema would eventually achieve. Similarly the dirty, centuries-old surviving photographs are a necessary precursor to the development of photography as an art form, but by no means represent the limits of its capabilities to stir the soul. As new technology develops, so too do the art forms attached to it. Critics of games as art such as the l are often of the opinion that no game has ever achieved the intellectual status of great works of poetry, film or music and though I disagree with such a claim, I can’t help but wonder, how does the quality of a work of art diminish its status as an art form?

The Internet is rife with bloodthirsty keyboard warriors who believe it is their duty to declare that just because they can’t stand it, Justin Beiber’s songs cannot be considered music. Now believe me, I hate overcommercialised teen pop as the next guy, but like it or not Justin Beiber still falls under the realm of music. Every art form has its fair share of terrible examples; videogames are no different, however there are also truly remarkable works of gaming brilliance, capable of deeply captivating moments, rich, interesting characters and commentary on challenging social issues. Bioshock, released in 2007, created the disturbingly fascinating world of Rapture and explored themes of free will and the dangers of unregulated capitalism in a narrative that begs to be studied just as surely as classic works of dystopian fiction like Brave New World or Atlas Shrugged. What’s unique to Bioshock, and all videogames, is that there is an exclusive artistic convention only possible due to interactivity: gameplay.

Just as different musical instruments may play the same note at the same pitch but with a different sound to each other, art forms vary in their complexity (or perhaps you could say, ‘purity’). Whereas visual art exists purely between the artist and his or her canvas, film combines many art forms into one cohesive format. Elements of photography (shot selection and lighting), music (film score), drama (acting) and choreography (positioning and timing) all work together seamlessly to create an experience in which none of those art forms are individually capable. Videogames incorporate all the intricacies of cinema but with added feature of interactivity thrown into the mix. Creating entertaining gameplay requires intelligent manipulation of many technicalities such as physics and artificial intelligence. This can be considered an art form all its own. Just as architecture requires great skill in disciplines that seem unartistic (mathematics, engineering) in order to produce works of beauty, so too does do videogame creators (programming, game engine design). Like art, great ideas and innovation are required to ensure gameplay remains compelling, such as Deadspace’s signature limb dismemberment feature.

However, the interactivity that defines all videogames also poses a big problem in arguing that they should be considered artistic, making them appear to be fundamentally different from other forms of art. Whereas film or music or visual art revolves around the passive appreciation of another’s work, videogames allow users to actively engage in an immersive world. You cannot interact with a painting whilst it hangs in a gallery, or push Rose into the freezing cold Atlantic Ocean so that Jack can live while you watch Titanic. Interactivity would instantly destroy other forms of art, however utalisation of this powerful feature serves to prove just how versatile videogames have become. It’s also worth noting that interactivity doesn’t inherently imply absolute freedom. Despite what many marketing teams are so eager to claim, there is yet to be a game created (with a storyline) that allows users to do absolutely anything. In Deus Ex there were many choices as to how to approach each situation, far more than a lot games these days can match, but if wanted to, I couldn’t decide to just forget about the whole conspiracy thing and simply spend all my time walking into women’s bathrooms. Well, I suppose I could, but the story wouldn’t significantly adapt to that decision because the programmers and writers didn’t allow for it. These restrictions conform to those existing in other art forms; the brilliance of games is they make you feel like you’re creating you’re own story, whilst in reality you’re being pushed down a predetermined path. 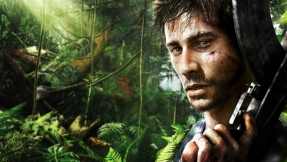 Over the last decade or so videogame narrative has grown immensely in sophistication as the average age of gamers has increased; providing a platform, through fun and exciting gameplay, to tell a thought-provoking story to those who might otherwise never read a novel or watch a film more compelling than the latest in the series of Scary Movie rip-offs. Character-driven games have emerged such as Far Cry 3 which creates a fascinating dynamic between Vaas Montenegro, an antagonist every bit as unpredictable and psychotic as The Joker from The Dark Knight, and Jason Brody, an adrenaline junky rich-kid, who undergoes Heart of Darkness style transformation in which not only does he become just as savage as the man he strives to defeat, but struggles to accept that he genuinely enjoys being the monster he’s become. This story is would be fascinating to watch, but the emotional impact is heightened by the players freedom to craft his or her own narrative by controlling Jason’s actions, further intensified by Ubisoft Montreal’s gameplay decision to never let go of the first-person perspective, even during cut scenes or when driving vehicles. This mastery of narrative is impressive, but are videogames really capable to inspiring emotion in its audience as effectively as films or music? To that end, I call upon Journey.

When it comes to Thatgamecompany’s universally acclaimed 2012 PSN title, there is little left to praise that hasn’t already been said. Intense, refined beauty is an understatement. The first time I played this game I was in a terribly toxic mood. I instantly disabled my Internet so I wouldn’t be disturbed by any unwanted guests due to Journey’s much-touted feature that seamlessly connects players with one another. I had to forget everything around me and hope this game would pull me out of the pits of frustration. Needless to say, it delivered. It delivered in a way no other art form was capable of; controlling a nameless character, tiny in comparison to the huge, sprawling world he or she was forced to occupy. It reminded me of me, and at that final moment perfect moment walking into the light, knowing my little cloth friend would no longer be alone, I wept. It was so beautiful. Skiing across the shimmering golden sand nestled inside a vast, mysterious ruin; the sun setting behind a mountain so distant and yet so absorbing I am powerless to gravitate towards it. Cascading light washing over the sand like an ocean before being cut short by each pillar only to be born again. As I was captivated by this scene of absolute majesty I couldn’t help but wonder to myself, how can anyone possible deny this games status as art?

Though they began as simple, entertaining ways to pass the time, through computer technology videogames have evolved into works of brilliant interactive storytelling, capable of exploring complex themes and illicit strong emotions in the audience through the challenges and plights of the characters. True, there are still games with simple narratives (or no narrative at all) that are created purely for fun but it cannot diminish the status of the entire medium. To what extent does Shut Up by the Black Eyed Peas examine the human condition? How exactly did Adam Sandler’s Jack and Jill touch on contemporary social issues? Really neither of these works has much to say about anything important, but they are each an example of their respective art forms just as surely as Blowing in the Wind by Bob Dylan or The Godfather. If Journey is undeniably a work of art, so too is every other videogame. Sculptors have their clay, musicians have their instruments, and videogame designers have their code.

Posted on Oct 13, 2013 by
Lachlan Vass
Yo, what's up? I'm a journo from Australia (staya) trying to expose a local ring of bogan druglords, and also write about film, TV, games, literature, arts and maybe Anime.
Follow