In a couple of weeks time Ben Wheatley’s fourth feature will be released across a variety of platforms. On the 5th of July, to be exact, A Field in England will be available to watch in cinemas, on Film 4, video streaming services and DVD. It’s a rather unusual method of release for a movie but it means that everyone will have the opportunity to watch it and hopefully it will encourage more people to do so. Comparing his three previous efforts Down Terrace (2009), Kill List (2011) and Sightseers (2012) with their most similar counterpart from Quentin Tarantino’s works, this article will look at how Wheatley’s career correlates with QT and what makes him such an interesting new talent. 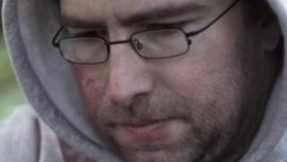 When Tarantino first emerged with Reservoir Dogs back in 1992 the film took the movie world by storm. By focussing on an element of crime often left out of cinema he managed to capture the imagination of the world over. It’s a film about a botched diamond robbery, set after the robbery. It’s made great by stunning performances, astounding dialogue and flashes of QT’s signature violence.

Down Terrace is a grittier affair, having been shot within eight days and made for a budget of only six grand, Wheatley’s resources were limited to say the least. The majority of the film takes place within the family home (you’ll remember Reservoir Dogs is almost entirely situated in a warehouse, making the first link between the two) telling the story of a crime family in Brighton. Bill (Robin Hill), the father, has just been released from prison and is eager to get revenge on the person responsible for informing the police of his crimes. The film, in many ways, has elements of kitchen-sink drama about it, spending a lot of time with the characters and seeing how this dysfunctional trio operate with each other. There’s no frills about it; exemplified by the way as every new day begins Wheatley plasters the day of the week in solid white capitals on the bottom of the screen. This is a family drama first and foremost, it just happens to be about a family with a tendency to break the law and have an over-exuberant taste for cold murder.

Looking at Down Terrace in a bit more depth it’s easier than you might think to draw comparisons to QT’s debut masterpiece. It takes an unusual angle, like Reservoir Dogs, we watch our protagonists as they recover and deal with the consequences of their actions rather than in the midst of their crimes. It shows a very real look at the after-effects of crime and the fears and feelings held by those involved. Just as Tim Roth’s Mr. Orange goes through the motions questioning what he’s done Down Terrace’s Karl (Robin Hill) wants out of his psychopath parents murderous hunt and wishes just to lead a normal life. While his parents together form a Mr. Blonde-like role, being quite happy to squash any bug of a human that might happen to get in their way. The stylistic violence is there too, albeit in a different manner, opting for short, sudden and gruesome deaths throughout. Expect shooting, suffocation and one of the greatest car run downs in movie history. We can see the same kind of thing in his other movies as it becomes his own signature much like QT’s infamous love of blood and guts. The famous ear cutting scene may not be matched but Down Terrace’s final showdown between father and son carries a similar sense of dread and threat to it. As with Reservoir Dogs, Wheatley injects his own dry sense of humour throughout the movie as well, be it a death you weren’t expecting or Bill’s meaningless existential ramblings he manges to find a great level of humour in what should be a very sombre story; no mean feat for a first-time writer-director with a hugely limited budget. Down Terrace is an impressive debut feature that deserved more recognition than it has got. 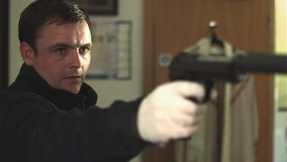 With a title as unimaginative as Kill List you will be forgiven if you have previously dismissed Wheatley’s intense hitman thriller. But you will be pleasantly surprised if you give it a watch. Following two contract killers as they accept one last job, after having shared an ambiguous horrible experience the last time they paired up, we join them as they work their way through a list of contracts aiming for one big final pay out. Things in the end turn out to be very far from what the pair had planned. With a slightly bigger budget behind him Wheatley increases the violence and action making Kill List a bloodthirsty affair and a throwback to the thrillers of old.

Like the Grindhouse series which draws its inspiration from the low-budget B movies of the seventies and eighties, Kill List harks back to the British side of gritty thrillers from the past, films like Get Carter. It’s a no nonsense, straight-to-the-point kind of film, that’s simplistic in its aims but doesn’t need to be anything more. Working through the list each victim is headed up with the same block capitals he used for the days of the week in Down Terrace, The Bride in Tarantino’s Kill Bill works her way through the members of her old organisation in the same fashion. While The Bride goes about her killings with a cool, calm revenge charging them, the pair of hitmen in Kill List show us two very different sides of the blood-splattered coin. Much like Pulp Fiction with its main partnership.

There’s a lot less humour in Kill List, so far it Wheatley’s most serious picture, but the way its pair of ruthless anti-heroes relationship works is not that far away from Samuel L. Jackson and John Travolta’s Jules and Vince. Constantly arguing with each other and trying to stop each other from losing it, there might not be an equivalent to the ‘Quarter Pounder with Cheese’ dialogue but the chemistry is there. Jay (Neil Maskell) and Gal (Michael Smiley) have a turbulent relationship, and can one minute be best mates confiding in each other, the next be wrestling on the floor, its a dynamic that’s often very difficult for directors to capture but Wheatley, working with frequent collaborator Smiley, manages to build what seems a completely realistic companionship between his two leads. He includes moments we can relate to, such as a dinner scene between both hitmen and their other halves, which builds our relationship with them making it much more emotive when the action begins to take place, it’s the same technique Tarantino uses with Jules and Vince as we grow to know and love them through their every day conversations we care more about them when one of them blows someone’s head off. 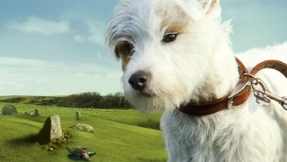 With his latest film Wheatley headed further into black comedy. Sightseers, his biggest film to date having been produced by Edgar Wright, follows Tina (Alice Lowe) and Chris (Steve Oram) on their first ever caravanning holiday together. But on their way they find themselves getting ever so slightly pissed off with their fellow tourists and develop a taste for killing them. It’s dark and gory as hell and is often described as a horror because of that, but, seeing it as a horror is definitely missing the point.

With the same premise as Natural Born Killers the couple grow closer together through the killing of others. Starting off by getting a bit arse-y with a guy on a tour bus after visiting a pencil museum the killings begin suddenly but catch on quickly, mirroring Mickey (Woody Harrelson) and Mallory’s (Juliette Lewis) descent into mass murdering vigilantes in Tarantino’s crazy love story. But Wheatley, and writers Alice Lowe and Steve Oram, have stripped the story of its preachy message and any kind of glamorous image the movie may have had and replaced it with a black sense of humour that is quintessentially British. Violence is used to a more humorous effect here than in Kill List and Down Terrace but throughout his three films it’s clear that Wheatley has developed his own way with gruesome violence that’s very distinctive. His minimalistic direction and his ability to pull great performances out of his cast show more signs of a truly great director. He’s just as at home directing a slightly heated domestic as he is someone’s skull getting caved in. Perhaps in this aspect he’s even more multi-faceted than Tarantino, a director who rarely bothers with any kind of reality in his work, instead opting for style over substance. While Wheatley’s films may be missing a moral compass there’s a bit more depth to them. Sightseers is one of the most original comedies to come out in years and it deserves the critical reception it has received. 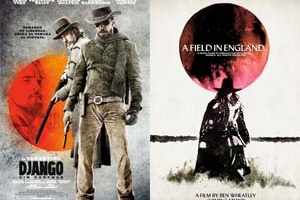 As Wheatley remains a character that is only found underneath the radar of pop culture his appeal may not be quite as large as the great QT but looking back at his films it would be hard to argue that the two don’t share a few talents and interests. And hopefully, by reading this you’ll have a reason to follow one of the most promising directors Britain has to offer at the moment. A Field in England is set to be a mind-bending period piece with elements of the abstract. Something very different from what he’s done before but could it be Wheatley’s Django? Even their posters bear a slight resemblance.

Posted on Jun 20, 2013 by
Jonny Brown
I am currently a Creative and Media Writing student at the Univerisity of Portsmouth. I'm a huge movie fan particularly of low-budget British cinema and the abstract.
Follow