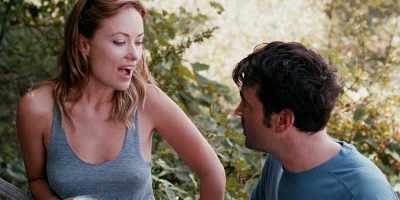 Lately, it seems as if every other film or television show is said to define a generation. Girls, for instance, speaks to the struggling twenty-somethings in New York City who came of age under George W. Bush and Facebook. Spring Breakers, on the other hand, is supposed to represent the wild and out of control youth of today who apparently listens to dubstep, drinks jungle juice, and has threesomes in pools. And then there is The Bling Ring, which uses a story of celebrity obsessed criminals to symbolize contemporary culture’s obsession with fame.

All of these films may in some way speak to Generation iPod (is that what we’re being called?), but perhaps the most accurate and achingly authentic depiction of today’s twenty-something American culture is Drinking Buddies. The film, which is written, directed, and edited by Joe Swanson and stars Olivia Wilde, Anna Kendrick, Jake Johnson, and Ron Livingston, offers insight into the lives of young adults who are old enough to live on their own (or with significant others) but not quite old enough to figure out what to do next. They have their apartments, their jobs, their friends, and even their lovers…so now what?

As the title implies, much of the film centers on the four characters as they hang out and drink with one another. A lot of the film’s success rests upon the execution of small moments that serve to reflect the reality of existence and the way humans interact. Consider, for instance, a scene early in the film in which Kate (Wilde) and her best friend Luke (Johnson) have a drink at the bar after work. The scene is small and simple, as Luke’s girlfriend Jill (Kendrick) meets up with them presumably at a later time because she was held up doing something else. The night is about to end and Luke asks Jill if she wants another drink. Jill refuses, but Luke buys one for himself. Jill appears to be okay with it, but there is a slight look in her face and a tone in her voice that Luke cannot detect which suggests that Jill understands her boyfriend’s drinking problem and is not okay with it.

These characters–and perhaps this generation–are college graduates who partied hard, studied hard, and found a way to come out unscathed on the other side. As twenty-something college graduates, they are old enough to secure paying jobs that can buy them their own apartments away from their parents, but they still hang on to the glory days of college and the freedom and liberation it gave them.

As a twenty-something New York City dweller myself, I found this film to be immensely relatable. Am I an alcoholic because I go to the bar numerous nights of the week and drink with my friends? If this was acceptable behavior in college, is it suddenly unacceptable after college? Where do we draw the line, and what separates a person who parties from a person who has a drinking problem? At one point, if ever at all, will the characters in the film go from being drinking buddies to one another’s AA sponsors?

Then there is the film’s depiction of romantic love and contemporary relationships. My generation is privileged enough to live in a world where marriage and family isn’t the number one priority anymore (I speak, of course, generally about American culture). But the advent of social media, dating apps, and the aftermath of feminism and suburban ennui has also left us flippant, indecisive, and flighty. We know that we don’t need to settle down and have children, to be sure, but we also have within us the idea that any relationship is too much of a self-sacrifice, and that monogamous love might be a thing of the past.

The characters in the film grapple with this predicament. Luke and Jill love each other but they aren’t sure if they should marry each other and settle down, even though it might be something that both of them want. Maybe they don’t know what they want–that’s part of it–but I think they don’t know what they want because they came of age with a generation who didn’t have anyone telling them what they should want. That is, parents weren’t selling the marriage shtick to us as it was sold to them, probably because our parents didn’t find marriage all that satisfying and wanted us to consider the alternative in the hope that it might be better.

And the question the film asks, I think, is whether or not the alternative, whatever it may be, is better. Is our generation who went to college and had intellectual conversations about Camus while sharing a cigarette and a drink with a stranger at a party really that much happier than our parents who didn’t necessarily go to college and instead settled down with one career and one family?

We have the freedom and liberation to do what we want, for the most part, and we aren’t bogged down by the social conservative constraints that our parents and grandparents fought. Contemporary technology keeps us connected all of the time, and it is almost impossible to “miss out” on anything when everyone we know is on Facebook or Twitter. In his book on contemporary Hollywood cinema, Tino Balio describes our generation (and by our, I mean mine, and by mine, I mean the twenty-something American college graduate) as the “I want it for free generation.” Maybe Balio is right. Maybe after all of the struggle our parents and grandparents had to face in order to give us the kind of wonderful life we have, we want to do with it whatever the hell we please. As Miley Cyrus sings in her song “We Can’t Stop,” “It’s our party we can do what we want.”

Drinking Buddies acknowledges this, and ultimately questions whether or not too much freedom is just as stifling as none at all.

Posted on Sep 2, 2013 by
Jon Lisi
Jon Lisi is a PhD student who writes about film, television, and popular culture. You can follow his work here: http://jonlisi.pressfolios.com/.
Follow