It seems like a lost cause to educate young people in drama these days with the accessibility of TV shows and movies. Is it no longer worthwhile to try and engage our young people in drama, such as children, teenagers and young adults, simply because the modern world rarely operates off-screen? Are plays as a form of entertainment, and play-writing as a form of literature, meaningful investments for the people of tomorrow? Do the outcomes enact positive change for the world of tomorrow? In a screen-driven society, it seems that drama is represented by things like merely one single high-school musical in the lives of most young people, leaving its various possibilities unexplored.

There are many economical and artistic advantages of drama, however, particularly in contrast to film-making. Drama offers its audiences and actors the added benefit of the live experience, renowned and respected for its raw, real art form. The art form of live performance theatre offers various benefits to all of those involved and provides those transferable skills and qualities we can all benefit from as a society. As a result, we should be educating our young people in the elements of drama, regardless of what sector they choose to work in later on down the road.

The Benefits of Drama to the Performer 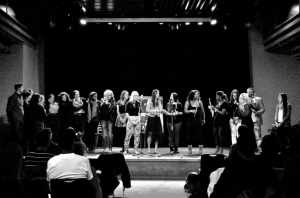 It is important to educate young people in drama in our schools because it can enable them to grow with their peers. With interactions taking place in the classroom and outside of the home, where most on-screen works are seen, students are engaging in a more social experience in schools that allows them to grow in a healthy, diverse way. That is not to say that the content or quality on-screen cannot educate our young people in positive ways. Rather, it is an entirely different ball-game to be alone in one’s living room or bedroom and than it is to be in front of a large crowd.

The benefits of drama to students starts with one of the most difficult qualities to foster in young people, self-confidence. It can take years for us as humans to build up enough momentum to be comfortable sharing our thoughts with others, but it becomes a necessary tactic to success later on in life regardless of the industry you’re in. You have to interact with others, and you need to be confident in what you are saying and doing so that other people will trust and respect you.

Another benefit to the performer is that you will learn to know yourself. Through movement and language, singing, talking, walking and dancing, you learn about who you are as a person because of how you express yourself. Knowing who you are is an effective way of guiding yourself through life wisely because you will know what you want and how you operate, and necessary to foster from a young age. On top of that, it is a great way to educate children how to speak and read, from the basic forms up to the most creative and didactic.

With the ability to communicate soundly and wisely, our young people can lead successfully in their future roles of society because they will be able to forge effective relationships, produce high-quality innovations, and manage difficult situations with developed problem-solving skills. Not only does drama educate one in how to read, speak, and act, but it also has added benefits such as critical thinking skills and creative outside-of-the-box perspectives from the content one is learning.

Moreover, the content of plays is important to teach in both performance theatre courses as well as literary English classes because of its dualism of rewards. Beyond the basic abilities of being literate, one learns about a variety of literary devices and components that go into creating the narratives that hold our gaze in all forms of texts, whether it be TV, video games, books or magazines. Understanding these underlying pieces through both acting and dissecting will lead to a full understanding of other encountered narratives in future, the primary form of representation we have in our world.

The Benefits of Drama for the Audience 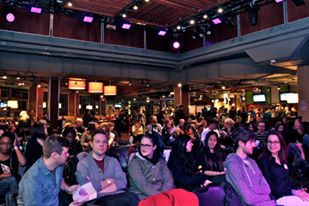 For the audience, the clear benefit of live performance over on-screen film and TV shows is the experience of connection it offers. You can watch performers in their raw form, from start to finish. It seems much more entertaining to watch real people in front of us as opposed to a flat screen because we feel a connection to the performers in front of us on stage, making them appear as characters no longer. Interestingly, this is also a benefit to the performers because they get to experience their work live as well. In a film, it takes much longer than 120 minutes to take and re-take scenes, whereas a drama performance has to be done in one go, heightening the value of the experience because of its skill level.

Drama Education in the Modern World

With the onslaught of film and TV productions in the rise of the digital age, it seems that live theatre is no longer valuable to teach when juxtaposed to on-screen works. What does drama education look like in the modern world?

In my City, there are programs we have in place to allow local artists to be paired up with elementary school classes for several weeks with high-intensity arts programming in which students learn how to approach other subjects through art. In particular, drama is used to teach children about culture and history, such as the Museum School program where students are taken out of the classroom for the activities. With the intention of bringing the education process full circle from the classroom, the City also offers an artist in residence program where artists join students in the classroom to compliment the in-field exposure of Museum School.

There are, of course, other forms of drama in the modern world, in both performance and literary education, but the accessibility of these programs is low. It is critical that we continue to educate and engage our young people in multiple art forms, particularly drama as a form of live, personal expression. Although the modern age has made many things such as art seem like part of a dying age, it is important to keep them in our schools, spaces, and workplaces to continue making life meaningful. Art is the fuel of life that allows us to feel alive because of its enriching qualities, so do not keep calm, and please do be dramatic. 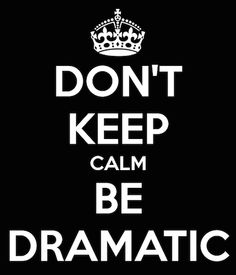