Four of the Best Literary Feasts

Finding one specific reason as to why books are loved is a fairly feckless task; for some it’s a novel’s concentration of plot, whereas others are captured by an intense plot twist. Dramatic denouements have some readers coming back for more while certain booklovers think opulent descriptions are a must. Personally, I don’t have to forage very far for the one feature of literature that satisfies me more than most. The presence of food – be it used as a vehicle to develop a character or employed to enhance my sensory understanding of the text – has fascinated me for years. Thinking about it, I struggle to remember truly enjoying a book that hasn’t in some small way found descriptive solace through food.

Food surrounds and defines our daily lives and as such, it comes as no surprise that some of our best loved characters are blessed with the opportunity to fill their bellies with wonderfully evocative ingredients; think of Enid Blyton’s famous five and their prodigious eating capabilities. Or of the smells and textures of madeleines that perfume Marcel Proust’s In Search of Lost Time; the intense green hue that emanates from Dr. Seuss’ Green Eggs and Ham and the salinity of Ernest Hemingway’s oysters in A Moveable Feast fill their pages with gastronomic delight.

Try and read a novel written by Roald Dahl that doesn’t mention food; he was obsessed by feeding his characters. James and the Giant Peach and Charlie and the Chocolate Factory are the most instantly recognisable, while Matilda contains perhaps the greatest act of food rebellion in children’s literature; Bruce Bogtrotter’s successful battle with the world’s largest chocolate cake.

Entire novels have been devoted to the relentless pursuit of the ultimate evocation of food; Gabrielle Hamilton pours her heart into Blood, Bones and Butter while Alice B. Tolkas’s cookbook is as much a guide to life that uses food as its inspiration at every turn.

I’ve attempted – though no doubt with only a small degree of success – to select just four of my favourite pieces of literature that in are in some way augmented by their use of food. 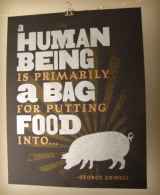 George Orwell’s Down and Out in Paris and London recounts his struggles with penury and, subsequently, there is a resolute focus on the issues of food that are inextricably linked to poverty; the incessant bouts of bread and butter surrounded by vultures and of the ignominy of shopping with little money. What makes Down and Out particularly poignant is the fact that Orwell doubtlessly appreciated good food. His 1945 essay entitled In Defence of English Cooking lauds the merits of English cuisine and yet, the most memorable food scene in Down and Out arrives in the grim kitchens of Paris, bringing with it the fear that stubbornly refuses to depart from our consciences: what really happens behind the kitchen door.

Of course, kitchen wives’ tales are boundless and often untrue but yet, Orwell’s illustration of a chef who picks up meat ‘in his fingers and slaps it down, runs his thumb along the dish and licks it to taste gravy’ is decidedly accurate. I have fond memories of Marco Pierre White acting with diligence in front of television cameras, uncomfortably swapping spoons every time he readjusted a dish’s seasoning. Indeed, I’ve been in kitchens where food has been flung from corner to corner and sauces have been tasted by finger to finger.

This lucid anecdote in Orwell’s memoir is one of many that are relatable to modern society, in spite of nearly a century’s time difference. 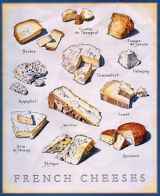 If this article inspires you to read just one of these books, make it Émile Zola’s Le Ventre de Paris (directly translated as The Belly of Paris). Amid a warts-and-all representation of socialist uprisings, Zola forms a Parisian landscape that is overflowing with a riot of incongruent food sketches. Its inhabitants sleep and fornicate on cabbage patches and its market inspectors frequently encounter fish guts. Conversely, there are plenty of moments that depict gastronomic beauty. Charcuteries gleam with the deep, paprika-red hue of hanging hams. Zola slowly layers Parmesans on top of Gruyeres in a wonderful paragraph that climaxes with the intense pong of Camembert to give the novel a redolent whiff of the cheeses that are so associable with France. The Belly of Paris is a novel that captures everything about the city’s food scene in a way that almost lets you taste the food; almost.

If you’re after a novel which is blessed with a thrilling narrative, The Belly of Paris probably isn’t what you’re looking for. Though its central protagonist, Florent, imprisoned during the French coup d’état of 1851, is a curious man whose life is fraught with moral and political dilemmas, the novel’s real strength comes through its anthropological take on society as defined by its food. A perfect novel to read if you’re about to travel to France, or if you’re in the mood to get your saliva flowing. 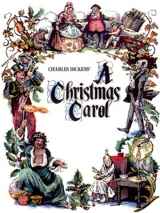 Forget every abhorrent expletive you’ve ever said about the world’s favourite bird; less a gastronomic delight but more a traditional protocol, the turkey has been greeting festive dining tables for centuries (it supposedly became the British centrepiece in the 16th Century). The bird’s prandial importance certainly wasn’t lost on Charles Dickens, whose loathsome character Ebeneezer Scrooge in A Christmas Carol uses the turkey to signal his transformation from dogged avoider of Christmas traditions to a man who embraced their warm charms with open arms. As the line goes, ‘it was even said of him that he knew how to keep Christmas well’.

Sure, every Christmas table is improved by the omission of turkey, but its dry flesh does seem to have a hold over us. That many of us persist with it each year emphasises its importance to A Christmas Carol. Scrooge’s grand gesture was made in the spirit of Christmas and for that, Dickens’ novel should be treasured by every lover of Christmas food.

One of the great mysteries of Harry Potter (for there are many) is just how so few of the characters are described as being overweight. Nearly every food seems to be laden with fat or sugar; chocolate frogs are the first snack that greets Harry on his first journey to Hogwarts. There must be some sort of clandestine fitness class within Hogwarts; that or they all have tremendous self-restraint.

Sustenance comes in all forms; pumpkin pasties, Mrs. Weasley’s innumerable sausages and any number of sinful sweets. Then there are all the tarts, puddings and Peppermint Imps. To wash these down, butterbeer, a drink that promises all kinds of salacious beauty; I used to dream how sweet its froth was, with J.K. Rowling’s admission that it tastes ‘a little bit like less sickly butterscotch’ only cementing my image of it as the most ambrosial beverage in literature.

And I suppose that’s exactly why I love the food and drink in Harry Potter. Rowling’s characters are privy to the kind of diet that we invariably deny ourselves. She manages to capture our palates’ greatest desires and cravings for sweet and savoury food without making the references too far removed from our daily comestibles. Though there are occasional caveats (Berti Bott’s Every Flavour Bean and butterbeer, for instance), the wizards and witches enjoy much of the same food as we do. Rowling successfully makes the gastronomy of her subterranean magical world accessible and a joy to read.

Thought of any glaring omissions? I’d love to hear of your most treasured memories of food in books, and maybe even discuss a literature-inspired recipe or two!

Posted on Aug 7, 2013 by
Joe Russell
English Literature graduate often attracted to the presence of gastronomy in literature, film and television.
Follow