Gojira (1954) Review: The Darker Side of Godzilla

The word “Kaiju” means giant monster and it is a word used to describe or refer to movies from Japan that feature huge and devastating monsters like Gamera, King Ghidorah, Rodan and most famously, Godzilla. Since his introduction in 1954, Godzilla, from Toho Studios has become a household name and is one of the most recognizable monsters along with Dracula, Frankenstein and King Kong.  With over 20 films spanning 50 years, Godzilla is a Japanese National Treasure and loved by millions across the world. Despite each decade having a different “feel” and look for Godzilla (believe me, he has gone through numerous makeovers), fans enjoy most of the films for the cheesy plots, minuature sets, funky looking monsters and badly dubbed voice overs. They each have an apparent charm and for those who are uninitiated tey may come across as disposable and corny creature features. Godzilla never started out tongue in cheek and corny. It began with the most serious of intentions and that was to provoke thought and provide a perspective of modern history regarding man and his struggle to best mother nature.  – “Here be Monsters!” 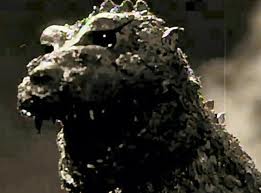 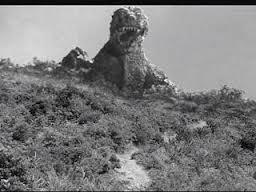 I’d like to make this clear. The original 1954 Black and White, Japanese version of Gojira is much, much more than just  a dude in a cheap rubber dinosaur suit stomping on plastic and wooden models of Tokyo. Gojira is actually one of the most significant and timeless cautionary tales of the Atomic Age. Once again, scientists wander extremely close into the domain of the creator with the comfortable assumption they can do no wrong. Things of course do go wrong and it turns out very ugly.

Gojira, loosely translated into “Godzilla”, is full of deep metaphor and obvious subtext. The monster is a large, destructive, and irradiated dinosaur that awakens to exist for the sole purpose of destroying mankind with his formidable radioactive breath and big feet. The re-edited and re-mastered original Japanese Version  excises much of the newer shot Raymond Burr footage in the most common American Version that is really just rigid, annoying and useless. The film is less campy, schlocky and Americanized with these scenes cut out. What we have is a powerful, emotional and noirish masterpiece. The film is beautifully photographed by Masao Tamai and there are incredible  lingering pans of fiery devastation and complete suffering. The Japanese see Gojira as a force of nature to be accepted if not reckoned with. At times the movie even takes on an avant garde air. Akira Ifukube’s eerie music is hauntingly reflective and appropriate. There is one particluar scene that is so well done it can bring a tear to your eye. It takes place the day after Gojira’s first attack and the country is mourning. There is a beautiful shot of Japanese children singing in a large temple and the camera pans the destruction. Director Ishiro Honda lets the scene play out slowly and emotionally with profound results. 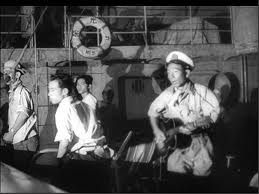 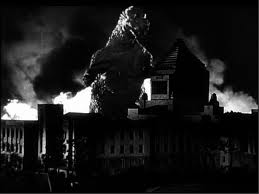 I also would like to mention the strengths of the effects and the acting by the versatile Akihiko Hirata as the conflicted Professor Serizawa who in the end will eventually make a great sacrifice to save Japan and the world from the Atomic Age monstrosity. Every heavy footstep of Gojira sounds like a bomb going off and at times the film (with it’s obvious metaphorical innards) may be accused of exploiting the still fresh pain of Japan’s role in WWII, but is still a very astute and significant piece of film noir. In this incarnation of Godzilla he does not battle other monstrous foes or teams up with flying reptiles in order to save mankind from aliens. Here, Gojira is destruction incarnate. We battle him and vice versa. Eventually mankind must own up to creating Gojira but will we ever learn our lesson? Watch it late at night with some buttered popcorn and enjoy! Don’t forget to catch the Japanese uncut version on DVD and Blu Ray. Followed by “Godzilla Raids Again” or in the US – “Gigantis – The Fire Monster”

Posted on Nov 12, 2012 by
User V. Guest
Contributing writer for The Artifice.
Follow