Gravity Review: Shooting for the Stars

Throughout the past century, Hollywood has depicted space in vastly different and extraordinarily creative ways. Whether it has been the playground of alien invaders e.g. action-blockbusters like Independence Day, a place where “no one can hear you scream”, or the perfect place to look for philosophical awakenings, the universe is seen as an unexplored and dense labyrinth. Big-name directors have yearned to discover everything about our galaxy and beyond. Thankfully, Mexican writer/director extraordinaire Alfonso Cuaron (Harry Potter and the Prisoner of Azkaban, Children of Men) has come along to show us how it’s done. His new sci-fi thriller is a revelatory mix of drama, thrills, and ingenious imagery.

Gravity will engage every audience member’s sense, brain cell, and DNA strand. From go to woe, the movie sucks you into this harrowing tale and refuses to let go. This may seem terrifying given the confronting premise, but its majesty allows you absorb every fascinating detail within each inventive frame. The story is the very definition of ‘simple yet effective’. We are immediately introduced to the vast landscape of Earth and NASA space shuttle Explorer (appropriate name). Its crew, led by veteran astronaut Matt Kowalski (George Clooney), have embraced the vastness and immense beauty of their temporary home. On a fundamental and seemingly enjoyable spacewalk to undertake vital engineering duties, satellite debris collides into the shuttle. The Explorer is spectacularly destroyed and every crew member, except for Kowalski and nervous medical engineer Dr. Ryan Stone (Sandra Bullock), is horrifyingly eviscerated. After the disastrous event, Stone and Kowalski realise that a much larger spacewalk is the only way to guarantee their safety. With only a tether connecting the two opposing personalities whilst preventing them from certain doom, the ambitious and dangerous plan could forever change their lives.

Cuaron’s attention to detail and bravely original film-making style must have been written in the stars during a vital part of his life. This year, visionary foreign directors including Guilermo del Toro, Park Chan-wook, and Neill Blompkamp have delivered cinematic visions worth discussing. Cuaron’s latest effort, ironically, eclipses all of them. He has certainly come a long way from making road-trip movies featuring scintillating threesomes (Y Tu Mama Tambien). Since the dawn of time, illustrated in 2001: A Space Odyssey‘s iconic opening sequence, man has longingly looked up to the stars for inspiration. Here, Cuaron displays a version of space that is light-years beyond my craziest dreams. Within the past 50 years, major countries have placed billions into risky yet revelatory space missions. Gravity, deftly touching on the feud between world superpowers, tips it cap to the importance of humanity, courage, and scientific breakthroughs. The harsh imagery scattered throughout this sci-fi thriller touches on such tragedies as 1986s’ Challenger and 2003’s Columbia shuttle explosions. Despite this, there is no jingoism or condescension to be found in this movie’s universe. Co-written by Cuaron and his son Jonas, this story has clearly come from a sensitive and profound place in their hearts. The movie’s emotional force pushes this haunting story along as the clock ticks down. Thanks to Cuaron’s unique touches, this roller-coaster ride sends the plucky characters and audiences into an emotional tailspin.

This glowing cinematic experience is boosted by Cuaron’s miraculous and breath-taking visual style. This cinematic opus proves two things: that foreign directors can bring an inventive touch to big-budget material, and less really is more. Here, we essentially see Earth as a big, blue marble. We are unsure of what is happening on it, but we are able to soak in its majestic nature and jaw-dropping landscapes. Whereas Cuaron depicts Earth as a dystopian wasteland in Children of Men, Gravity presents a healthy, sumptuous, and organic version of our planet. The third rock from the sun is awash in expansive and lush landscapes, conquering cloud cover, and magnificent oceanic vistas. Cuaron ably did his research – appropriately capturing Earth’s remarkable yet punishing relationship with the solar system. In certain shots, the Earth hurriedly switches form day to night and captures the narrative’s ever-changing mood. But Gravity‘s greatest achievement is in its many spacewalk sequences. Cuaron’s meticulousness and honest direction captures a realistic depiction of the universe’s most enthralling and dangerous intricacies. Known for extended takes and kinetic action set-pieces, Gravity proves that Cuaron is currently one of Hollywood’s greatest blockbuster directors. Here, the characters and conflict are aptly introduced in a fascinating 13 minute opening shot. The camera ducks, dives, and weaves through and around each space station. In a place where nothing goes according to plan, the nail-biting camerawork captures a first person perspective unlike any other. This is truly affecting and visceral film-making! 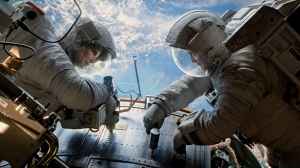 Though the glorious cinematography stands out in this nerve-wracking narrative, the soundtrack also establishes the harshness of the movie’s starry abyss. Throughout each set-piece, the thundering soundtrack roars as each explosion and wreck is appropriately muted. The acute ringing sound effects place the audience into the thick of the action. This unique trick delivers what the opening titles promise – a space setting in which loneliness and heartache are the least of these characters’ problems. In each entertaining and vertigo-inducing set-piece, the tension quickly rises when the characters reach but can’t achieve a successful grasp. Characters, objects, and debris fly towards the screen at high-speed. This IMAX-like trip into our galaxy will make everyone flinch! Each surface acts as either a lifeline or cruel trap for our unlikely heroes to crash into. Each movement, by the floating characters and objects, is well-crafted and depicts a realistic idea of space travel. Every surface, object, and inch of space is masterfully rendered and etched into each frame. The special effects are tangible, powerful, and multilayered, and the movie’s setting is a pristine and crisp example of modern film-making technology’s profound potential. Each appealing scenic vista will send you sky high, leaving only the credits to bring you safely back down to Earth. Cuaron’s purposeful and efficient direction delivers edge-of-your-seat thrills, and a truly engaging and epic sense of scale.

Remember that Simpsons episode in which Homer and Barney are sent into space? Gravity is eerily similar to that piece of animated gold. Here, Cuaron sticks to the basics. Gravity continually reminds you that many big-budget movies only serve to briefly entertain. Thankfully, he determinedly strives to deliver one entertaining and though-provoking thriller after another. Unlike many of 2013’s popcorn-chomping, explosion-filled blockbusters, Gravity doesn’t rely on cliches, emotional manipulation, stupefying exposition, or chaotic action set-pieces to tell its story. Like Children of Men, Gravity‘s influences are noticeable and yet it never seems overly derivative of any particular sci-fi classic (take that, Oblivion!). Influenced by space-set dramas including The Right Stuff and Apollo 13 (paid homage to via Ed Harris’ inclusion), Gravity, thankfully, avoids Sunshine‘s convoluted story-telling and Armageddon‘s schmaltz. Like such bottle films as 127 Hours and Life of Pi, this man-against-the-odds story focuses on the characters and the major life steps that led them into their pressing situation. The archetypal characters, despite relying entirely on two A-list actors’ strengths, are commendable people. Their yin/yang friendship and dynamic chemistry, established in just a few brief dialogue moments, define the movie’s emotional strength and intelligence. It’s brave of Clooney to take a supporting role in a sci-fi thriller of this magnitude. The prolific actor/director casts aside his stigma to deliver a poignant turn. Clooney and Cuaron understand that Bullock is the movie’s driving force. Placed in several nerve-wracking situations, the heartbroken and cynical Stone performs admirably. Undertaking an array of emotionally challenging and claustrophobic moments, Bullock provides a career-best performance for this pulsating blockbuster.

Inception, District 9, Avatar, Gravity – These sci-fi blockbusters stop people dead in their tracks. They contain emotional, visual and narratorial aspects that captivate mass audiences and stick to their guns. Gravity is a flawless and mind-blowing sci-fi thriller unafraid to be different. Its wondrous visuals, Cuaron’s commanding direction, and chilling climax draws you into this movie’s captivating narrative. This sensory feast will make you live and breathe by modern cinema’s perplexing guidelines. This is out of this world entertainment!