Iron Man 3 is coming: are you ready?

So there is this little unassuming art film coming out in May, maybe you have heard of it? Iron Man 3 is the first film in the second Marvel movie cycle and, as the two IM films before it, stars Robert Downey Jr and Gwyneth Paltrow. Along for the ride again is Don Cheadle as James Rhodes and Ben Kingsley is joining as this film’s main villain, The Mandarin.

It seems like only yesterday that fans everywhere were terrified of what the first of these films might bring. Iron Man was going to be the first film that Marvel had any real control over but the choice of director and lead actor bothered a lot of fans. It seems odd to think of it, but there are younger fans that may not really remember Downey’s addiction issues (it HAS been well over a decade now, making the younger teen fans of the films unlikely to remember it). I recall thinking at the time that the actor’s past might inform aspects of his performance of the character Tony Stark and give him real depth. As it turns out, Stark’s personal issues have been downplayed in the films so far and his self-destructive behavior shown mostly as charming irresponsibility and dislike of authority. In the comics, Tony Stark has never been very far from his demons. Perhaps in Iron Man 3 we will get to see more of Tony’s dark side.

Iron Man first appeared in 1963 Tales of Suspense #39 on the cover as a tin can with a face and a not-so-interesting tag line of “He Lives! He Walks! He Conquers!” (ah Stan Lee you silly genius you). The character was a hit more or less from the start. Surprisingly the original origin story, updated a bit for our modern era, was very faithfully translated into the film though Tony’s struggle with alcohol has definitely been downplayed quite a bit.

Demon in a Bottle 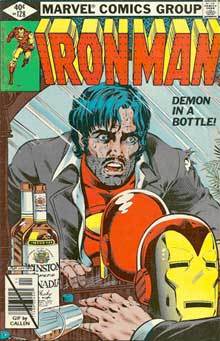 For the most part, the early Iron Man story arcs were pretty light, focusing more on the action than the story, though there was mentions of Vietnam, Communism and later the Cold War and arms proliferation. The first issue that dealt with a major real-world story in any meaningful way was the Demon in a Bottle arc that ran in Iron Man issues 120-128 in 1979. With this story, Tony’s dark side is exposed and explored. While the eventual solution is a bit too neat to be realistic, subsequent story-lines have touched on the continuing issues Stark’s drinking causes. Tony never really gets over or past the problem as it is present in many stories, depending on the writer on the book, but sometimes differing in the way it is handled. Personally I think Tony should be like any other alcoholic; they are never really ‘cured’, just always recovering. While some of the books writers have touched on Tony’s drinking problem, it has never been addressed as a major plot point rather it is more of a plot hammer to remind the reader that Marvel characters are flawed people. The alcoholism never gives Tony real depth but rather serves to add drama or conflict between Tony and other characters.

The 1980s were a less than spectacular time for Iron Man. The solo book was not selling very well and the character became all about the armor. Unfortunately, there was a LOT of different armor. While the series was in the hands of capable creators, many of the stories don’t hold up today or have been negated by more recent story arcs. 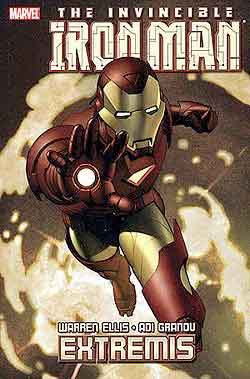 It was not until Warren Ellis wrote the Extremis storyline that Iron Man started to be interesting again. There have been some small hints that the concepts behind Extremis may be touched on in the new film. I certainly hope so since the tech in Iron Man’s adventures has always been a problem for me. The basic premise is so flawed (if they can create tech this advanced, I’m willing to bet that they could take care of the injury to his heart) that it has always been a little hard for me to relax and enjoy the stories. While the movies so far have striven for more realism the comics missed the mark for many years. Keeping his armor in a suitcase in the old days was kind of stupid but at least the movies made that work better. Then later the armor was shown as so complex that Tony need a support staff to use it.

In the 2000’s an effort was made to make the guy in the suit more interesting and create more conflict. This was achieved by introducing political plots and moving away from standard super-hero fare. Tony became the US Secretary of Defense at one point and later was the head of S.H.I.E.L.D. Unfortunately, none of that helped much.

I have always felt that in the comics at least, Iron Man is more interesting in a group dynamic. Like Captain America in The Avengers, Iron Man is best shown interacting with others to show his deeper character points. As a founding member of the team in the first issue of The Avengers, Tony is at his best shown dealing with his allies, rather than fighting his enemies. In the Avengers: Disassembled story, Stark was again at odds with his fellow Avengers and was every bit as much victim as hero. Unlike some, I was OK with the story since I had no problem with gutting the Avengers like a fish. Unfortunately, instead of starting over with something fresh, they just sewed the same old fish back together and gave them a new headquarters and more characters. (Sorry kids, I will never go along with Spider-Man in the Avengers. UCK!)

A new Iron Man for a new era 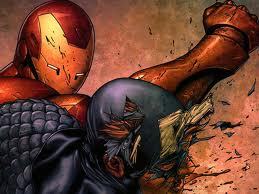 With the Civil War story in 2007, Marvel was finally able to bring Iron Man into the modern age and tell truly modern stories. With other marquee characters like Spider-Man or Captain America, the turning point into the modern era began with 9-11. These and other ‘street level’ characters could approach the material and subject matter believably and from a realistic/respectful point of view. Iron Man could not really be utilized in that setting since he just was not grounded enough. His style of story did not lend itself to something that serious. In Civil War, Iron Man could be used to represent the government system very believably. Despite some periods where he was anti-government (usually because the government was being the ‘bad guy/plot hammer’ rather than due to any sort of ideological stand), Tony Stark is generally very much in the mainstream and part of the overall system. He has problems with it but will always be a part of it so that he can ‘keep an eye’ on things.

Civil War was a statement on government power and the use of that power to control. The government side, led by Iron Man, wanted to register and control the super heroes since they view them as dangerous. The other side, as lead by Captain America, was against the government because they didn’t feel that was right and felt the registration was a violation of their rights and privacy. The villain of the story was subjective and somewhat ambiguous depending on the readers’ political and moral stance. If the reader was in favor of more government and controls on the world (used here as a metaphor for fewer civil liberties like women’s and gay rights in some ways), they tended to agree with Tony’s side. If the reader had a more hands off ideal of the government (with a desire to see more civil liberties in our society), they might feel sympathy for Cap and his side. I’m simplifying here what was a surprisingly complex premise for Marvel, but the lines were drawn and Iron Man became something of a tool for ‘THE MAN’ at this point. Surprisingly, it worked. It fit the character and the time for Stark to be a part of the machine, even if he saw his goal was to reform it.

The movies and moving forward 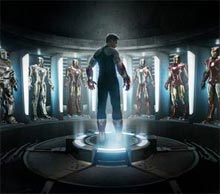 It is unfortunate that Iron Man has not had the kind of exposure that the other Marvel characters have had. Anyone that had any exposure to the character outside of the comics saw the character from a few animation appearances of mixed quality. It was however, this lack of exposure to the general public that seemed to help the first movie. Tony Stark and the Iron Man character came as quite a surprise to both fans and movie-goers. The first film was much better than the comic fans had hoped and brought in large numbers of movie-goers that were not necessarily familiar with the concept. Given the care that has been taken with translating Iron Man to the films, Iron Man 3 will have a lot of expectations by the time it is released to U.S. theaters on May 3rd.

One of the fans’ concerns for the film is the fact that Jon Favreau is not directing this time. Instead, Shane Black (Kiss Kiss, Bang Bang) will be in the director’s chair. There is a great deal of ambivalence in the fan community given Black’s track record. He is a capable director and handles action well but many are afraid his take on the character may not suit the franchise or the fans preconceived ideas. Another issue may be ‘franchise fatigue’. It is possible that the movie will fail simply because people are getting tired of Iron Man or just want to move to the next Avengers film. Certainly the only one of the next Marvel cycle other than The Avengers 2 that any of the fans are genuinely excited about seems to be Guardians of the Galaxy (possible Ant-Man too but it’s connection to the second cycle is unclear), and we may find audiences less excited to see the middle films.

I would like to see the Marvel movies maintain the quality they have had so far as they have been outstanding, but the jaded fan in me is scared that Iron Man 3 will be the first mediocre film that kicks off several mediocre films while we all wait for Avengers 2.

Posted on Apr 13, 2013 by
Taylor Ramsey
While I quietly wait for a really good excuse to go on an interstate mayhem spree, I read comics and watch movies. While I do the "writing" here, my wife makes it readable.
Follow