For a while there, it seemed like this film wasn’t going to happen. Whilst the first film made a modest profit at the worldwide box office, it wasn’t quite the money-spinner the studios may have hoped for. With an ever so slightly reduced budget, the show is finally on the road and, despite a few hiccups; the wait is seemingly worth it. 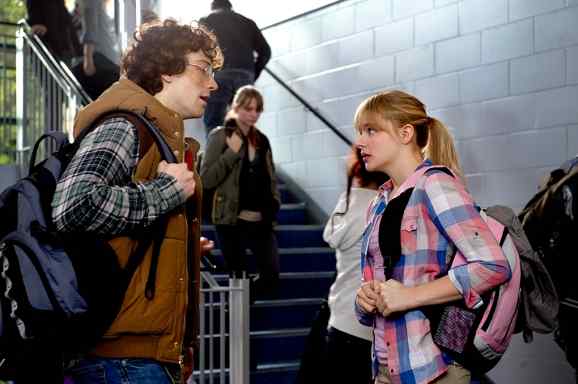 Kick-Ass 2 wastes no time in getting to the point. It opens with a rushed run through the important points the film’s predecessor, and this move would typically seem lazy and pandering, but here it feels necessary. Kick-Ass 2 makes its intentions clear from the start, and it picks up easily where Kick-Ass left off – taking the emotional beats through the sequel and continuing the tight and easy character development along an arc that begs for a resolution beyond what is offered here. Mindy Macready/Hit-Girl (a reliably committed Chloe Moretz) is now in the care of her father’s best friend Detective Williams (Morris Chestnut) and ready to start high school. Being the non-standard kid that she is, Mindy struggles with her new environment. Dave Lizewski/Kick-Ass (a bulked-up Aaron Taylor-Johnson) is also struggling to adjust, and he needs Mindy’s help. Cue a very funny training montage that includes a little girl getting locked in an arm bar and a wince-worthy nutshot. Christopher Mintz-Plasse reprises his role as Chris D’Amico, with his alter ego now being the deliciously Freudian “The Motherfucker” (wait for the beads – you’ll see what I mean). Half-an-hour in, it seems like business as usual, which feels like a relief, but actually raises a worry that Kick-Ass 2 may be content resting on its laurels. Luckily, there is a group of misfits intent on making sure that we don’t get too comfortable.

The introduction of her0/vigilante troupe Justice Forever is inspired. Although motives could have done with being fleshed out a little more, there are some affecting stories that add further credibility to the film’s serious side (more on that later). Jim Carrey does some of his most memorable work as Colonel Stars and Stripes, and Donald Faison’s boundless enthusiasm looks good on Dr Gravity. On the other side of the coin, The Motherfucker gathers his own gang of toughs, including the brutally brilliant Mother Russia, who doles out the majority of the film’s best beatings. Inevitably, the two groups collide, and when they do its one of the best potions of any movie you’re likely to see this year. The acting is uniformly solid, and the supporting cast manages to leave enough of an impression despite certain members having fairly limited screen time. Moretz seems perfectly settled in both her roles, and continues to impress with the kind of face that manages to convincingly portray intense inner-turmoil. It’s a role that will remain her signature well in to what will no doubt be a long and healthy career. Carrey almost steals the show with his tough-as-nails performance, but the even the rubber-faced one would struggle to match the impressive presence of Moretz. Most strikingly, everyone seems to be enjoying themselves. There’s a hint of unbridled glee in the eyes of every cast member, and that’s something that you can’t fake.

There are some missteps however. A couple of musical choices jar badly with the spirit of the film, particularly the use of boy band Union J to provoke a somewhat creepy sexual awakening in Mindy. Even as a device for fun, it feels like giving Union J far too much air time. It also seems to add a little too much conflict to Mindy’s character; would she really be so attracted to a bunch of boys she could quite easily annihilate? Maybe it’s just me, but that scene in particular was bothersome. The director switch is also noticeable, for both good and bad reasons. Jeff Wadlow does a good enough job of allowing the film plenty of room to breathe, but at times the tone fluctuates so much that it’s hard to get a handle on certain situations. You feel that The Motherfucker could have been a more effective character if handled a little differently. Mintz-Plasse shows some convincing malice at times, but it is often undercut by humour which, whilst funny, is a detriment to a character that has so much potential. I’m not saying ditch the jokes altogether, but at least give the guy a chance sink his teeth into the dramatic sections before the next dick joke.

Sometimes, the uneven tone works in the film’s favour. Kick-Ass 2 is full of surprises and, just like the previous instalment, it has a mean streak a mile wide. This may veer into minor spoiler territory, but try not to get too attached to the characters. As with Nic Cage’s Big Daddy before now, no character is safe from the sword, and you can bet on some genuinely cruel violence. Ah, yes…the violence. As you’d expect, it’s handled in a comic manner, but there’s no denying that it revels in excess. Chances are you will have seen more violent films, but it’s rare to see so much fun had with it. I think it’s a good sign when you can laugh at the majority of the bloody battles, and scenarios with seriously high stakes are often punctuated with little reminders that you’re meant to be enjoying yourself. This is literally the case with Colonel Stars and Stripes order of “try to have fun” to the other members of Justice Forever just before they try to break up a prostitution operation.

I left the cinema feeling both relieved and excited. There’s plenty to love about the film. It’s gratuitous in so many ways that it’s hard not to admire how self-assured it is. From the willingness to lean on young leads, to the lack of fear shown in exploring Watchmen-like themes of identity and mental stability, there’s a level of child-like excitement that infects the film as a whole. With nods and references aplenty to genre’s canon, Kick-Ass 2 certainly has lofty ambitions, and although it doesn’t quite justify itself amongst the company it tries to keep, it has an awful lot of fun trying. Even though it doesn’t quite match the superior Kick-Ass, fans should be satisfied with a brave and uncompromising sequel, and I for one would welcome a closing chapter with open arms. (Note – stay past the end credits for something that could prove relevant to a possible third film).

Posted on Aug 17, 2013 by
David Tatlow
You can call me Tatt. I like all kinds of films, as well as talking to/boring people about them at great length, so brace yourself.
Follow