With the first Sunday in advent right around the corner, it’s Christmas time once again. The best time of the year, some people say. Artistically speaking, Christmas is a complicated time. While most of us pretend to be annoyed hearing “Last Christmas” on full blast each time we go to the supermarket, we might find ourselves whistling the well-known tune in secret every now and then. Of course, it’s a different issue with literature, when on Christmas Eve, we recall so dearly how our mother used to read aloud for us when we were younger, “It was the night before Christmas…” echoing in our heads.

Lastly, there is the well-known bone of contention called Christmas movies. Not later than when the TV starts showing Christmas rom-coms and family movies, our population will split into two camps: there’s team Christmas, and there’s team anti-Christmas. Team anti-Christmas will try to avoid supermarkets, prime time on television and any other possible encounter with the colourful, kitschy side of our culture. Perhaps, they sense the presence of this side in themselves, but for some reason don’t want to surrender to it – and how could we blame them? However, there are those who can’t resist. Whether it’s Justin Bieber’s horrible Christmas hit (which he is sure to be having) or the hundredth transmission of Elf and How the Grinch Stole Christmas – we need this. We push away the devil of criticism from our shoulders and embrace the angel of mainstream.

How wonderful is it then, when a movie shows up that is able to satisfy both the critical devil and the mellow angel? Isn’t that – in a way – Christmas in perfection?

Love Actually is, in my opinion, one of these movies. The British-American multi-starrer (with a top-notch and nicely mixed cast consisting of Hugh Grant, Emma Thompson, Liam Neeson, Laura Linney, Colin Firth, Alan Rickman and Keira Knightley, among many others) tells the stories of a handful of people that are all somehow connected to each other, and sums these small bits up to a beautiful tale of love and Christmas. What sounds kitschy here, is indeed undeniably kitschy. But it’s also undeniably beautiful – and entertaining.

The film starts, and ends, at an airport. A place where one of the characters, London’s prime minister (Hugh Grant as we would all imagine him to be like as London’s prime minister), realizes that love is everywhere. After an off-monologue that could have been cheesy but is somehow nothing but sweet (though I suspect some people to think otherwise), we get introduced to the characters, and – as time goes by – their relations are unrevealed. There is the editor-in-chief who is being seduced by one of his journalists, but who also loves his wife and children, the widower and stepfather of a young boy who has just fallen in love for the first time, the newly and happily married girl who’s confused by the love of her husband’s best friend, and many others.

It can be hard for filmmakers to succeed in connecting such a vast amount of small stories, which is why many turn to the opportunity of “just” putting together separate short films and letting their similar context do the work. For example, this was the case in the Indian indie I Am, which I have unfortunately not been able to see yet.

Nevertheless, there are also some more known films that deal – successfully – with truly interconnected stories. Some great films I remember from this category are Amores Perros and Babel, which both dealt with three stories as far as I remember. But none of these films resemble Love Actually, in the way director and writer Richard Curtis connects so many stories. Although the film consists of six stories to the least (plus the comic inputs of Bill Nighy as the rockstar who succeeds in making a comeback with a so-bad-it’s-good version of “Love is all around us”; “Christmas is all around us”), there is an overall connection that makes them work.

The only  film I know for trying something similar, is a lesser known Bollywood/ Hindi film called Salaam-E-Ishq, from 2007. This film, too, tried to connect six different love stories – and didn’t succeed in the slightest. Surely, there are those who loved the film, but in general it was considered a miss. The leaps from one story to another were to big, and there was a grand variety in the qualities of these stories, considering both the acting and the direction.

Ergo, Love Actually is in some ways a one-of-a-kind movie. I recall being surprised when the connection between two stories was suddenly revealed, and how perfectly all of the stories fit together in the (again; kitschy) ending. It was almost like an example from a school book on how to write good essays: make the beginning and the ending connect and let your main theme run through the work like a golden thread.

Speaking of that: although Love Actually is set in the Christmas time and is considered a “Christmas movie” – which is also a very fitting description – I’d say that the main theme of the film is most definitely not Christmas, but love. Different kinds of love, different views on and attitudes towards love, different shapes of love – the cheesy idea that love is all around us. Cheesy, yes – but don’t we all somehow believe in this idea a little? 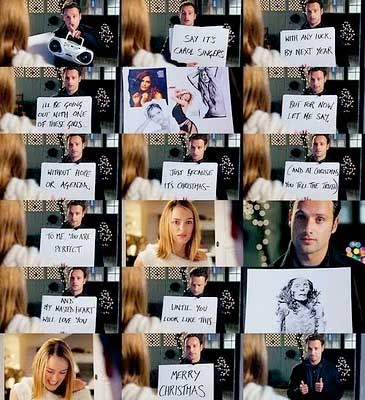 Of course we can’t just ignore the definitely attendant Christmas theme because of this, not least because Christmas is also called the “season of love”. There is certainly a connection between the two terms of “Christmas” and “love”, otherwise, the movie could have been set in any other season of the year. I’m not a christian myself, but I do enjoy and love Christmas for its expression of some of the christian values, such as loving your next and loving unconditionally. This film might take these values a little farther than just platonic or familiar relations, especially considering the extramarital stories, but in the end this makes it a film that mirrors the values of our society in a very accurate manner.

Most of us believe in at least some christian values, but at the same time we have become accustomed to the idea that love comes in various shapes and often various times in your life. It can come when you least expect it. Also, we all share this exact hope: the hope for love. The hope that it’s not just the animalistic need for sex and social relations that forms our relationships.

Perhaps another reason for this is that Love Actually doesn’t try to make absolutely everything work. Yes, it satisfies our hope and belief in the idea of love, when everyone in one way or another get’s their happy-ending (I don’t think I’ve spoiled anything here). But there are still some necessary open ends. Take the story of the happily married girl and her husband’s best friend – an ending to this is never fully revealed.

And even with the remaining stories, we can’t be sure whether something else is going to happen later on, when the credits have rolled – another love, another happy-ending.

But somehow, we do get the feeling in the end that… well, love, actually, is all around.

Posted on Nov 30, 2012 by
Mette Marie Kowalski
19. Traveler, culture addict and aspiring Uptown Girl. Suffers from Peter Pan syndrome. Does her best to improve level of geekiness and explore every corner of the universe.
Follow