Most Notable Snubs for the 2013 Emmy Awards

The 2013 Emmy award nominations were announced last week and, as always, there were some notable absences. Overall, it is a very strong group of nominees, with at least one representative from most of the acclaimed television of the past year. Critical and fan favorites such as Breaking Bad, Mad Men, Veep, Louie, and Game of Thrones were thoroughly recognized, and the first Netflix program, House of Cards, received surprising though not unearned attention. There is little reason to be indignant over their choices, but discussing the snubs is just as much part of the awards tradition as is taking sides regarding the actual nominees.

Everyone will have their personal list of “snubs” or people or series that were not nominated but should have been. Here I present six of mine, in the acting categories and those of overall best drama or comedy.

This is a funny show with a great cast, and the Emmys very well may never recognize it given its broad appeal and weaker first season. As a series, it might not be in the top six but its stellar cast is certainly among the best. Jake Johnson is particularly terrific as the underachieving, self-deprecating emotional center of the group who has recently been promoted to romantic lead. His courtship of Zoey Deschanel’s Jess was one of the most endearing while simultaneously hilarious bits to watch this year. Few moments were as rewarding as their first kiss, which surprised viewers at the end of an episode that had delightfully built up their sexual tension but then seemed to remain in the platonic field. Despite the pay-off kiss, the show continued to play their chemistry for some witty story lines. Meanwhile, the other players – Max Greenfield as Schmidt and Lamorne Morris as Winston – were consistently good. The show appears to have a strong fan base, so it will have many more seasons ahead to convince voters it’s worth appreciating.

I will admit that much of the new season did not work for me, but there was so much great comedy to be had that it is hard to overlook. Jessica Walter, Will Arnett, and Tony Hale were the standouts, and Jason Bateman also nailed the straight-man comedy without which the eccentricities of the others would most likely fall flat. Bateman’s nomination was a nice treat, but it was overshadowed by the general lack of nominations for the rest of the cast and the series itself. Not only is the show one of the best comedies in the history of television, it managed a successful comeback after years of being cancelled. Within the given restraints – primarily of featuring actors with very busy schedules because they now work on other projects – the series pulled off a season with some moments of genius and a whole new set of gags as well as great rendition of old ones. It looks like it will continue to have life as Netflix has said there will be more seasons to come. Hopefully it won’t take the Emmys too long to recognize what ambitious comedy looks like. 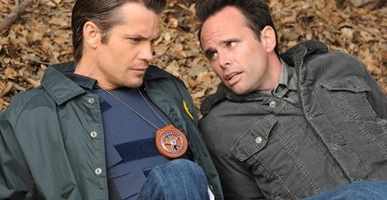 These guys are among the most watchable people on television and yet no nominations! I understand that the dramatic male acting categories are competitive, with people like Jon Hamm, Bryan Cranston, Aaron Paul, Peter Dinklage and Damien Lewis always taking priority. These are all wonderful actors who deserve their nominations. But Olyphant has been a powerful though subtle force on Justified, creating an intriguing and sexy lead while making room for some great supporting work, particularly from his cast mate Goggins. Olyphant’s Raylan Givens has come a long way, and every bit of his journey is made believable through his committed, spot-on performance. In addition to the great writing on the series, the charm of its men is really its strong point. Even if Goggins doesn’t have the classic good looks of Olyphant or his cowboy swagger, he is equally magnetic and so convincing as the morally ambiguous but thoughtful criminal. He is both a foil and friend to Olyphant, and the two together make for one of TV’s most intriguing, unpredictable pairs. These men deserve nominations, and if I had to swap out two other actors in order for them to take their rightful places, I would probably choose Jeff Daniels (who is good but The Newsroom is sad, disappointing television) and Jim Carter.

What does a show have to do to get an Emmy nomination? Other than be funny, sweet, inventive, and unlike anything else on television? Despite its fairly familiar setup, Parks and Recreation has one of the most eccentric casts, helmed by one of the best talents of our time: Amy Poehler. It successfully integrated a few romances without giving up on its brand of comedy, presented its characters with plausible new challenges, and made stars out of its supporting cast – including Audrey Plaza, Aziz Ansari, Nick Offerman and Chris Pratt. It is highly quotable and will be remembered as one of the great comedies, yet was not nominated! It should be in the place of The Big Bang Theory and Modern Family, which are both fine comedies but not as thoughtful or innovative as Parks. Although Poehler was rightfully nominated, none of the truly outstanding supporting males were recognized. Instead of any of the Modern Family nominees, these guys should be up there.

For me, this new FX series with great writing and acting was the supreme snub in the drama category. Not only were the leads – Matthew Rhys and Keri Russell – fantastic, but the show also featured several outstanding supporting performances, particularly from Noah Emmerich, Derek Luke, and Margo Martindale, who received the sole nomination for the series. This is not surprising given that her work was previously recognized for her incredible contribution to season two of Justified. What The Americans managed was a great feat: to create well-rounded, likable yet utterly flawed leads; a magnetic supporting cast; and a plausible-enough spy story that is actually the platform for some interesting and dynamic reflections on love, family, friendship, and loyalty. It had great emotional range while remaining a thrilling show, delivering on its promise of a spy drama – assassination, kidnapping, tailing, eavesdropping, seduction and all. It smartly discussed the conflicting difficulties and pleasures of passion, marriage, parenting, and patriotism, while enticing audiences with enough scenes of chases, sex, hand to hand combat, and spy talk. The balance it struck promises great things for future seasons, and I hope the Emmys won’t be stupid enough to ignore it in the years to come.

1. Parker Posey and David Lynch for their guest spots on Louie

I am so thrilled for Louis CK, for his nomination as lead actor in a comedy and the series itself finally receiving the recognition it deserves. Both are my choices to win. It is a shame, however, that neither Posey nor Lynch were nominated. Lynch not only lay the groundwork for the series to deliver an apt homage, with episodes paying tribute to Lynch’s alternative and unique brand of television in his Twin Peaks, but he also guest starred as a mysterious television executive who was prepping Louie for his potential hosting of The Tonight Show. Thus, his contribution to the success of the series and its offbeat comedy deserve recognition. Parker Posey, meanwhile, was absolutely stunning in two of the season’s best episodes. She played a bookstore clerk who utterly charmed Louie, drawing him into a strange world of vertigo-inspiring rooftops, late night deli meats, and cross-dressing in changing rooms. She was not only so captivating and funny but also had amazing chemistry with CK, perhaps becoming his biggest female challenge on the show – even more so than Melissa Leo’s aggressive window-smasher who semi-coerced him into pleasuring her and also landed him a hard punch on the face. Honestly, I wouldn’t be against an all-Louie category for best guest star in a comedy.

Those are my most overlooked actors and series for the 2013 Emmys. We can only hope that next year bodes better for these talented people and their great shows. What are your disappointments? Whom do you wish were being recognized for their work this past year?

Posted on Jul 21, 2013 by
Melina Gills
Melina Gills is an avid film and television watcher who is studying to get her PhD in Comparative Literature. She is from Brooklyn and also known as Shoot the Critic.
Follow