Only God Forgives Review: The Most Sensual Punch in the Face You’ll Ever Get!

First things first, this is not Drive, so get you’d better just exorcise that little thought from your mind before you head out to see Only God Forgives. It is, however, a challenging, pretentious, cocky masterpiece; oozing with sex, violence and all the pretty colours of the rainbow… especially red. You know, for blood? Yeah. 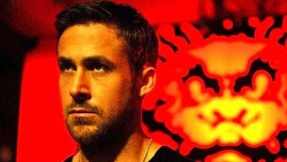 Only God Forgives marks the second team-up of the divisive Nicolas Winding Refn and the easy-on-the-eye Ryan Gosling, and after Drive stomped on all our faces in 2011, they looked like a match made in Heaven (or Hell, as you’ll soon discover). Despite a large amount of negativity, the two have found success together once again, with Nicolas Winding Refn’s (henceforth to be known as “NWR”, ’cause I’m into the whole brevity thing) penetrating style syncing-up deliciously with Gosling’s good looks. Put a pretty face on ultraviolence and you can at least triple the unsettling feeling you’d get from seeing a whiskey glass smashed in someone’s face. I know that because that happens in the film, and it made me feel at least three times as unsettled as violence normally would.

The plot is basic: Gosling’s Julian operates a Thai-boxing club and deals a few drugs in Bangkok. His brother is slain for killing (and presumably raping) a young girl. Julian’s mother, played by the unnerving Kristin Scott Thomas, flies out to Bangkok to get to the bottom of the whole mess; a mess that snakes all the way to Vithaya Pansringarm’s Chang – a retired cop with a few nifty tricks up his sleeve. Don’t go expecting a by-the-numbers film to match the by-the-numbers plot. This movie dances to its own beat.

Call it confident, call it cocky… call it whatever you like. I call it swagger. Swagger is something that Only God Forgives has by the boat load. It doesn’t care what you think, it isn’t here to entertain you. It is here to tell you to sit down and keep your damn trap shut. It’s here to smack you in the mouth when you get too comfortable, and that’s down to the deliberate, pulsating verve of NWR’s direction. It’s impossible to get a handle on his camera. He shows you whatever he likes, whether in side-on tracking shots that let the focus character wander away whenever he sees fit, or in off-centre close-ups that discern every contour of a face. The direction is wild, vital and it feels essential to capturing the terrifying bowels of Julian’s club, which is a hell of negative space and overpowering reds. Julian’s Lynchian hallucinations of blades emerging from darkness to take his hands are a jolt that pushes Only God Forgives almost into horror territory; Cliff Martinez only serves to reinforce that notion, as his music washes over the picture with a sinister poise. Throw in Larry Smith’s dreamy cinematography, and you’ve got one of the most beguiling and nightmarish films in recent memory.

Considering just how technically astute Only God Forgives is, it’s all the more impressive that there is enough going on thematically to satisfy the discerning viewer. Every scene is rife with sexual, religious or familial symbolism (sometimes all three, which is super-creepy), and this feels like one of those movies that will keep you questioning every little nuance. Repeat viewings will no doubt reward with some answers or, even better, more questions. Even though it doesn’t feel like there is a lot going on in terms of plot or pacing, there is no doubting just how provocative the whole piece is, whether you like it or not. Violence will always be a sticking point in terms of relevance to a plot, but here it feels necessary, if a bit excessive. No doubt the eye-slicing scene will be balked at for years to come, but it’s a shock to the system that fits perfectly with the gut-punch of the movie as a whole.

Performance-wise, Ryan Gosling does all that is asked of him in a rather thankless role. He doesn’t say much at all, and shows little intensity, yet his presence seems very important. He seems to give taciturn protagonists much more depth than the paper-thin dialogue allows. It is Kristin Scott Thomas who does the talking for everyone here, with a scintillating show as Crystal: Julian’s disturbing mother. Equal parts erotic, abusive and mental, Crystal is a brilliant creation. NWR gives her some killer lines, including a penis envy bit that’s almost playful in its execution. The majority of the credit must go to Kristin though, as her delivery and demeanour is pitch-perfect, making it refreshing to see an actress ,who so often plays aloof and cold characters, playing a real firecracker. The most pleasant surprise of the bunch is Vithaya Pansringarm, who plays Chang with a quiet aggression that makes him the perfect foil to the noise and brutality of the setting. Throw in some Ki-duk Kim-style quasi-supernatural sword play, and you’ve got a character that feels dangerous and exciting. It’s certainly interesting to see a truly talented triumvirate like this constantly trying to assert their dominance over one another – in fact, it feels like each actor is really pulling out the stops to match NWR’s primary colour-drenched vision of Bangkok.

Ultimately, this isn’t a film for everyone, and believe me, I understand if you hate it. I understand if you want to see me thrown under a bus for suggesting it’s anything other than a steaming pile of crap. But I think that Only God Forgives is the most impressive display of pure filmmaking power we’re likely to see all year; it’s a statement from a young director who truly rates himself amongst the best, and who knows how to deliver his vision. I can’t help but be bowled over by a director who remains uncompromising in his or her endeavours, and NWR has delivered with such dazzling aplomb that it might just be time to start talking about him stepping up to the big leagues.

Posted on Aug 4, 2013 by
David Tatlow
You can call me Tatt. I like all kinds of films, as well as talking to/boring people about them at great length, so brace yourself.
Follow