Overt or Covert: Films and Their Underlying Messages 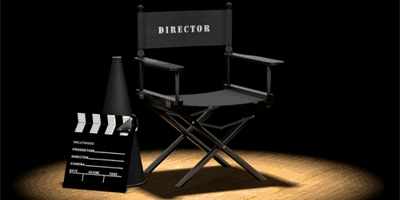 Most, if not all films, have a message. Something that they would like to put across, a cause they wish to promote or perhaps a word of caution to the viewer. The problem that directors face is how far they go to stress their point. Do they make the theme of the film overt or covert. Overt messages cannot be missed, they stare you right in the face forcing the viewer to either agree or disagree. Their strength lies in the certainty of delivery.

However, with the message being so blatant, little room is left for the viewer to make up their own mind. They only have the choice to agree or disagree. Films with a more covert message allow the audience to ponder it more deeply, giving rise to more sophisticated and nuanced thoughts on the subject. The trouble with covert messages is that they can be easily misunderstood – or missed completely.

This article seeks to analyse the two options for film makers by comparing two films with similar messages. The White Ribbon (Die Wesse Band), directed by Michael Haneke, presents the viewer with a small village in rural Germany before the outbreak of the First World War. A series of accidents and violent events take place, leaving the viewer to ponder on the roots of evil – where they come from and how they grow. The Wave (Die Welle), directed by Dennis Gansel, explores similar themes. The film centres around a teacher at a German high school charged with teaching his class about authoritarianism. To do this, and highlight the ease control, Rainer Wenger creates his own Fascist regime, with himself as leader.

Both films explore similar concepts – the root and appeal of evil/Fascism, manipulation of the masses, the growth of undemocratic ideas – but crucially, use very different techniques to show this. The White Ribbon is more covert in its approach, while The Wave is overt, basically telling us its message at the beginning. This article will explore both films to investigate the merits of overt and covert messages in film.

Let us first look at films with an overt message – using The Wave as an example. The central theme of this film is the same as the social experiment upon which it is based (The Third Wave Experiment). It aims to challenge the hypothesis that democratic societies are immune to the appeal of Fascism. Thus arguing that the seeds of a state like Nazi Germany lie dormant in every country. 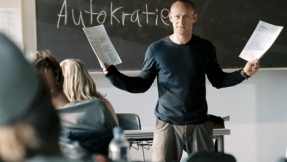 To explore this theme the film shows us how individuals can fall prey to the allures of Fascism. Through order, control, uniformity and discipline the students form a Fascist group. The Wave shows that this is possible by allowing the viewer to witness the creation of a fascist group in a democratic society. In the first lesson students are asked to contribute qualities of Fascism, giving the viewer the criteria by which it can analyse the formation of the student fascist group.

The film thus becomes the example to support the theme’s argument. The message is blatant, unavoidable and overt. What is good about this is that the viewer cannot fail to see what the director wants us to see. The plot of the film is a direct parallel to the argument of the film. The obvious benefit of this technique is that the director can be sure that people will understand his film and the message he is trying to portray.

The downside is that it somewhat detracts from the challenge of watching. You accept the point the film is making from the very beginning and spend the rest of the film only paying attention to the plot. 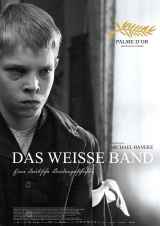 The White Ribbon argues much the same point as The Wave. That underneath a seemingly fair, happy and pleasant society, there lurks something darker and more sinister.

The approach taken by Michael Haneke is much more subtle than that taken by Dennis Gansel however. Someone is attacked while on horseback by a tripwire, a child is abducted and another child with down syndrome is beaten. These violent and unexplained events cause the village, and the viewer to evaluate just what society is capable of. Events that, in the words of the director, ‘could perhaps clarify some things that happened in this country’. This web of hierarchy and violence, and the malice, spite and revenge that villagers exhibit towards each other seem to foreshadow future German events.

While The Wave is overt in arguing its message, The White Ribbon is much more covert. The events of the film only hint at the overriding message. The link between the plot and the theme is alluded to only in passing. It is left to the viewer to realise that the children in the film will reach adulthood during the 1930s and 1940s. Therefore the film is arguing that the roots of Fascism in Germany can be explained by events in previous years.

When weighing up the advantages and disadvantages of overt versus covert film messages it seems that a compromise between the two is the most effective. On the one hand, it is a definite plus to be able to know that viewers understand the message of a film. An overt message allows viewers to come away thinking about the theme of the film, but also having enjoyed watching it. A covert message rewards viewers by making them work that bit harder to get what the film is trying to say. However this can somewhat distract from the enjoyment gained by watching a film. If a film’s message lies somewhere in between the two then the director can be assured of viewers getting the message, but also enjoying watching the film.