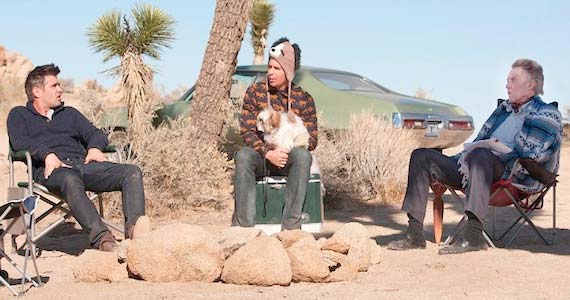 Writer/director Martin McDonagh’s latest film Seven Psychopaths, his follow up to In Bruges, is an oddball of a film. It features outlandish situations that could be categorized as dumb by most standards, but it somehow all comes together as if it weren’t for the strength of the characters and the actors’ performances. So let me introduce you to the psychopaths! The movie centers around struggling screenwriter Marty (Colin Farrell) who is a horrible alcoholic and is having trouble finding any inspiration for his next screenplay “Seven Psychopaths”. His alcoholism is also putting a heavy strain on his relationship with his girlfriend Kaya (Abbie Cornish). There’s also Marty’s best friend Billy (Sam Rockwell) who runs a dognapping ring with his partner in crime Hans (Christopher Walken). These two are pretty much responsible for Marty being dragged into these circumstances of weirdness and violence. This is where Woody Harrelson’s Charlie comes into the picture. Charlie is an insane mob boss who has a creepy infatuation with his dog Bonny the Shih Tzu, and would even kill anyone if they dared look at his dog the wrong way. Obviously Billy and Hans kidnap Charlies dog, but to add insult to injury, Billy is also sleeping with Charlie’s girlfriend Angela (Olga Kurylenko). Our last psychopath is Zachariah (Tom Waits) who answers an ad in the newspaper calling for actual psychopaths to come to tell their stories to Marty, so he can draw inspiration for his screenplay. He carries around a white bunny rabbit, and you would see his photo if you were to look up the word “psychopath” in the dictionary. That’s essentially the story in a nutshell.

The elements that you should take away from Seven Psychopaths is that it’s incredibly violent and unforgiven. It’s a movie about psychopaths! There would be complaints if it were anything less, but to my surprise I’ve read reactions online as to how people were caught off guard by the violence. You should have an idea of what kind of movie you are about to experience based off a title like this, and it’s very specific. It’s very violent and gory, and not for the faint of heart. McDonagh creates a world very reminiscent of Pulp Fiction in its depiction of the LA underground, which can indeed be unforgiven. It’s an impressive screenplay that features fabulous dialogue throughout, and really keeps you engaged. The most fantastic aspect of his script is that it’s essentially a movie within the movie. It’s a meta-narrative at its finest, and McDonagh should be applauded for this. Marty’s ideas for his script “Seven Psychopaths” kinda play out in the way his real life is going at the moment, and he’s drawing inspiration from real-life people. It’s like a rehearsal is being performed in front of him so he can see if all the story and character elements work, and the people in his life are all characters in his story. I like to believe everything that is happening is very much real, and his best friend Billy is intent on all this mayhem making it into his story. It seems Billy set all these situations up on purpose so a kick ass movie could be made. This facet of the film is a masterstroke from McDonagh.

The fact of the matter is that Seven Psychopaths stays afloat because of its characters, and it features an incredibly strong ensemble cast. With the exception of Cornish and Kurylenko, every actor delivers A+ performances. Now that’s not a knock on those two actresses, but they aren’t really given much to do in the film and aren’t really written well. The funny thing is though, that’s a criticism Hans had for Marty’s screenplay when he read it, that his movie has no strong female presence. So it seems McDonagh may have done this on purpose. Sam Rockwell delivers a star-turning performance. Billy is so hilarious, but insanely sick. He has no grasp for reality and doesn’t necessarily see the consequences of his actions. Then there’s Christopher Walken, who really impresses with his acting in this film. It’s definitely the best performance he’s done in ages. He plays Hans with such sincerity and coolness, never appearing to be shaken up by the events that are unfolding in front of him. He acts like everything that’s happening is to be expected. His humorous lines and moments really break up the tension nicely, and brings the audience back down to Earth. Colin Farrell’s Marty on the other hand is the complete opposite. He’s constantly freaking out and panicking at every turn, acting as though he’s a stranger in a strange land. Finally, Woody Harrelson plays Charlie as a crazy oddball, who gets insanely emotional at times. He’s an incredible hard-ass that doesn’t shy away from violence, but it’s all for his precious Bonny. Despite how outlandish these characters are, McDonagh really gives us something to identify with and allows us to emotionally connect with them. That is no easy feat when it comes to characters of this nature.

Martin McDonagh’s Seven Psychopaths is highly original and hysterical. It features a meta-narrative screenplay that consists of rich characters, quirky and outlandish situations, unforgiving violence, and thought provoking dialogue that should engage any viewer with interest in such matters. McDonagh takes the subject of psychopaths and violence, and somehow makes a film about peace and love. That sounds like a complete oxymoron, but trust me, it makes sense once the credits start rolling. The movie may seem especially silly at first glance, but it’s quite meaningful and shocking. This is entertainment at its best.

Posted on Nov 18, 2012 by
Mike G
I'm an absolute film buff, and love writing about movies and TV. I'm particularly a fan of Asian cinema and hope to introduce people to truly great films from that region.
Follow