Practitioner’s note: spiritual master, Amit Ray, once famously said that yoga is the poetry of movements; once you understand the grammar of yoga, you can write your poetry of movements. Quite the affirmation, indeed. Yet, yoga is more than just poetry – it’s art. To use an analogy: the painter shall craft with physical utensils, whilst the yogi shall craft with his physical body. But imagine a craft where the ocean is one’s canvas, the body one’s brush, and its movement the paint. Yes, the surf yoga aesthetic. Let us divulge. 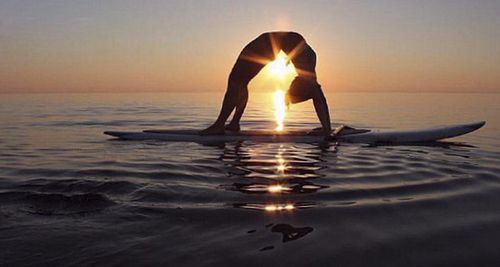 In layman’s terms: Surf Yoga is a converging of two ancient art forms – surfing and yoga. Here we trade yoga mat for surfboard, and studio for ocean. And the method of practice? Answer: the surf yogi will synchronize the human physicality with the natural syntax of the waves; the practitioner’s movement is aligned with the breath – Sanskrit traditionalists call this the state of Vinyasa – and the physical body flows in symmetric synthesis with the ocean. Connoisseurs in the discourse of fine arts will often articulate on the elements of craft: balance, rhythm, and unity. And these very elements are the source of Surf Yoga, too. You see, the surf yogi practitioner functions as an architect, sculpting his physicality – with moment-to-moment finesse – to create a poetical movement; some may say the physical body becomes analogous to the grandeur of an iceberg. Indeed, to quote Ernest Hemingway: “The dignity of movement of an iceberg is due to only one-eighth of it being above water.” The same applies here. You see, the museum of Surf Yoga is the coastal landscape. And, naturally, there are many spectators who appreciate this aesthetic – poetical movement. But the true vantage point is reserved for the practitioner, for it is he who senses the native mastery of the human spirit. To clarify: the visual angle of Surf Yoga is all but a fraction of the artistic circle.

The surf yoga aesthetic is an esoteric art. Perhaps even more so for those inhabiting the Northern Hemisphere; alas, cool ocean temperatures render it a seasonal practice – let’s exclude the brave, here! I digress. Candidly speaking: Man is a perennial theoretician; it is through cognitive availability that he deciphers foreign material – psychologists call this the availability bias. To the contrary: the surf yoga sphere is the antithesis of this – it is mastered (read: understood) through practice, not theory. There are other aesthetics to reference here. Case in point: Stanislavski’s system. Perhaps, Jean Benedetti, said it best: “The Stanislavski system is not an abstraction; it is an activity and a practice.” To infer: “Anyone who imagines that the system will yield results through a purely intellectual, detached comprehension of its basic ideas will be disappointed.” Indeed, one can apply this methodology to Surf Yoga, too. In Surf Yoga terminology: be on the wave.

The surf yoga practitioner comes from a school of thought that advocates the conservation of our oceanic environment. Indeed, it is surf yogic etiquette – law, even – to practice compassion towards marine biodiversity; there’s a collective duty to sustain the ecosystem that supports their art. After all, the ocean is their canvas. But what happens when this natural canvas becomes painted with sewage sludge? De facto: marine scientists report that 60% of our oceans have been degraded. Perhaps it’s time to offend a few people: anthropogenic activity is polluting our marine.

The progression of aquaculture: from 1950 to 2012, the world’s wild fish harvest climbed from 19 million tons to 90 million tons, (U.N Food and Agriculture Organisation, 2012).

Plastic pollution: oceanographers have forecast that there is 315 billion pounds of plastic waste in the ocean. In the pacific, plastic outweighs plankton by a ratio of 6:1, (Algalita Marine Research Institute, 2002).

Ocean acidification: approximately 25% of anthropogenic CO2 emissions are absorbed by the ocean. What this creates is acidic conditions, impacting marine biota and human food sources, (Calderia and Wickett, 2003).

The point here is to articulate the discourse that marine scientists have been broadcasting for the last few decades: biochemical changes to the aquatic environment will mean a uninhabitable ocean, for marine species, by 2050. Alas, we’re talking less than 40 years, here. And it’s a bleak outlook for pseudo-marine forms, too – i.e., Surf Yogis. Urban pollutants – heavy metals, toxic gas, litter, and oil – are being discharged from storm drains and contaminating the ocean. What this creates is a proliferation of parasites, bacteria, and virus; an aquatic landfill is a breeding ground for disease – unsafe for Surf Yoga.

We’re at risk of entering rant territory, here – let us deviate. You see, the art of Surf Yoga is the endowment of stillness it frames, above the chaotic conditions beneath the ocean canvas. The merging of Man and nature. Let’s refer to an ancient verse: ‘Even amidst fierce flames the golden lotus can be planted,’ (courtesy of 16th century, Chinese poet, Wu Ch’Eng-En.) To give a modern interpretation: the lotus flower grows from muddy waters, and yet, its petals emerge unblemished and pure. And then there’s its stem – delicate and flexible; the very artistic components one speaks of in the discourse of poetical movement. Perhaps that’s the opulence of the lotus flower. And, why Indeed, it is this lotus flower that symbolises the classic masterpiece we call Surf Yoga.

Robbins, J. (2010). The Food Revolution: How Your Diet Can Help Save Your Life and Our World. San Francisco, CA: Conari Press.

Posted on Dec 17, 2013 by
Riviera Handley
Located near the ocean periphery, Riviera is a Health Innovations Coach; model; and correspondent in the discourse of nutrition, oceanology and surf performance research.
Edited by Jordan, Misagh, Sean Z, Jon Lisi.
Follow