How Terry Pratchett’s Discworld Has Evolved

Discworld is, in my opinion, one of the most fascinating and intricate creations of literature ever. The ingenious series focuses on a flat planet which rests on the shoulders of four great elephants, which in turn stand on the shell of an intergalactic turtle, the great A’Tuin. But readers quickly realise that it’s much, much more than that. It’s not simply a world that has been created, it’s a mixture of societies, complex characters, different tones of plot and the constant, wonderful parallel of humour and seriousness. It is quite unusual amongst series, in that a reader really can pick up almost any book of Discworld and be perfectly happy without knowing all of the other plotlines. You don’t even need to ever read all of the 39 books, although most readers would find it difficult to choose not to after they get hooked. It is, as author Terry Pratchett once said, a series rather than a serial.

Except there is a series arc. From a wider perspective there always has been one, in much the same way that our own world has what could be called a plotline. In recent times, that arc has become much clearer, and with the announcement of Raising Steam – a book which will likely pull this overall plotline together more than ever before – we can really see how far Discworld has come since a wizzard called Rincewind became a tour guide.

Discworld has always been about change. Every single book involves a major change in one way or another. The very first time we step onto the flat planet, it is already experiencing a major change, in the form of the incineration of the greatest city on the Disc (at least according to them), Ankh-Morpork. Even the books about past events, such as Small Gods or Night Watch, involve huge cultural changes. Nevertheless, it is quite easy to not notice the overall arc of Discworld, especially as to the casual eye it can quickly be overlooked as ‘nothing more’ than a comic fantasy – one with a bit of philosophy here and there, of course, but not much to be amazed about. Even for the bigger fans who sport anorankhs and work on L-Space, it can be difficult to quite realise the scale of what’s going on.

The main series of Discworld (not accounting for the Science books and various other spin-offs like Where’s My Cow) can be split into two major parts – three, really, as there’s no single, clear point of change. There’s the ‘high fantasy’ era of Discworld, the ‘social politics’ era, and the intermediate transition period. Tones of the books throughout the series vary widely – within one era you can have stories in moods as different as the brighter, rather cheerful Going Postal sitting right next to the much darker, quite heart-breaking Thud! – but those differences are miniscule compared to how different books are in each of the three periods of the series. 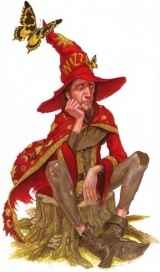 We begin with the ‘high fantasy’ era, which isn’t exactly high fantasy so much as blatant parody of high fantasy. This period lasts from the beginning, The Colour of Magic, to somewhere around the blurry line between Guards! Guards! and Moving Pictures. It’s characterized by a madcap style of writing, extremely fantastical and complicated magical explanations and situations, frequent soirées into the Dungeon Dimensions and an all-round sense of fun, with Rincewind, of course, being the face of the series at this point. It’s the kind of thing that people would have trouble not calling ‘wacky’ or ‘zany’, whatever they actually mean by that.

Around Guards! Guards! and Moving Pictures, however, things change. In these books we are introduced to two sets of characters that would define the middle ‘transition’ period – Fred, Nobby, Vimes and Carrot, the beginnings of the City Watch (which will effectively become the defining feature of the third era), and the motley staff of the Unseen University, who finally give the world of magic a bit more bureaucratic organisation and stability. Additionally, we are gradually introduced to more people who will become well known minor characters in the second and third era – characters like Cut-Me-Own-Throat Dibbler and Reg Shoe.

The second era is simply a transition period, albeit a very long one. We see the growth of Ankh-Morpork in importance as a setting for the series itself, increased significance of characters who represent the city, such as Lord Havelock Vetinari, the Patrician and unrivalled leader of the city, or His Grace, His Excellency, The Duke of Ankh; Commander Sir Samuel Vimes (also Blackboard Monitor), the cynical copper leading the City Watch. However, the ‘madcap magic’ idea is far from gone in this period, with Rincewind returning a few more times, the Death-and-Susan series playing out from beginning to what appears to be the end, the witches growing, changing and adapting and the wizards pulling their own, rather significant, weight in several books.

So where does the transition period actually end, and the third era of social politics begin? Once again, that’s hard to say, but there are three particular points in the series which could be considered the passing of the baton, for varying reasons. The first of these points is The Fifth Elephant, which sees the old, sinister Uberwald beginning to finally relinquish its need to remain a ‘shadowland’ of sorts and come, not necessarily kicking and screaming (although possibly exploding), into the Century of the Fruitbat. The second is the following book, The Truth, which for once sees a technological development in Ankh-Morpork that does not, to Vetinari’s surprise and minor disappointment, result in the invasion of the city by arcane and occult forces, but remains an entirely canny affair (with the exception of the whole interview-with-a-dog thing). The point is impossible to overlook, as it may be the most official transition point in the series. The Last Hero is a beautiful, massive-scale love letter to the madcap-fantasy era before, and almost certainly a passing-on of the Discworld flame from the magical world of the past (Rincewind and the Silver Horde) to the more political steampunk world of the future (Carrot, the new brand of hero). 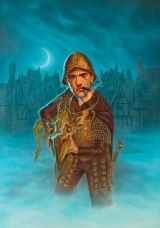 Whatever the actual transition point, there’s no denying how different the new era is to the first, and to quite a lot of the second. This era is about development, technology and social change. We have darker books like Night Watch, Monstrous Regiment and Thud! focussing on major social events – revolution, war, the conclusive understanding of an event, namely the Battle of Koom Valley, which had triggered centuries of inter-species clashes. Then we have the introduction of characters like William de Worde, editor of the Times with his bum stuffed with tweed, and the unfortunately-named golden man, Moist Von Lipwig, who helm much brighter books which are no less relevant, such as Going Postal or Making Money. These novels are also about social change, but in much less violent ways – the introduction and development of new technology, with an important concept of what ‘new technology’ is. It’s not just physical technology, like the printing press or the clacks towers, but also the different ways in which different concepts work best in a society like Ankh-Morpork, or like ours – concepts like the way money, or the news, or government service works.

A slightly more depressing view of this third era is that it, in itself, is also a transition period. Ankh-Morpork is becoming self-sufficient and self-reliant. Although, in earlier novels, the death of Vetinari, whose mind carefully crafted and kept Ankh-Morpork working, would have destroyed the city, the series is reaching a point where Ankh-Morpork can keep itself going without him. Even so, it’s quite clear that Vetinari is training Moist to replace him once he is gone (Vimes’ reaction to that would be priceless), and also that Tiffany Aching is rapidly replacing Granny Weatherwax as the unofficial head of the witches. She still has a long way to go to get respect, but consider this – in I Shall Wear Midnight, the Cunning Man is said to go after the most powerful witch around. It went after Tiffany, not Granny. What does this transition mean, though? Well, the fact is that Terry Pratchett has Alzheimer’s, and may soon have to stop writing Discworld. He has already passed the baton on to his daughter, Rhianna (who is a great writer in her own right, as gamers might tell you), and it’s hard to deny that he’s setting Discworld up for a transfer of its own.

In any case, Raising Steam is coming up, and the question is, what is next in store for Discworld? Raising Steam will see the introduction of trains, solidifying the steampunk concept, and possibly more than just that. In Thud!, we are introduced to Devices, the kind that merit a capital ‘D’, and Vetinari begins plans that will later weigh on everyone’s minds in subsequent books – the Undertaking. A city underground. Perhaps it is because I spent the past few days in London, but I am fairly sure, at least in part, what the Undertaking will be. Raising Steam will, I believe, see the introduction of a subway system in Ankh-Morpork, or at least its beginnings, as well as much easier transport between cities across the entire planet. Discworld has always had it to some extent, but now more than ever it is getting globalised. 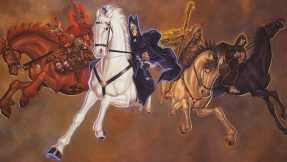 And then what? What’s in store for the world after Raising Steam, assuming all being well with Terry Pratchett? It’s quite impossible to be sure, and we’ll undoubtedly be thrown several curve balls along the way, but we can rest sure in one thing. Discworld is a planet several stages behind ourselves, and it’s going to do what any planet or world would do. It’s going to develop. Technology will advance, likely in points that will be relevant to the world as it is now. Topics that could be considered particularly interesting to tackle would be the justice system (you know, after Vimes has caught the criminals), and personal computer technology (so far all we have is Hex, which is university owned, and a few demon-related jokes).

Of course, I’m probably quite off with my predictions, but that doesn’t really matter – we can be certain that whatever Sir Pratchett comes up with next will be hilarious, insightful and as relevant as always. I look forward to what is to come.

Posted on Jul 25, 2013 by
Joshua Sammy
I sit awkwardly somewhere between the arts, the sciences and my new-found love - languages. I'm obsessed with Doctor Who, film scores, Discworld and just, well, stuff.
Follow