The Anthology Film: Its Parts are Only as Good as its Whole 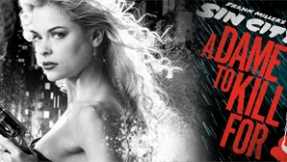 At present we are all waiting for Sin City: A Dame to Kill For, only to be disappointed by the news that it has been pushed back by almost a year from October 4th 2013 to August 22nd 2014. The original Sin City released back in 2005 was widely commended for the imaginative use of its pulp noir visuality. It was one of the first films alongside Sky Captain and the World of Tomorrow and Immortel that made use of digital backlot shooting. While green screens are common place in film production these days, the use of a high definition camera is noteworthy. The movie was shot in high definition colour, converted to black and white and then subjected to colourization on objects imbued with symbolic relevance or for artistic contrast (green eyes, red blood etc.). The directors Frank Miller and Robert Rodriguez also make use of high contrast and negative space that bring Miller’s comics to life and create the atmosphere of sultriness, abandon and tension typical of film noir.

Sin City is based on Miller’s first, third and fourth comic and includes the story lines The Customer is Always Right, That Yellow Bastard, The Hard Goodbye and The Big Fat Kill. Sin City: A Dame to Kill for will use the storylines A Dame to Kill for, Just Another Saturday Night, The Long Bad night and following on from That Yellow Bastard, Untitled Original Storyline. We can expect the return of Jessica Alba to this storyline as Nancy is now trying to deal with the death of Hartigan. As this is going to be an exceptionally psychological storyline, perhaps the sequel will be less emotionally distant in its treatment of narrative material than Sin City. While critics were overwhelming generous in their analysis of the film style of Sin City, there were a number of claims that Sin City was lacking in humanity. In some cases extremity should be treated with emotional distance so that the audience is less affected, but I can’t help but feel that the relationship between Hartigan and Nancy should have been more touching. There have been other reviews that claimed that Sin City was over the top: every woman is stunningly beautiful with tortured eyes and heaving bosoms and every male character is a tormented soul; damaged goods on a mission. 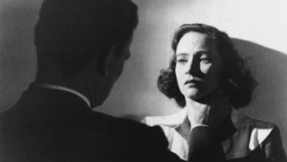 Film noir is supposed to be like this though! Film noir is supposed to be furtive sidelong glances in extreme close up, soft focus for the innocent girl, hard contrast and deep shadows for the villain. Sighing damsels can turn out to be viperous Femme Fatales and the male protagonists end up being her sucker – that is, until he wisens up and turns her out. Remember Barbara Stanwyck and her ridiculous wig in Double Indemnity or Uncle Charlie’s “choke hands” in Shadow of a Doubt? Those films were supposed to be highly dramatized as was the style of the 1940’s. When this translates to the 21st Century where the trend is realism, the style remains the same but the affect and reception is expectantly going to be very different.

This year brought forth the much anticipated Movie 43. With a humongous all-star cast, Movie 43 is a collection of vaguely interconnected short story lines which are pitched as possible film storylines by a washed up producer (or if you watched the UK/ AUS version like me, a group of kids searching for a fabled Movie 43). The film was a decade in the making with Peter Farrelly and twelve other directors struggling to find a studio who would foot the bill for production until Relativity Media picked it up for $6 million. Critics have largely panned the film, Richard Roeper of the Chicago Sun-Times gave the film zero out of four stars calling it the “Citizen Kane of awful”. Robbie Collin of The Daily Telegraph described Movie 43 as “the work of a confused man thrashing around in an industry he no longer understands”. Peter Howell of the Toronto Star called it the worst film he had ever seen and gave the film zero out of four stars. This is a bit harsh. While I wasn’t rolling about holding my sides, there was no way I was going to sit there stony faced while Hugh Jackman dipped his chin balls in soup or while Christopher Mintz-Plasse tries with desperation of any panicked teenaged boy to fix Chloe Moretz’s first time menstruation with a mop head or my personal favourite, Halle Berry ruining a blind kid’s birthday party. Movie 43 comes from the same strain of comedy as Scary Movie or Year One, it is supposed to be a gross-out comedy that is silly and most of all, caters to the 15-25 year old age group: the top grossing consumer group. The A-listers who participated in Movie 43 were doing this film for fun (with the exception of Richard Gere who tried to get out of it), only getting paid $800 for participating. Critics and viewers alike should take this film for what it is: A-listers having a good time making silly little sketches to make their fans giggle. 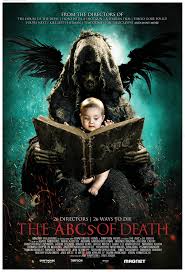 In 2014 we can look forward to the sequel of The ABCs of Death with The ABCs of Death 2 underway. This time we can anticipate shorts from Marcus Dustan (The Collector, The Collector 2, Saw IV and Saw V), Alexandre Bustillo (Inside) and Larry Fessenden (Stake Land and Cabin Fever 2) as well as a number of new emerging directors. Hopefully the sequel will not be as touch and go as the original The ABCs of Death released at the start of 2012. There were some very clever segments in the original ABC, most notable was ‘A for Apocalypse’, ‘C for Cycle’ and ‘X is for XXL’, but these were a little overshadowed by the larger amount of sillier pointless segments such as ‘F is for Fart’ and ‘K is for Klutz’ where the directors utilized toilet humour rather than using this opportunity to showcase their skills in a short. F could have also been for Fracture, Frienemy or Fixation but in this case it was a Fail.

The anthology film is the pick and mix of films: it is like getting a bag of skittles and eating all the colours except yellow or getting a mixed box of doughnuts and eating all the icing ones but leaving the doughnuts with sprinkles. Not every segment is going to appeal to the whole audience, some anthology films are more miss than hit such as The ABCs of Death. But others such as Monty Python’s The Meaning of Life, Three…Extremes and V/H/S have demonstrated the worth of anthology films. Bring on Sin City: A Dame to Kill For and The ABCs of Death 2, the anthology film as a whole will only be as good as its parts and if the hype is anything to go by it will be worth keeping an eye out for these two in 2014

Posted on Jul 9, 2013 by
Kahlia Sankey
Kahlia is a PhD candidate at Griffith University who specializes in horror genre films, gender performance and audiences.
Follow