The Face of Classist Tyranny: Haddix’s Uprising and Yezierska’s “Soap and Water”

Margaret Peterson Haddix, in her novel Uprising, and Anzia Yezierska, in her short story “Soap and Water,” capture the horrific effects of the tyrannical classist environment on the lives of lower-class immigrant women in early twentieth century New York City. Haddix and Yezierska construct strong, laudable, brave female characters who immigrate to New York City with the hopes of having opportunities to earn money and lead free lives. Both Haddix’s and Yezierska’s characters represent non-WASP (White Anglo-Saxon Protestant) ethnic and religious communities, and the oppression and biases they encounter from members of other populations are related as much to matters of identity as to issues of class. This struggle of being part of the “wrong” groups is especially pertinent in the situations experienced by Yezierska’s narrator. By creating likable, hopeful characters, Haddix and Yezierska forge deep connections between readers and the insightful stories of two women and their struggle to survive in America. The second chapter of Uprising and Yezierska’s short story “Soap and Water,” raise issues of class and labor by painting a raw image of what it meant to be a poor female immigrant living in New York City in the early twentieth century. 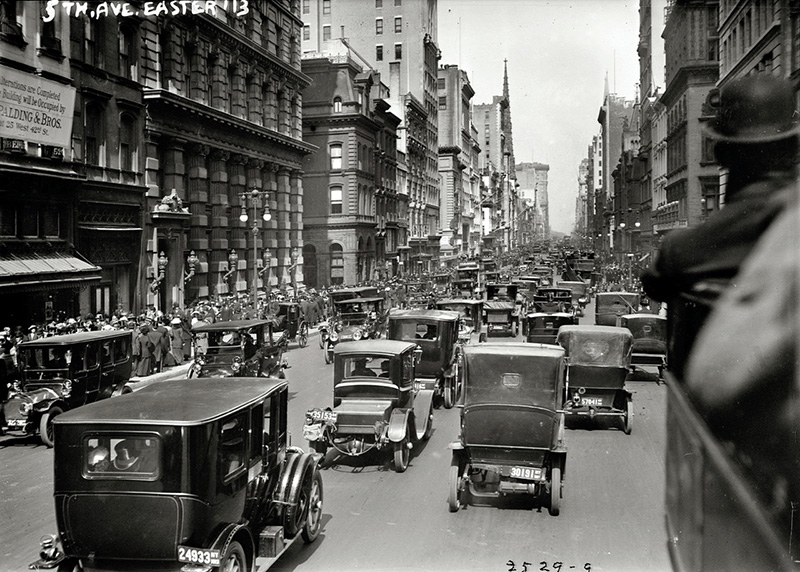 The social hierarchy of New York City in the early twentieth century determined the harsh realities of life as a lower-class citizen. Yezierska’s narrator and Bella, the protagonist of the second chapter of Uprising, are bound by class to follow the tyrannical unwritten rules determined by their superiors. Both characters are overwhelmed by feelings of powerlessness. This helplessness is a rite of passage for all lower-class peoples, especially poor female immigrants. Yezierska and Haddix lead readers to view issues of class and labor by constructing honorable, courageous female characters trapped by their economic status. The narrator of Yezierska’s short story works all hours of the day doing the laundry of those who are essentially her peers, in order to pay for a college education. She is determined to learn and yearns for what she calls “larger life” and “for the stimulus of intellectual associations” (Yezierska, 74). This determination is intended to make readers connect with the character and the story. Despite successfully receiving a college degree, she is still only judged in terms of her social status as a poor immigrant woman. Ironically, here, the source of Yezierska’s narrator’s alienation is the prejudice against her identity as a Russian Jew, exercised by an educated, middle-class WASP woman—there is clearly unspoken anti-Semitism in the accusation (made by one of her female oppressors) that the narrator is “dirty.”

In turn, Yesierska’s narrator is forced to work the lowest-paid substitute positions to avoid starvation due to her lack of income. The hierarchal order of New York City at the time determined her income and, thus, her quality of life. She is “tricked and foiled” and “considered unfit to get decent pay,” because of her appearance, and is “forced to accept” working for low wages (74). The narrator’s rage and emotional turmoil caused by class oppression is evident in the statement: “the vicious circle of society’s injustices was thrust like a noose around my neck to strangle me” (75). In revealing the narrator’s upsetting thoughts and feelings of helplessness, Yezierska humanizes the character and evokes sympathy and outrage at the classist system in readers’ minds. 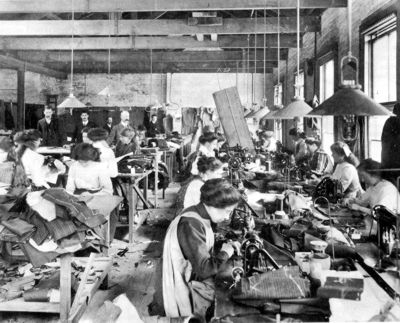 Bella, on the other hand, has come to America to make and send money back to her family in Italy. In order to save her family from starvation, Bella is forced to accept horrible working conditions, long hours, and the abusive treatment of her boss. Bella’s first experience in the factory gives readers insight into the unjust, inhumane environment that working-class women of early twentieth-century New York City endured in order to make a living. Not only is Bella overwhelmed by a sea of loud voices that she does not understand, but she is verbally assaulted by her boss. She makes the mistake of leaving the building with workers who are going on strike due to her inability to understand what anyone is saying and pays the price.

In the narration, “Bella was so dizzy, light-headed, and hungry by late in the day” and “For all she knew, the entire crowd was laughing at her,” the audience is led to pity Bella, and be disgusted by the quality of life thrust upon working class women at the time (Haddix, 23/27). After innocently leaving the building with the strikers, Bella comes face to face with the tyrannical hierarchy that deems the working classes as the bottom of society. Her cousin Pietro is able to convince Signor Carlotti, her boss, to rehire her by agreeing that Bella will work four days without getting paid. Bella is outraged at the injustice of having to work for no pay and disturbed by the amount of control some man she just met has over her income and, consequently, the health of her family. Through her thoughts, “But that’s not fair! […] That is cheating! How can they expect me to work for nothing?” readers are meant to feel Bella’s anger towards the American labor system (30). Haddix renders the American labor system the enemy for its lack of either protective legislation or unions, which resulted in the exploitation of workers. Haddix wants readers to feel enraged and horrified along with Bella, and to picture having to work in such a hostile environment for no compensation.

Yezierska’s narrator and Bella immigrated to America for different reasons, but are both largely disappointed with the lack of freedom and possibility that characterizes the reality of life for lower-class immigrants in early twentieth-century New York City. Both characters, prior to migrating, envisioned America as a place of opportunity and believed in the “American dream.” However, they are blindsided by the reality of being members of the working classes and having to serve those above them to 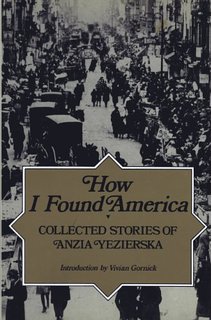 survive. The narrator of “Soap and Water” is a refugee, a “visionary immigrant,” from the Russian Jewish pogroms, whereas Bella is an immigrant from Italy coming to America to provide for her family. In turn, Yezierska’s narrator “hungered and thirsted for America” in comparison to Bella, who came to America with little-to-no preconceptions of America but the notion of America as a place of fortune (Yezierska, 75).

Yezierska leads her audience to personally connect with the narrator by portraying the character as an underdog with immense hope and determination existing in a repressive society that uses her social status as chains to hold her down. The character’s faith and perseverance are evident in the statement “And so, though my faith in this so-called America was shattered, yet underneath, in the sap and roots of my soul, churned the deathless faith that America is, must be, somehow, somewhere.” (75). Here, Yezierska encourages readers to believe in the narrator and to invest in the struggle of a Russian visionary trying to make a life for herself in 1920s hierarchical New York City.

Similarly, Haddix connects readers to Bella, in the second chapter of Uprising, by constructing a brave, selfless character who migrates to America intent on making and sending money to her family, in Italy, to keep them alive. Right from the start, Haddix evokes sympathy in her audience by detailing the unjust first work experience of an innocent, unaware, and helpless immigrant girl who is determined to save her family from starvation. Haddix creates this selfless character by narrating Bella’s thoughts, such as, “I can skip lunch today if it means that next week Mama will have money for food for Guilia […] I can bear anything for Guilia” (Haddix, 23). Here, Haddix makes it impossible not to root for and sympathize with Bella.

In addition, the way in which Signor Carlotti, Bella’s boss, shouts at and degrades the female employees, especially Bella, reveals the power of the gender hierarchy in New York City at the time and demeaning, abusive environment poor women had to endure in order to make enough money to survive. For example, “ ‘You idiot girl!’ he screamed, shaking the shirtwaist in her face. ‘Can’t even handle a simple job like this! Look at the thread you missed!’ The offending thread unfurled from a hiding place in the sleeve. It dangled in front of Bella’s eyes, a mark of shame” (20). Here, Signor Carlotti’s position of authority as factory supervisor is based on gender; thus, despite the fact that he is also a member of the working class like the female employees being male indicates that he is a step above them in society’s 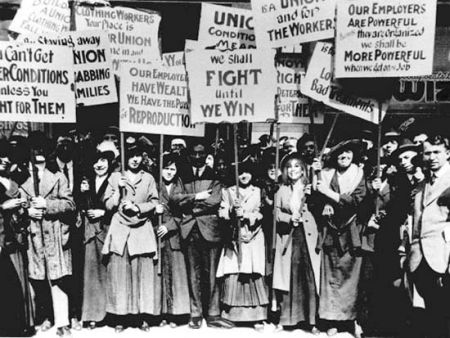 hierarchal system of power. Haddix uses Signor Carlotti’s horrific treatment of Bella to capture the oppressive and dehumanizing atmosphere forced upon working-class women. Haddix, like Yezierska, attempts to make readers aware of what it meant to be a working-class female living in New York City at the beginning of the twentieth century.

Uprising and “Soap and Water” capture the raw emotions of two poor female immigrants as they struggle to survive in a world in which their class determines their present and future. As Yezierska’s narrator and Bella are demeaned and abused by those deemed superior by class, or gender, or ethnicity in Yezierska’s story, the fact that the narrator’s teaches the WASPS is important; in Haddix’s novel, gender hierarchies matter, too. Haddix and Yezierska intend to shock readers with the cruelty of the American labor system in the early 1900s. Both Haddix and Yezierska let readers into the minds of their characters to make readers experience the struggle of each woman. Audiences are meant to feel enraged and appalled at the notion that, in early twentieth-century New York City, where one existed on the ladder of power in society—a ladder determined based on class, ethic identity, or gender—decided one’s reality and, often, one’s place on the hierarchal ladder represented the difference between being alive or dead—citizen or slave.