The Photographs of Martin Mischkulnig: The Bland and the Beautiful

Over recent years I have found myself becoming increasingly fascinated by the photographs of Martin Mischkulnig. There could be many reasons for this growing appreciation, the biggest, of course, being that I myself grew up in a small town in regional Victoria. Beyond this obvious tug, however, is a preoccupation with the vernacular aesthetics of regional Australia (one that I have had since childhood).

Mischkulnig grew up in South Australia, the son of migrant parents who devoted themselves to the business of running roadside motels. These motels were neither in popular towns, nor near tourist attractions, but were available as a place of respite for the weary traveler mid way through their journey. Smalltown, Mischkulnig’s collaboration with author Tim Winton, is, perhaps, a thoughtful response to these ‘non-destinations’ that are often devalued by society. The series Smalltown has been exhibited across Australia in recent years, and was published as a coffee table book in 2009. In an exhibition review, George Main sings the artist and author praise as he describes the experience of the show in detail (2012). The series delicately frames an unique and rare perspective on the far-flung and neglected towns that make up much of regional Australia. Here Mischkulnig and Winton capture the strange blend of the extreme beauty of the natural world and the ugliness of the structures that people have built within it.

In an interview on the ABC program Enough Rope in 2004, Andrew Denton described Winton as having shown “an exquisite feel for the language, the smell, the very pulse of Australia” (Denton, 2004). After reading Winton’s books, Mischkulnig felt that he truly understood the concept of Australian small towns. Winton was, therefore, the obvious choice of voice for the project (White Space, 2009). The author paints a detailed, contemplative and enchanting picture of ‘smalltown’ Australia in his accompanying essay (featured at the front of the book, and as excerpts on the walls of the exhibition). 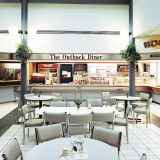 The photographs in Mischkulnig’s series were drawn from three road trips around Australia – the best way to see the country of course! With his 8 by 10 inch large format camera, the artist travelled from New South Wales to South Australia and back again, to Tasmania, and finally from Perth to Darwin, avoiding too many coastal roads. The strange thing about our country is that no matter where you are, you will see the same type of dated, run down, battered buildings that are, somewhat, iconic of Australia. As both Winton and Mischkulnig testify, there is a strange beauty about these neglected, and (often) odd places. The more people I show these photographs to, the more it appears that the sense of nostalgia and familiarity that accompany the images is not unique to my own feelings. Each person, it seems, has a story that can be associated to at least a couple of the photographs in the series. The photographs do not appear to rely on the title (which tells of the location in which it was taken) to describe the narrative behind each, but rather encourage the viewer to reminisce upon similar experiences of their own. These subjects and scenes are representative of an entire country of similar sights, and are not unique only to the places to which the artist travelled. In this way the series can be held close to the heart by most who have ventured beyond the outskirts of metropolitan Australia.

In a way Mischkulnig’s collection of photographs, inspired as they are by his own experience of life in a road side stop, and gathered by hours spent on the road, remind me of the image of the American landscape that Steve Fitch and Stephen Shore have created. The early 1970s brought with it a revolution, you might say, of the norms in landscape photography. Up until this point, the great masters of photography, led by Ansel Adams, had set a tradition of the representation of the sublime, majestic, and idyllic landscape. These images were usually unoccupied by human presence, focusing instead on the romanticized, grandeur of nature. The change that the 70s brought was one that was informed by the expansion of suburbia, the reality of the interstate highway system, and a preoccupation with the way lived-in environments were rapidly changing. Fitch and Shore, alongside other photographers such as Robbert Flick and Elaine Mayes, were amongst the new wave of artists who were striving to document the blend between the human and natural worlds.

Fitch’s series, Diesels and Dinosaurs (1976) is a photographic documentation of the roadside culture of America. His images are of places in which the natural environment and the human built environment meet, and are, in a similar fashion to Mischkulnig’s subjects, not in themselves destinations. Billboard, Highway 180, Grand Canyon, Arizona (1972) is literally just that; a billboard on Highway 180, near the Grand Canyon, Arizona. The refined composition of the image draws our attention within, to the details that we most definitely would have missed if the artist had not shown us (even more so because most of us would not have stopped to admire such a sight in the first place if we were in his position). Here the artist illustrates the merge of natural and human in the most simple and un-unique of circumstances.

Shore’s series, The Hudson Valley (photographs taken from 1985, 1986 and 2011), presents a similar outlook on the subject of the everyday. Shore, like Fitch, provides a simple and thought-provoking view of beauty in the most average of situations. In this series we witness the photographer’s focus upon the merge between natural and man-made places, and the desire to share an appreciation for these sites. Shore encourages us to see the aesthetic quality in the most banal of scenes, presenting the viewer with images of the undergrowth beside railway lines, and the driveways of suburban houses. In my eyes, non go so far than his image of a traditionally picturesque view, with full emphasis on the graffiti that has been sprayed in the foreground. This, I believe, is a stark and truthful acknowledgement (even an appreciation) for the interaction between people and their surrounds.

Beneath the photographic movement of the 1970s dwell ideas of the relationship between people and their ‘home’ environments. Similar thematic veins run throughout the Smalltown series, and the writings of Winton.

“The way Australians build and live in the outback bespeaks a lack of commitment. There is no physical evidence of conviction, no faith in permanence. In today’s outposts of progress, buildings look as temporary as it’s possible to make them without reverting to canvas” (Winton, 2009, pg 28).

Winton’s words remind me of the writings of Tasmanian philosopher Jeff Malpas, who has researched the relationship between man and his environment to a great extent. Malpas explains the reasons behind the development of a ‘sense of place’, and the fondness that we develop towards particular locations, whilst noting the mutuality between man and the natural world (Place and the Human Being, 2008). We attempt to affect the places in which we live, changing them, manipulating them, and asserting some kind of control over them. We take responsibility and ownership over ‘our land’, yet those places affect us just as greatly (if not more so), in the most dramatic and, often, inescapable ways. Winton suggests that outback Australian towns look like they do because the residents appreciate and understand the temporality of the places in which they live. Winton does, however, expand on this representation:

“While it might be comforting for people to think of themselves as perennially unfussy, there comes a point when they should own up to the fact that they simply can’t be a***d doing certain things properly” (Winton, 2009, pg 28, 29)

Blunt as he may be, Winton still speaks with an air of tenderness. It is without spite or embarrassment that the author describes the realities of the rural Australian township. 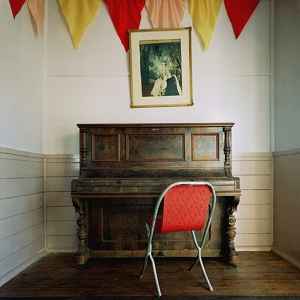 The illustration of regional Australia that Mischkulnig presents in his series is comprised of a collection of indoor and outdoor photographs, from both day and night. The images feature people just as often as they do not, but regardless of the inclusion or exclusion of human presence, each tells a story about the interaction of people with their own environment. The images are typically simple in construction and are composed with minimal information, focusing our attention instead upon the details that are most telling about the place. Obvious care has been taken in the composition of each frame, including only necessary detail, but capturing elements of the place that we might otherwise miss. Mischkulnig here reveals his aptitude for noticing the beauty in the places that most would rather politely ignore. The colour palette stands true to the varied personality of country Australia, ranging from the greens of Tasmania, to the reds and oranges of the outback. In a way that is comparable to the photographic movement in which Fitch and Shore were involved, Mischkulnig has photographed the locations in which the natural and man-made meet. The common aesthetic of the places within each photograph draws the series tightly together, presenting a unified representation of the Australian small town.

Mischkulnig and Winton are able to depict small town country Australia in the way that they do, because of the deep appreciation that they both hold for the land and its people. As Winton states:

“I love the sense of sanctuary small towns provide, the possibility of intimacy they retain, the way you can keep an entire population in mind as a distinct group of faces and traits and characters rather than as an abstraction. Living in a tiny community in a rugged landscape requires a form of hardiness I admire” (Winton, 2009, pg 29).

As dated and unattractive as many townships may be, this is the Australia that both the artist and author love and adore. There is a sense of fondness that we (I presume here that many would agree with me) hold for the old-fashioned little truck stops that we pass when we go on holidays; the way that the Oodnadatta Roadhouse (in the middle of the outback) is painted bright pink; and the décor that every single clubhouse and town hall around our country all seem to sport. As far from aesthetically pleasing these places and buildings often are, they are ours. Mundane and vernacular the subjects of Mischkulnig’s photographs may be, they are true, and they are beautiful in the ugliest of ways.

Posted on Jul 8, 2013 by
Ashleigh Simpson
I recently completed a Bachelor of Fine Arts with Honours, and am about to begin a Master of Art Curatorship at the University of Melbourne.
Follow

Women, Culture and Politics: Buffy’s Critical Bite
The History of Chinese Painting
Has Pop Music Simplified Over Time?
The Appeal of Reaction Videos
The Unpopularity of the Ebook
Presenting Problematic Issues in Art
The author’s propriety.