Last year, the world squealed in anticipation for the grandest Marvel Comics movie ever assembled. The Avengers sent Marvel flying into the record books – becoming one of the universe’s most popular and profitable brands. Today, even the stuffiest filmgoers rush into theatres to behold every instalment of Marvel’s Phase Two fleet. These summer blockbusters, sequels to successful character pieces/origin stories fitting into Phase One’s hefty crop, affectingly draw mass audiences to the cinema. Whether its the startling attention to detail or thundering explosions luring people in, I’m willing to give mega-conglomerate Disney the benefit of the doubt. If Thor: The Dark World is anything to go by, the following Phase Two blockbusters should be splendid and satisfying indeed.

Upping the ante, in all respects, over its zippy predecessor, Thor: The Dark World is a whiz-bang blockbuster for the masses. Many admirable traits stand out in this zany and gripping fantasy-superhero flick. Despite its flaws, the movie’s ambitiousness and style will help viewers overcome minor quarrels and enjoy the experience. Though the plot is the least important aspect of this kitsch explosion-fest, filmgoers may be intrigued by the characters’ antics and backstories. Like in the original, Anthony Hopkins’ thunderous voice relays vital information. Thankfully, the prologue is the most difficult-to-interpret facet of this otherwise thrilling tale. Long ago, the Nine Realms, of which Midgard (Earth) and Asgard (Thor’s homeland) are included, were attacked by snivelling baddies known as the Dark Elves. Led by Malekith the Accursed (Christopher Eccleston), the Elves tried to destroy the universe with an apocalyptic device called the Aether. This MacGuffin, obtained by the Asgardians after the war, is, for some reason, hidden under an abandoned building in London. Incidentally, astrophysicist and God-of-Thunder love interest Jane Foster (Natalie Portman), Darcy (Kat Dennings) and Dr. Erik Selvig (Stellan Skarsgard), are stationed there. Meanwhile, Thor (Chris Hemsworth) and his comrades, Sif (Jamie Alexander), Fandral (Zachary Levi), Volstagg (Ray Stevenson), and Hogun (Tadanobu Asano), are battling monstrous adversaries to maintain peace throughout the Nine Realms. Also, on Asgard, King Odin (Hopkins) punishes Thor’s half-brother Loki (Tom Hiddleston) for his involvement in the New York saga. However, everything grinds to halt when Malekith rises from his eternal slumber to exact horrific vengeance upon the Nine Realms. 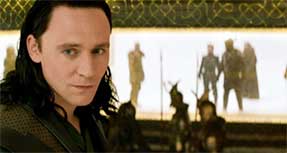 Obviously, illustrated by the intricate plot synopsis above, Thor: The Dark World seeks to cram every wackily brainstormed idea and overused superhero-action cliche into its significant run-time. The story, becoming needlessly simplistic after the baffling prologue, copies and pastes plot-strands and twists from other, similarly epic, fantasy-action flicks. Despite its refreshing distractions, the narrative abruptly slows down whenever the cheesy exposition and motivations are established. Following a sci-fi/superhero movie formula, the movie sticks too close to typical ‘Hero’s Journey’ plotting, seen before and done better in such blockbusters as Star Wars and The Lord of the Rings. Also, the comic-books’ detailed mythology becomes difficult to grasp. The MacGuffin, needlessly described over and over again with irritating jargon, is a less interesting version of the Tesseract from The Avengers. Just once, fictional heroes and villains should fight over something more worthwhile (just sayin’). Despite these minor issues, Screenwriters Christopher L. Yost, Christopher Markus, and Stephen McFeely, coming off of commendable efforts including Captain America: The First Avenger and Pain and Gain, elevate the derivative and convoluted narrative with a knowing sense of humour and an array of engaging characterisations. With the word ‘dark’ in the title, this sequel appeared to be heading down a sinister path. However, the outlandish characters, defined by peculiar races and creeds, acknowledge just how perplexing every quest, discovery, and fight sequence is. Thankfully, intelligent comedic moments, aided by sharp comedic timing from the entire cast, emphasise Joss Whedon’s stamp on Marvel’s recent cinematic efforts. With several punchy one-liners, fish-out-of-water gags, and clever cameos, Thor: The Dark World contains more laughs than any of 2013’s big-budget comedies. Surprisingly, the cutesy relationship between Thor and Foster, thanks to Hemsworth and Portman’s lasting chemistry, breathes life into this plot-heavy superhero flick.

The original, using a small sense of scale for its gleefully entertaining origin-story structure, was criticised for refusing to display every square-inch of Asgard and the other Realms. Its Steven Spielberg-like infatuation with quaint small-town settings is dropped for the sequel. Unlike most superhero sequels, the ‘bigger is better’ approach succeeds in Thor: The Dark World – emphasising the quirkiness, beauty, and grandiose nature of the comic-books’ dense universe. The movie, hurriedly jumping between Earth and the other realms, beefs up the movie’s fantastical elements whilst maintaining the drama needed for these large-scale blockbusters. Despite relying on CGI overload, the production design develops a unique and ingenious identity for each populous. The original’s strangely disparate Asgard is replaced with an awe-inspiring landscape featuring aspects of Coruscant and Rivendell. Crafting Golden cityscapes, lush forests, and the Bifrost (gate between realms), the kinetic CGI effects suit the movie’s epic narrative. Thankfully, the other practical and CGI creations are as jaw-dropping and inspired. Restricted to a handful of sets in the original, the Thor franchise has expanded to move away from the Avengers‘ gigantic shadow. Here, director Alan Taylor (Game of Thrones) takes a leaf out of George Lucas’ book. Thor: The Dark World, providing a gritty and inventive visual style, ably handles its inter-twining plot-strands and realms. The warring factions, resembling those of kooky 80s sci-fi flicks like Flash Gordon, are immaculately brought to life. Leaping off the screen, the armies, creatures, costumes, weapons, and spaceships lend themselves to this expansive universe. The action sequences also impress. Easily surpassing Kenneth Branagh’s stilted action-direction, Taylor applies his Game of Thrones experience to the movie’s rough-and-tumble set-pieces featuring varying hordes and battalions. Using impressive fighting styles to distinguish each character, the action sequences become some of the movie’s most enthralling moments.

This post-Avengers universe, leading to TV series Marvel’s Agents of SHIELD, is riddled with references to major superheroes and previous instalments. Nowadays, Marvel’s greatest movies are made whole by their titular characters. Gracing each poster and trailer, critical and commercial success rests on each superhero’s broad shoulders. Thor: The Dark World focuses on establishing Thor as an enviable, energetic, and courageous figure. Despite his raw power, Thor is still depicted as a likeable saviour. A physical and political badass within the Nine Realms, complete with Mjolnir (the hammer), Thor is a staggeringly impressive character. His entrance, defined by spectacular fighting skills, establishes a cheeky yet powerful force of nature. After his charismatic performance in Rush, Hemsworth again proves he has the immaculate range and talent for leading roles. Showing off his enviable physique, Hemsworth’s boyish charm and engaging screen presence illustrate his emphatic devotion to this entertaining role. Snivelling evildoer Loki is also a fascinating character. Despite being stuck in prison for the first half, his quips, Cheshire Cat grin, and peculiar personality establish him as, arguably, Marvel’s greatest cinematic antagonist. Hiddleston, becoming a fan favourite for handling the difficult role with such tenacity and verve, is an engaging screen presence in this understated role. Partnering Thor and the Loki in the second half, the movie is ignited by their witty rapport. The supporting characters, rounded out by elaborately armoured gatekeeper Heimdall (Idris Elba), are elevated by the movie’s enlightening international cast. Hopkins’ regal performance lends dramatic and emotional weight to the movie’s slowest parts. His character, defined by an impressive beard and shiny eye patch, becomes a necessary hindrance for Thor and Loki.

Distinguishing itself from The Avengers, and even Iron Man 3, Thor: The Dark World is a convoluted yet energetic and humorous superhero flick. Allowing each character to take control of the screen, the movie intelligently references previous instalments and sets up future sequels. With Marvel’s on-going success resting on Captain America: The Winter Soldier and Guardians of the Galaxy, Thor: The Dark World proves magic and science can co-exist within Marvel’s increasingly enthralling multi-hero saga. I give it…’Thor’ out of five (du dun chh)!