By now, most people are familiar with the concept of crowd-funding projects. Kickstarter and other crowd-funding systems are a bit of a mixed bag. I have backed four Kickstarter projects so far and three of them have been completed or are well into production, with one other project so hopelessly delayed that none of its backers ever really expect to see it. One of the projects I’ve backed is TOME, the inaugural effort by 44FLOOD. I have to say my faith in crowd-funding has been bolstered and my interest in seeing more projects from this group has gone through the roof.

44FLOOD is made up of Kasra Ghanbari, Nick Idell, Ben Templesmith and Menton3. The group formed with the purpose of making art and story the way THEY want to; without any editorial or creative interference. TOME is the first book to come from their collaboration and is both a stunning as well as intimidating thing to behold. TOME is a whopping big book at 12×18” in hardcover with heavy paper stock and wonderful print quality for a book of this type, ‘this type’ being an eclectic art book with an overall theme of vampirism. While the theme is very flexibly defined at times, it is ever present, if only as an impression.

As the Kickstarter campaign was really taking off last August, I had the opportunity to interview the guys from 44FLOOD about the project. I asked where the motivation for the subject of vampirism came from for this book. Menton3, who looks a little like a skinny version of Rasputin just without all the evil, killing and horror said…

“This is where I start sounding like an old lady with red hair who collects cats, but this is a subject that is very close to me. I have a friend who went through some insane events in his life and he was an older gentleman, he was in World War II and was not the kind of guy who would play around. He legitimately believed in something that lived for a long time. He wound up calling them vampires, but these experiences that he had floored me and some of the evidence that he had was actually fairly compelling. That’s what this is about. It is not about the Rainbow Bright version of these things. We are presenting artists saying “what if vampires were actually real, all bullshit aside, what if this was real? And in some cases it is. There are certain governments that surely look like a vampire, and treat us like a flock or like cattle. There are situations that we are put in on a daily basis, that make us feel less than human. Everyone has the right to a great life and vampirism explores the misuse of power and the things we do to each other. Comics are a great example. Coming from the music industry, I was shocked at the pretension when I would meet comic guys that had done a few issues and they would act like they were in the Rolling Stones. You give somebody a little bit of power and they misuse the crap out of it. That is a very compelling place to start with for art.”

I considered not writing a review after I got the book; after all I had met and had long discussions with the guys and like them very much. I was concerned that I would appear biased OR if I didn’t like the book how could I say bad things about it? I decided that I don’t care about either of those at this point. The book is heading out to the Kickstarter backers and will soon be available to the general public, and I wanted to get the info out there so people can make a more informed choice about dropping a huge pile of money on this book. 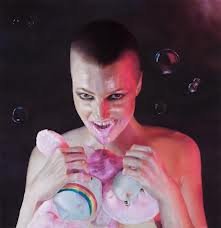 The list of contributors to this anthology is too long to try to fit in one article but it is so varied that I am confident everyone will find something to like. The book is a mix of artwork and interviews with most of the artists being interviewed by another artist or writer. The interviews are a nice change of pace from the usual cookie cutter question and answer type interview with a wide variety of formats.

The artwork is more than just drawings or paintings and while the primary focus of the collection is the visual arts there are a few prose selections and comic stories. Much of the book is understandably dark and gothic but there is some surprising humor. A bonus to the book is an audio CD of various music to accompany the book. Again, here readers will find a very eclectic mix of music to listen to and it may not appeal to everyone. I found only one track I did not enjoy in the context of this book though, and as I am an old fart that prefers classic rock, if I can enjoy it anyone can. Art and music are for me at least, a ‘feel first think second’ experience. I try to allow the more immediate visceral reaction to take hold before I really start to dig deep. TOME and the accompanying CD work well in this context as it is a very visceral book and the experience is really quite powerful.

What stands out most is the physical presence of the book itself. This thing is HUGE! The print quality is great and the paper stock used is just the perfect weight with a gloss level to make the book feel special in your hands and be very readable. The biggest drawback to the book is ALSO its size. It is difficult to sit and read this book comfortably for any length of time. My forearms got tired very quickly and I had to shift around a lot. Finding a space on the bookshelf is going to be a challenge for most people as well.

Books like this are not for everyone, but if you are a ‘big book of art’ kind of person, this may be one you want to add to your library.

Posted on Mar 15, 2013 by
Taylor Ramsey
While I quietly wait for a really good excuse to go on an interstate mayhem spree, I read comics and watch movies. While I do the "writing" here, my wife makes it readable.
Follow

Women, Culture and Politics: Buffy’s Critical Bite
Are radio edits a necessary evil or detrimental to artistic integrity?
Has destigmatizing suicide gone too far?
The Portrayal of Catfishing Within Popular Media
The History of Chinese Painting
Has Pop Music Simplified Over Time?
The Appeal of Reaction Videos