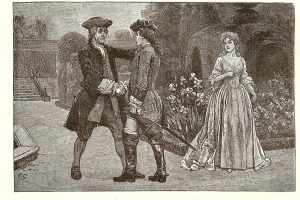 Waverley was first published in 1814. Two hundred years later, Walter Scott’s early novel remains a powerful narrative. There are three primary factors to consider when undertaking Waverley, especially the first time reading it through. First, reading Scott’s novel will help you fill your bookshelf. Readers interested in historical fiction, chivalricromance, Elizabethan drama, medieval poetry, Romantic poetry, metanarrative, folktales, satire, or irreverence and parody will find common and unfamiliar referents in Waverley. No author utilizes literary allusions quite like Scott to draw thematic and formal content for his work. Second, Waverley is recognized by many to be the first historical novel; if you are interested at all in the historical narrative genre, the controversy of its origin (why?), Scottish history, or the Jacobite rebellion of 1745, Waverley is a must read. Third, that Waverley is just funny. His quixotic idealism, the intertextual jokes, the narrator’s unbreakable anxiety over “amusing” his readers (Scott 5), all build a humorous romantic journey in an otherwise highly serious plot. Each section of general analysis that follows will offer a flash close reading of Davie Gellatly, a relatively minor character who first appears in chapter 9. Davie encapsulates much of the overarching ideas in the novel, and in writing about him I hope to avoid slipping in any hard spoilers.

Waverley is extremely funny… but be patient

Waverley is a reader’s novel. The narrator recognizes this in the funny way he begins chapter twenty-four: “Shall this be a long or a short chapter?–This is a question in which you, gentle reader, have no vote however much you may be interested in the consequences” (115). Especially for the modern reader, Waverley has the most potential to inspire laughter and learning for readers with a solid appreciation for literature and literary history. In his chapter on Edward Waverley’s education, the narrator delineates between two different types of reading:

Alas! while he was thus permitted to read only for the gratification of his amusement, he foresaw not that he was losing for ever the opportunity of acquiring habits of firm and assiduous application, of gaining the art of controlling, directing, and concentrating the powers of his mind for earnest investigation—an art far more essential than even that intimate acquaintance with classical learning which is the primary object of study. (12).

Waverley experiences both types of reading—entertainment and education—simultaneously. The narrator promises to provide this experience, and yet the first five chapters are dry and overfilled with expositionary detail. The narrator remains self-aware of this, “beg[ging] pardon, once and for all, of those readers who take up novels merely for amusement, for plaguing them so long with old-fashioned politics, and Whig and Tory, and Hanoverians and Jacobites” (24). When the plot begins, Scott initiates much of the novel’s humor. Scott creates a farce of his Davie, whom the butler describes in depth:

“He used to work a day’s turn weel enough; but he help’d Miss Rose when she was flemit with the Laird of Killancureit’s new English bull, and since that time we ca’ him Davie Do-Little; indeed we might ca’ him Davie Do-naething, for since he got that gay clothing, to please his honour and my young mistress…he has done naething but dance up and down about the toun, without doing a single turn, unless trimming the laird’s fishing-wand or busking his flies, or may-be catching a dish of trouts at an orra-time.” (40).

Let’s break that down: The butler tells us that Davie Gellatly used to work alongside him but since he saved Miss Rose from a ferocious English bulldog he received new clothes and all he does is dance around town and fish. That’s funny, but you might need to look a few things up to understand why.

Waverley is a stockpile of literary information

Walter Scott admittedly was a voracious reader, and characterizes Edward Waverley both as the Romance hero of the story and a man predominantly influenced by reading. There is something remarkably satisfying about this, about how Waverley’s existence as reader corresponds to his story’s reader. The novel gives contemporary readers an excellent bibliography to fill their reading wish lists. Included among the allusions are canonical works such as Edmund Spenser’s Faerie Queen, Shakespeare’s Twelfth Night, and Cervantes’ Don Quixote, as well as (maybe) less familiar works of Michael Drayton, Luigi Pulci, and Jean Froissart—Scott’s narrator enumerates these in his chapter on Waverley’s education. In chapter five the narrator admits connections to Cervantes insists his “intention is not to follow the steps of the inimitable author” (18). Later, as Fergus (whose friendship with Waverley is of tremendous significance) and Waverley approach the castle of Ian nan Chaistel, Fergus proclaims of their journey, “Ah, long rest to thy soul, Cervantes! without quoting thy remnants, how should I frame my language to befit romantic ears!” (121). To avoid spoiling the plot, I will only suggest that the connections between Fergus, Waverley, the narrator, the reader, and the story are deeply important.

The story introduces David Gellatly not by name but as a character “not much unlike one of Shakespeare’s roynish clowns. I am not over prudent to trust his pilotage; but wiser men have been led by fools” (39). The specific reference is to Touchstone in As You Like It, and it is a clear and important designation. From that description, an obvious literary heritage is meant to be understood, that of the Shakespearean fool.

The archetypal function of these clowns serves significant dramatic purposes on the Elizabethan stage. Like his predecessors, Davie emphasizes the thematic material in the novel; like Shakespeare’s fools, he connects more closely than perhaps anyone else in the story with the common audience; and Davie’s singing is reminiscent of Bottom in Act III of Midsummer Night’s Dream to demonstrate his courage. He sings a verse that is symmetrical, and bridled in natural language and vitality: “Where the copsewood is the greenest, / Where the fountains glisten sheenest, / Where the lady fern grows strongest, / Where the morning dew lies longest” (55).

Waverley is the first of its kind

Despite the controversy surrounding the following claim, Waverley is, as György Lukács argues in The Historical Novel, the first historical novel. Lukács describes how readers of the historical “should re-experience the social and human motives which led men to think, feel and act just as they did in historical reality” (Lukács 42), and that Scott’s novel is the first to succeed in recreating history.The novel is preoccupied from its subtitle—or,’Tis Sixty Years Since—with engendering the social and cultural circumstances of the Jacobite uprising of 1745, the division in the Waverley family because of the English Civil War of 1642-1651, and the progressivism of the Scottish Enlightenment period. As far as Scottish culture goes, Scott’s narrator offers such exaggerations of detail as the feast scene where “Lower down stood immense and clumsy joints of muttonand beef, which, but for the absence of pork, abhorred in the Highlands, resembled the rude festivity of the banquet” (Scott 96). Because Waverley precipitated the historical novel genre, it contributes again to the modern reader’s bookshelf. Works such as Dumas’ The Count of Monte Cristo (1846), Dickens’ A Tale of Two Cities (1859), Virginia Woolf’s Orlando (1928), John Barth’s The Sot-Weed Factor (1960) all owe their legacy to Scott’s imagination.

Davie Gellatly also relates to the historicity of Scott’s fictional project. The names Janet (Davie’s mother in real life and in thenovel) and David Gellatly appear in Reverend Charles Rogers’ genealogy of the Scottish Branch of the Norman House of Roger, which he wrote in 1872 while working as a historiographer to the Historical Society. According to the record, Janet Gellatly came from the “parish of Lethendy” in Perthshire, and that she gave birth to David in 1735 (Rogers 26). Thinking about Waverley’s examination of the writing of history and its consequences, another coincidental note in Rogers’ record introduces his readers to David’s half-brother, James, who served as “Historiographer to His Royal Highness the Prince of Wales” (Rogers 27). otherwise known as George William Frederick and later King George III. This tangential historical references (and without any significant material on the real David Gellatly), Walter Scott reshapes ironically the man’s history.

Waverley can be at times an uncomfortable read. Its humor is discomforting and its allusions are voluminous. Yet while the story has fallen out of favor for modern audiences it should be reconsidered. Scott’s novel contributes greatly to eighteenth century enlightenment ideas. The model of historical fiction engagessocial progressivism while accepting cultural traditions. His peasants and nobles are vividly rendered, and he undercuts the seriousness of social rebellion with a sense of comedy that fits the subject matter. Two hundred years since, Walter Scott’s Waverley deserves a revival.

Lukács, György. 1983. The History of the Novel. Translated by Hannah Mitchell and Stanley Mitchell. Lincoln: University of Nebraska.

Rogers, Charles. 1872. The Scottish Branch of the Norman House of Roger; With a Genealogical Sketch of the Family of Playfair. London: J. Rider.