Taking a break from the very important things that I do in life (like…uh…sleeping? Snacking?) I went to the cinema with my brother yesterday and let timing decide which movie we should see. We’re The Millers won out, so I wound up seeing a film that I normally would wait for on DVD. Let’s discuss how it went…

First of all, it has to be said, We’re The Millers serves up a fun premise. Jason Sudeikis’ drug-dealing David is relieved of his stash and his cash by some local low(er)lifes, and needs new product to sell ASAP. His sleazy boss (Ed Helms) sends him on a trip to Mexico to shift some weed for a big payoff, so David recruits a makeshift family made up of stripper Rose (Jennifer Aniston), sweet ignoramus Kenny (Will Poulter) and precocious street urchin Casey (Emma Roberts), in order to look as normal and non-descript as possible whilst crossing the border with a couple of tons of grass in their RV. Needless to say, antics are had, bad-guys are lampooned and testicles are bitten by large spiders, which makes for a mixed-bag of small laughs and several glances at your watch. 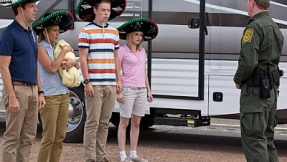 We’re The Millers opens with several Youtube clips you will have seen before (double rainbows, cute cats etc). During its runtime, this movie will constantly reassure you that, even though, you shouldn’t be using your mobile phone in the theatre, said devices still exist – and now they even star in your favourite movies! Will Poulter’s hapless Kenny is subjected to some seriously painful/embarrassing occurrences, including the aforementioned spider-bite and a show of real TLC for TLC, and “sister” Casey is always on hand with her trusty iPhone to record every painstaking moment. Even in a world where it has become commonplace to see the Apple logo plastered all over a big studio picture, the bombardment of product placement on show here is hard to ignore. I thought I’d mention this early on because, as funny as Kenny’s misadventures are, they are undercut by an unnecessary addition to the punch-line (in this case, the presence of an iPhone), and unfortunately this phenomenon happens with many of the jokes here. Keep that in mind when I tell you about the good things that happen in this film, as otherwise my review might seem a tad unfair.

The cast is certainly game, despite not looking like the ragged bunch of misfits that they are supposed to be. Surely Sudeikis is a little too clean-cut to be a pot dealer? Aniston a little too likeable to be a surly stripper? Maybe it’s just me, but it’s fortunate that the pair have plenty of charm, otherwise this could have been a real sticking point. As it stands, however, their easy chemistry and gift for saying dirty words make for an interesting dynamic, not just with one another, but with their young co-stars. Will Poulter has certainly grown up since his roles in the third Narnia instalment and Son of Rambow – he shows impressive comic timing and is easily the most likeable character of the bunch. Emma Roberts does her best with a couple of the film’s best jokes, including an anal sex joke early on that will catch you off guard. It’s one of the few unblemished jokes, so it’s to be savoured.

Let’s talk about Jennifer Aniston. This is a woman who is effortlessly comfortable with a wide range of comedy, and she does it all with genuine enthusiasm. Friends to Horrible Bosses, there’s no denying that she knows what she’s doing. The same goes for We’re The Millers. So it’s a shame that her, admittedly impressive, body seems to get more airtime than her comedic skills. The fact that a clothed picture of her in the movie took me a little while to find is testament to just how much stripping she actually does here. I mean, we know she’s a stripper, so does she really need to spend so much time in her underwear? Maybe I’m being a little cynical, but it seemed to cheapen and devalue her abilities as an actress. In the grand scheme of things, it’s a minor gripe with material that has much bigger things to gripe about.

In fairness, once We’re The Millers hits the road, the gag-rate is decent. From Sudeikis getting a little carried away in his role as fake-father to brilliant support from Nick Offerman and Kathryn Hahn as an oddball couple sharing the road with “The Millers”, the jokes are certainly there, but real big laughs are few and far between. There was one moment that really had me laughing, and that was Kenny’s “kissing practice” with his “mother” and “sister”, which is discovered by an unwitting third party. It’s a wonderful moment of stupidity and timing, as well as being the only gag that is improved by someone (“Dad”) recording the whole thing on his phone.

Unfortunately, the third act sags somewhat. Mark L. Young’s small role as a street-slanging, semi-love interest for Casey is a bright spot in a half hour in which Jason Sudeikis sarcastically uses the term YOLO to cringe-worthy effect. We also get the obligatory redemption of our arsehole protagonist who, if it weren’t for Sudeikis’ innate charm, could have been the least likeable character in the film. It’s in this very act that you’ll find yourself wondering why in the hell this film couldn’t have finished 20 minutes earlier.

Some harsher trimming in the editing suite would have done a huge favour for We’re The Millers, and there’s far too much in the way of product placement and pop song cuts here for the film to feel as effortlessly enjoyable as it should have felt. However, if you’ve a strong stomach for commercialism and Apple, there’s a good time to be had here.

Posted on Sep 4, 2013 by
David Tatlow
You can call me Tatt. I like all kinds of films, as well as talking to/boring people about them at great length, so brace yourself.
Follow