In the Wake of Khan: Why Star Trek Into Darkness Fans Should Consider Star Trek: TOS

When Star Trek first began its original run in 1966, for many, it was a symbol of an oncoming new era. During a time when cultural perceptions had been wholly influenced by the ever looming iron curtain, and news of a potential nuclear war threatened any hope for societal progression, Gene Roddenberry’s vision of the 23rd century grew into a beacon of hope that not only promised a future where humanity survived and travelled the stars, but did so with a curiosity and openness that left no room for petty conflict.

Since then, despite undergoing a final cancellation that could not be saved by fan campaigns or the great Lucille Ball, Star Trek has survived and even grown into a cultural behemoth that is endlessly referenced, critiqued, and debated. Holding the Guinness Book of World Records title for most spin-offs in TV history, there are very few other fictional titles that can boast the same breadth of cultural influence and timeless relevance. Yet, even with a devoted fanbase that has become largely self-sufficient in their endless creation of sub-cultures, languages, and fan series, the franchise seems to have experienced a sharp decline in public interest over the years. The reasoning, of course, is debatable. Although some would argue that the series has simply become exhausted after so many years on air, others would point to an overt move away from Roddenberry’s vision that has affected overall quality. Perhaps the true answer lies somewhere in the middle.

Nevertheless, the release of J.J Abrams’ re-envisioning of the Star Trek universe in 2009 was met with critical acclaim and a collective woop of excitement as he successfully introduced a Star Trek that was far more accessible and appealing to an uninitiated audience. While this was achieved through a heavier reliance on action and ‘make it up as you go along’ storytelling, the combination of sleek visuals and unexpected twists undoubtedly gave the series a greater staying power than other recent attempts had managed to accomplish.

It certainly can’t be denied, however, that the most recent instalments are far removed from where the series started out nearly fifty years ago. While they succeed as entertaining introductions to the series, and provide ample opportunity for older fans to bask in nostalgia, many would argue that the heart and soul of Roddenberry’s original vision just isn’t there. Lost in between breathtaking action sequences and throwaway references to Klingons are intricate alien cultures, an ever expanding sense of history, and moral discoveries that writers and fans have made together throughout its existence. While new fans may initially be quick to brush The Original Series, and its follow-ups, aside for their dated graphics, slower plotting, and (only sometimes) hammy acting, by doing so, they’re missing out on what is ultimately an unforgettable space adventure that is still capable of captivating fans, new and old.

A Wagon Train to the Stars

As a series meant to fuse the very best of science fiction and western storytelling, adventure and exploration are the driving forces behind many of the crew’s missions. While the stated purpose of the Enterprise is to seek out new life and perform acts of diplomacy, without fail, the crew still manages to find their survival threatened on a nearly weekly basis. This results in a well balanced combination of action and peaceful discussion that allows the crew to maintain their prime directive without sacrificing the need for plot-based conflict. Drawing on the talents of many well known genre fiction writers of the time, such as Richard Matheson (I Am Legend), Robert Bloch (Psycho), and George Clayton Johnson (The Twilight Zone), Gene Roddenberry went on to produce a number of episodes that incorporated commentary on several key political and social problems of the day, as well as a mix of moral dilemmas that fully utilized the series’ setting in space. As there were very few series at the time that were willing to target adult audiences and offer plot lines of a more serious nature, it soon became apparent that the series had a much heavier influence over viewers than originally suspected.

That shouldn’t leave you with the impression that The Original Series is one merely suited for its own time period, however. Among the episodes are a number that easily stand alone as perfectly fine tales of science fiction. Fan favourites include The City on the Edge of Forever, which won a Hugo award and introduces the crew to the dangers of time travel, The Enemy Within, in which Kirk is split into two opposing good and evil versions of himself, and The Balance of Terror, which is the first episode to introduce the Romulans and explore the Cold War through metaphor. While some of the plots may be recognizable to viewers of this day and age, as they’re ones that have been recycled numerous times through countless mediums, the quality of writing in these episodes remains very strong.

Of course, it’s also my duty to warn you that Star Trek does have its fair share of campy storylines and unintentional humour. Not all episodes can be considered great. In this instance, I turn you to the episodes Spock’s Brain and The Trouble with Tribbles. While the latter is another fan favourite that involves the infestation of the Enterprise by one particular fluff ball of a creature that Star Trek Into Darkness fans will definitely recognize, the former is one that is collectively remembered by fans and cast members alike as probably the worst episode Star Trek ever produced. As the name suggests, it involves an incident in which Spock’s brain is stolen by an alien life form and the crew’s attempts to retrieve it before Spock’s body dies. Now, I personally find the term “worst” subjective. Is it terrible? Sure. But is it entertaining? Oh my goodness, yes!

Given the ongoing fears of cancellation and budget cuts that repeatedly threatened the series’ success, there are several instances where you’ll most definitely feel yourself being slapped in the face by the series’ 1960’s production values. While the recent release of the re-mastered editions have gone a long way in improving some of the more technical effects, and I would recommend giving them a watch, there’s really only so much that could be done. But don’t let that deter you. The locales are very obviously made from set stages. The backgrounds are nothing more than giant paintings. But we also get a taste of such joys as…

Sulu’s beloved plant, with five moving digits and all.

A special appearance by Lincoln, himself.

And this little guy.

These are truly artifacts from a time that we’ll never experience again, folks.

More Than a Space Opera

It may be difficult for some, but if you can look past the obviously glued together sets and less than terrifying creatures, you’ll find that Star Trek has a lot more to offer underneath. As I continue to make my way through a second viewing of The Original Series, I find myself still very impressed by the careful world building and thoughtful character development delivered in most episodes. Although the series is fairly episodic, and is produced in a way that is easy for new viewers to pick up at any point, its recurring themes and repeated allusions to certain character traits aid in the creation of a narrative structure that feels continuous despite its lack of story arcs. With each new planet and visitor to the Enterprise, little tidbits of info on the surrounding universe and the cultures therein are provided for the notice of attentive viewers. Over time, as we’re allowed greater glimpses into the world Roddenberry has created, viewers can expect to see the beginnings of plots and details that will later go on to define the Star Trek franchise as a whole.

The three characters to receive the most attention, of course, are Captain Kirk, Mr. Spock, and Dr. Leonard McCoy. While the other crew members are given enough moments to endear them to fans, their roles prove fairly minor when compared to the ones upheld by these three specifically. With Kirk as the determined and courageous leader, Spock filling the role of counsellor, and McCoy upholding the moral compass that the other two sometimes overlook, their interaction as a unit goes a long way in not only imbuing the series with a more genuine, human quality, but also in uncovering their specific vulnerabilities as they play off one another. For example, unlike Zachary Quinto’s Spock, the issue of Vulcans and their ability to experience emotion is not immediately explained. Like many other aspects of the series, it is only teased at during moments of weakness or when the history of Vulcan is being discussed. Only after some time has been spent watching Spock struggle with his human half do we eventually come to a better understanding of Vulcan ideology and Spock, himself. Details of McCoy’s time at Starfleet and the experiences that have shaped Kirk’s views as a Captain are similarly only uncovered over time. After following the crew through three seasons and six movies, I’ve found that the close attention to detail makes for a very satisfying watch as it eventually goes on to end on a particularly high note. 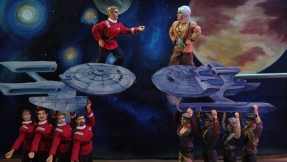 “Course heading, Captain?”
“Second star to the right and straight on till morning.”

Even to this day, Star Trek remains a highly influential and integrated piece of popular culture. References and call backs have seeped into nearly everything, from skits and one off parody episodes, to music and academics. It’s been cited by many in the science field as a series that’s played a powerful role in inspiring their life-long passion for discovery, and is often remembered fondly for its cultivation of the belief that humanity is capable of anything. While I only touch on The Original Series in this article, it must be remembered that it is only the first act to what is a long and colourful history of new ideas and interpretations of the future. It’s certainly not perfect, and much of what it introduces is only refined as the franchise expands, but the mix of humour and creative storytelling do well to ensure that the series doesn’t merely fall into the shadow of its successors.

As Star Trek Into Darkness continues to garner mixed reviews, and seasoned Trek fans await the day that a new series is announced, new fans needn’t wait another four years to experience more of this vast universe.

Posted on Jun 11, 2013 by
Jessica Koroll
An English student with a taste for the surreal and love for all things science fiction, her thoughts generally linger on Star Trek, lit theory, and recent tv episodes.
Follow