This year, many people have complained about Hollywood’s (apparently) brainless assortment of big-budget blockbusters. From April’s Tom Cruise action flick Oblivion to July’s X-men instalment The Wolverine, audiences and critics have blamed one blockbuster after another for the apparent death of cinema. In this time of fiery internet comment sections and one analytic article after another (not too dissimilar to this one), we have been trained to look down upon anything that aims to entertain the masses. I, however, believe that this is has been a good year for movies. Man of Steel and Iron Man 3 become gloriously fun movies while Pacific Rim proved that audiences love creatively intense monster mashes. As I am someone to give credit where credit is due, I looked back on 2013’s crop of Hollywood fare to dissect and reveal some of this year’s best cinematic moments.

At the beginning of the year, everyone expected Brad Pitt’s expensive zombie flick to be a bigger cinematic bomb than Battleship (or any other generic disaster flick of its type). Plagued with expensive production issues over its two year run, everyone expected it to be buried under a wave of superhero flicks and other apocalyptic action flicks. Thankfully, it ended up being a enjoyable, pacy and visceral thrill-ride. Pitt proved he could still lead a big-budget romp and zombies were revealed as one of this year’s greatest movie/TV antagonists (as well as the flavour of the month). During the first set-piece, in which Philadelphia is over-run by the undead, the movie pauses and depicts one man’s transition from human to zombie. Thanks to Pitt’s character’s cunning intellect, and a children’s toy, the film counts down from 12 to 1. during this countdown, the man is bitten, collapses, writhes around on the street before clumsily rising and joining the zombie horde. It’s a tight, tense and brutal few seconds in which a connection between the outbreak and the world-scale implications is established. We may have only seen one person turning into a zombie, but we understand just how vicious this disease can be.

Making a sequel to a beloved reboot wasn’t going to be an easy task. Thankfully, JJ Abrams and co. pulled it off with style and panache. The sequel, Star Trek into Darkness, is a fun, character-driven Star Trek film that is also filled with relentless action set-pieces. However, the best scene doesn’t involve phasers, battleships, or foot chases (although there’s still plenty of that to be had). It involves, arguably, the best villain of many big-budget 2013 movie (so far). Throughout the movie, John Harrison (Sherlock‘s Benedict Cumberbatch) is presented as a carnage-inducing yet sympathetic freedom fighter. His actions may draw similarities to terrorist attacks committed over the last decade, but we find out why he commits such atrocities. The best scene illustrates just how far he is willing to go to save his race. Taking over the enemy ship, Harrison betrays Captain Kirk, breaks Dr. Carol Marcus’ leg and crushes the bad guy(Admiral Marcus)’s head with his bare hands. Carol’s scream, at the sight of her father being brutally murdered, says everything you need to know about this all-important scene. In it, the crunching sound effects, the star-making performances, and climactic score build to this terrifying crescendo. Also, if every movie lived by the phrase: “a movie is only as good as its villain”, than Star Trek into Darkness would be an instant classic among Trekkies. 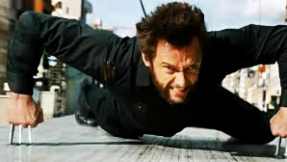 In James Mangold’s action-drama The Wolverine, we see a titular character whom doesn’t want to be noticed or relied upon. Forced to travel to Japan to say goodbye to an old friend, Hugh Jackman’s most influential, and most popular, character Logan/Wolverine will face his internal demons whilst coming across Yakuza thugs, assassins, ninjas, and…giant samurai robots (admittedly, the movie’s weakest aspect). The tightly shot and edited action set-pieces are thrilling to watch and carry emotional weight (so rare to see one film with both elements). In The Wolverine, we see three fights occur one after the other. After a hack-and-slash-a-thon that puts the ‘fun’ in ‘funeral’ and a foot chase through Tokyo’s dirty yet brightly coloured streets, Logan and Mariko (his love interest) end up on a bullet train. Just when you think the movie will catch its breath and return to the character/story building elements, four assassins descend upon the two fugitives. The bullet train sequence, both the tension-inducing lead up and the heart-thumping train-top sequence condense many thrills into a few minutes. This sequence, in which Wolverine must kick assassins off the train to their deaths, is a nail-biting sequence that tests the bonds of stunt-work and CGI. Here, we see Wolverine’s fury in full view as he lunges towards his targets. With each stab into the train top, Wolverine and the assassins hold on for dear life whilst continuing their quests. 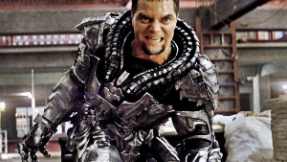 Man of Steel is one of this year’s most polarising movies. Featuring many ‘alien’ characters and a large amount of collateral damage, the movie reached out to superhero-action film fans but may have left the Superman aficionados at the door. Here, we see a much darker, existentially distraught hero who doesn’t know what to do. There are many jaw-dropping scenes in this controversial movie. One of which is the final fight between Superman and General Zod. Both featuring superpowers when situated on Earth, the final battle is an exhaustive and enthralling few minutes. We see two super-powered men smacking each other and throwing each other through buildings in stylish and cohesive way. This sequence may seem conventional, but one moment, in which Zod strips his armour off to reveal his natural body structure, is an awe-inspiring yet efficient revelation. The end of this set-piece is also startlingly effective. Superman’s actions in this sequence craft the seemingly weakened Kryptonian into a powerful saviour of Earth. 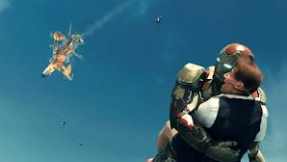 Iron Man 3 contains many scenes/nuances you wouldn’t see in any other superhero movie. Following on from The Avengers, Iron Man 3 had a mountain to climb in order to reach the ridiculous audience expectations it had received. Here, we see a side of Tony Stark that the other movies have only lightly hinted at. In this movie, he is a damaged soul who is willing to save everyone to prove he’s made of much more than just iron. The nuances carry through to the action set-pieces. In them, Tony Stark uses his intelligence and guile to wiggle out of multiple life-threatening situations. The film’s best set-piece, by far, is the skydiving sequence. Tony Stark, here, proves he, despite only being one man in a can, can save multiple lives in impressive ways whilst being in two places at once. The technical aspects of this sequence are also astounding. Performed by the Red-Bull skydiving team, this skydive is expertly choreographed and thrilling from beginning to end. Director Shane Black, as welcome addition to this franchise, is able to capture certain focused and unique shots that others would find impossible to grasp. 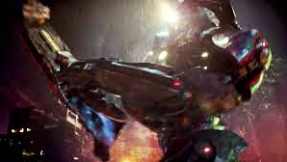 Featuring giant robots and monsters engaged in a super-up version of Rock ’em Sock ’em Robots, Pacific Rim is, of course, popular due to its fun and outlandish premise and visuals. Director Guillermo Del Toro is clearly a fan of Japanese Kaiju movies and anime. So much so that there are many references and ideas alluding to famous examples of the two aforementioned genres. Here, one action set-piece rumbles and roars like no other. Featuring skyscraper-tall creations, the Hong Kong smack-down stands out as being an expansive and creative set-piece that lets the viewer know just how important battles like these are to the overall narrative. Here, a battle breaks out between a Jaeger (giant robots piloted by the lead characters) and a creepy, crawly Kaiju. The Kaiju waltz’s into the city. Before it can cause mass destruction, the Jaeger walks into the city whilst carrying a cargo ship. The Jaeger uses the ship as a baseball bat, laying down some powerful attacks onto the confused creature. This sequence illustrates the scale and inventiveness on display throughout the film. We see the jaegers using anything at their disposal throughout the Pacific Ocean to destroy these gigantic beasts. Yes, there’s an extraneous amount of collateral damage, but every inch of celluloid is beautiful, detailed, and awe-inspiring.

Hopefully, this list has proven that this year’s big-budget movies contain many inventive and awe-inspiring moments. The up-coming prestige film season may eclipse this year’s blockbuster movie season, but these big-budget extravaganzas still have their commendable and important aspects that separate them from blockbusters of any other year or generation.