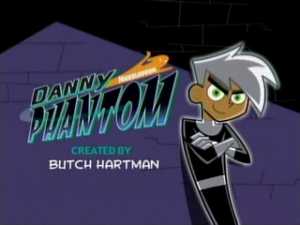 The hit Nickelodeon show Danny Phantom ran from 2004 to 2007, making up three season and 53 episodes. The series depicted the adventures and exploits of Danny Fenton and his alter-ego Danny Phantom, a half-human half-ghost who made it his job to protect the citizens of Amity Park. The series didn’t win any awards or gain any accolades, but it holds a very dear fan base, and is uniquely the only real Motion Comic ever produced. A Motion Comic is a comic book brought to life through animation and voice acting, but still remains very comic book-like using panels and visible sound effects and visual gags.

Danny Phantom is very much a teenage superhero show. Butch Hartman, the creator and executive producer, could have easily made Danny more monstrous, making a tormented soul/horror show, or even gone straight with Danny Fenton being a motorcycle riding ghost hunter like he originally intended. Instead, he chose the superhero route. Within the genre he created a very superheroic tale through Danny and his exploits as the Halfa, building the character of Danny Phantom from ground up as an inexperienced and naïve teenager with limited control over his powers to a hero that even ghosts eventually, grudgingly respect. 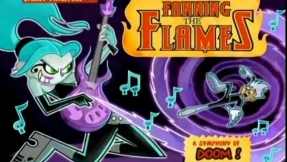 Danny Phantom utilized title cards to reveal the name of the episode and gave you a hint of what was to come. This is very similar to what actual comic books do with their covers. It has the name of the series, possibly the name of the arc, who wrote it and penciled it (in the show’s case it was the directors, writers, and executive producers), and an image depicting what was inside. Very rarely do the covers depict an actual scene so much as a glimpse of the book itself. Danny Phantom did this, with Danny and that episode’s enemy either duking it out or the enemy exacting some torment on Danny. The only time a title card wasn’t used was on the series finale “Phantom Planet.” 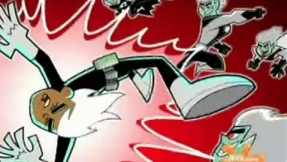 Danny Phantom also used still images during fight scenes as a great advantage. Though this might have stemmed from lack of funding for animation, they made the stills into something that would tone down the brutality of the violence, yet remain humorous, as they usually depicted the moment when Danny Phantom was finally able to get the upper hand on his opponents. This use of stills is reminiscent of actual comic book panels where the superhero fights the super villains.

The overall arc of Danny Phantom is very comic book-like, drawing particularly from Spider-Man. Danny Fenton was your average 14-year-old teenager with ghost-hunting parents and a neurotic older sister. On a dare, he steps into the inactive ghost portal, turns it on by accident, and it zaps ghost DNA over his own, giving him the ability to become Danny Phantom. From then on he decides to become a superhero and protect Amity Park, his hometown, from any ghost menace that happens to pop up that week. Each season had a rough arc, but mostly the episodes stood alone quite well. 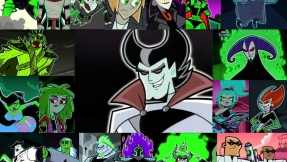 Danny Phantom had archenemies and recurring villains. The first half of the first season introduced ten unique villains that would all go on to play larger roles as nemeses of Danny Phantom, with new ghosts popping up to give Danny a hard time and spice up the story. Danny also had an archenemy in Vlad Masters, and his ghost alter ego Vlad Plasmius. As the seasons went on, Vlad would play a larger and larger role until the third season where Vlad become a mainstay of the series. However, all Danny’s villains were specifically unique, ranging from Skulker, the greatest hunter in the Ghost Zone, to the dimwitted Box Ghost, who every fan loves simply for when he
yelled, “I am the Box Ghost. Beware!” However, ghosts were not always the enemies as Valerie Grey was introduced as the Ghost Hunter, sporting a Boba Fett-like look and gear and who really just wanted to kill Danny Phantom. 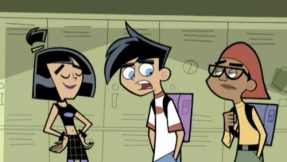 Danny also had a large team of allies at his disposal. At the beginning of the series, the only people that knew his secret identity were his best friends Tucker Foley and Samantha “Sam” Manson. Like any good superhero story, there was also friction between Tucker and Sam, and Danny was the odd glue that kept them together. As the series progressed, Danny’s older sister Jaz was added into the mix, even though she learned of her brother’s secret identity early on in the first season. Danny’s rough army would later include escaped ghost prisoner Wulf, leader of the Ice Ghosts, Frostbite, the time traveling ghost Clockwork, and Danny’s female clone Dani Phantom.

Danny Phantom also supported an odd assortment of side characters such as Danny’s parents, Maddie and Jack Fenton, the local ghost hunters who were totally oblivious to Danny’s identity as Danny Phantom. That is a classic comic book foil as it drove Danny to become a better hero, even though his parents were always trying to catch and dissect him, and added to the humor. Mr. Lancer would become a kind of mentor to Danny, giving out sage advice at odd moments and guiding Danny towards a brighter future. When everything was going wrong, Mr. Lancer would randomly yell the title of a piece of literature, like, “Paradise Lost,” in the pilot episode when all the meat at the faculty buffet disappeared.

Of course, it wouldn’t be a tormented teen superhero drama without the obnoxious football player and his gang of “popular” people. Dash and Paulina made up most of the human tormentors of Danny Fenton, though Danny had a steady crush on Paulina for most of the series that would occasionally fluxuate to Valerie Grey and Sam Manson. Danny was not rich or athletic, and his parents were the local loons, so popularity never reached Danny easily.

All of this would wound up bottled into a unique story about a half-ghost half-human character that also happened to be a superhero. All the classic elements of comics are there, and the use of cover photos, stills, and visual gags make it a motion comic. Danny Phantom is fun and thoroughly entertaining and the fact that is actually a motion comic makes it all that more unique.

Posted on Feb 12, 2015 by
Ian Terry
I am a junior contributor to the Artifice. I enjoy Anime, Manga, Comics, and really anything that is just awesome.
Edited by Amanda Dominguez-Chio, Mary Awad, wierdbuthatsok.
Follow

Should Children’s Films be Dark or Light?
The “Actual” meaning of Encanto
The Appeal of the female characters in Arcane: League of Legends
The nature of Self in Centaurworld
Steven Universe and Fascism
Disney’s Live Action Remakes: Who are they for?
Children’s Animation and “Bad Behavior”