Elder Scrolls Online: The Game To Turn Them All… Away

Gaming company Bethesda have recently been updating audiences on their latest major venture, Elder Scrolls Online. The online multi-player version of the Elder Scrolls series, which encompasses popular titles such as Skyrim and Oblivion, has been eagerly awaited by many gamers for many, many months, with the games genesis being 5 years prior to its formal announcement in May 2012. However, as more details surface about the game, due for release in spring 2014, it seems that previous fans are becoming less and less enthused with Elder Scrolls Online. 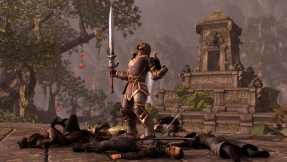 The storyline of Elder Scrolls Online is said to be set 1000 years before the events of previous game Skyrim, and shows Daedric Prince Molag Bal as the main antagonist for the games events. From the characters previous appearance in Elder Scrolls games, many people are suggesting this will provide a dominant theme of vampires and demons, alongside the presence of dragons, similar to the events of Skyrim. The game is currently in Beta, with an invited selection of users currently testing the available quests and massive online factions, which battle for the title for the Emperor of Tamriel. For those less well versed in Elder Scrolls terminology, Tamriel is the world, Skyrim and Oblivion continents within it, and Deadric Princes the Gods worshipped by various characters in Tamriel. It is perhaps easy to see why Elder Scrolls has become such an all-encompassing and complex series.

On the surface there is much excitement for the release of Elder Scrolls Online, with its availability on Xbox One, Playstation 4, PC and Mac meaning that gamers can connect up and play with their friends regardless of console. However there is a limit to this, as it has been revealed that computer users will be hosted on a separate set of servers to games console users.

This restriction is coming as a minor setback for players compared to the business side to Elder Scrolls Online. It has been confirmed that the online game will work on a monthly subscription basis, at a chunky cost of £9.14 a month. Whilst this is not a final pricing on the game, it comes as quite a disappointment to Elder Scrolls fans. The single-player game Skyrim had a retail price of £30 on PC and £45 on Xbox when it was first released, so when compared with Elder Scrolls Online, users would pay a similar amount in just over 3 months for the privilege of playing with your friends. Not only is the monthly subscription, allocated for the cost of running servers and adding new content, over-priced, but to initially buy the game costs a ridiculous £37: More than the cost of the entire single-player Skyrim game. 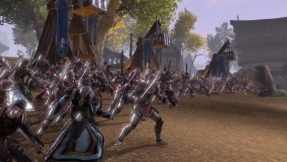 Many fans of the Elder Scrolls series have been surprised and upset by the decision to make the game subscription based, as this proves a very expensive game in the long run, not to mention any possible perks and extra content which could cost users more to simply keep up with other players. Again whilst Bethesda have assured players that the subscription based payment will allow for new content every 4-6 weeks, the closed Beta has left many gamers in the dark and questioning if Elder Scrolls Online will be worth their money, and whether the creators have gotten a bit too interested in the contents of their PayPal.

A simple and widely accepted way to solve this would have been to make an open Beta, so that everyone can have a chance to try before they eventually buy. To be invited to test the close Beta of Elder Scrolls Online, applicants had to complete and questionnaire, which included questions on factions for other games, implying a change in target audience compared with previous Elder Scrolls games. This could also be connected with the inclusion of subscription fees, as players who are heavily invested in massive online games are more likely to accept the monthly fees than gamers who play games with just a fee for the game, which includes players of all the previous Elder Scrolls releases. Similar online games such as League of Legends have trialed similar prices to the ones proposed in Elder Scrolls Online in the past, but all have failed to keep a consistent amount of players, with the exception of World of Warcraft.

Another option to entice players would have been to make Elder Scrolls Online free-to-play, but employ micro-transactions; payments for perks and special content which users choose to invest in. Elder Scrolls already has a huge fan-base, and many thought that Bethesda would realise this and choose to make a free-to-play game, as an online version has been begged for years. The game series has already proved a very profitable venture, with over 11 million units of the Skyrim game, and over 4 million copies of it’s predecessor, Oblivion.

Whilst Elder Scrolls Online still has a few months before the anticipated release, it seems the creators have been the bearer of disappointing news to their longstanding fans. With a current lack of appeal for the game, apart from showing your friends your house or the funny half-frozen mammoth you found, as well as the format which caters to players who are more experienced in the field of massive multi-player online games, rather than a large portion of Elder Scrolls users who favour the single-player offline format. The lack of emotion and awareness from Bethesda towards their fans has made Elder Scrolls Online a major unreleased blunder, disengaging the very target audience that made the Elder Scrolls such a success for nearly 20 years. With many fans not sticking around to see if it’s worth it.

Posted on Nov 27, 2013 by
Louise Egan
Writing most fervidly about film, animation, comics and games, but you'll get articles on almost anything if it catches my eye. Not afraid to criticise as well as champion.
Follow