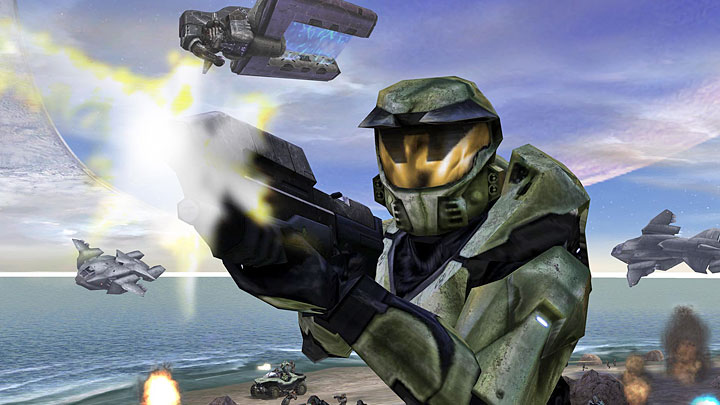 Gregorian chanting. Immense superstructures drifting in the void of space. An emerald warrior and his azure pretty-naked super-computer companion battling not only a vast alien hegemony determined to wipe out humanity, but also fighting the good fight against an unsightly ancient, all-consuming galactic parasite with many faces, none of which any mother could even consider loving.

This is Halo. Or at least, a very small part of it.

Quick tutorial for those who have no idea what the above lines mean: The Halo Series is a First Person Shooter Video Game Franchise that follows the Master Chief, a genetically and cybernetically-augmented super soldier whose sole purpose in life is to fight and win every battle he can against the theocratic, xenophobic alien hegemony known as the Covenant Empire, or simply the Covenant. Following a Covenant ambush in the beginning of the first game, Chief crash-lands on an alien superstructure known as Halo, a beautiful but deadly weapon capable of unprecedented destruction on a galactic scale. A weapon that not only predates both the Covenant and Human civilizations, but a weapon that both will seek to control, even if it ensures their own destruction.

For over a decade, the Halo Franchise has been wowing audiences with its fluid gameplay, solid design, and deep—talking Marianas Trench deep—lore, most of which remains a mystery. Or, at least, it did, up until the release of Halo 4. Things started to change after Halo 4. More and more of the complex story behind Halo was revealed. Characters, locations, events of the universe’s past, and more poured out like water from a busted Dutch Dam. For years, it seemed Bungie Studios had been the little Dutch Boy keeping his finger in the hole of the Dam. They parceled out bits of story through tie-in novels, comics, and, nominally, the games themselves. Their successor, 343 Industries changed that, however. They took the finger away from the Dam, and now there’s water everywhere.

So is that a bad thing?

Arguably, yes. One of Halo’s biggest draws was the mystery behind the series. How did the Halos—massive mega-weapons capable of eliminating all life in the galaxy—come into existence, really? Where did the Forerunners—the builders of both the Halos and their own demise—come from? No matter who played Halo, it’s obvious that everyone must have been curious about something. Whether one slogged through pools of alien guts in the Campaign or duked it out and slogged through their friends’ guts in the multiplayer, one couldn’t help but stop for a moment, just a moment, look around, and wonder.

That right there is a core component of game’s fun. Bouncing around in power armor as one explores lush environments, not only in terms of aesthetic, but in terms of history and story. Each locale is inspiring, sometimes even moving. An entire art form was raised partially by Halo–Machinima, the art of telling a story through a video game, spawning not only one of the longest-running web series of all time–Red Vs. Blue–but also lighting the spark for numerous other fans to create mountains of content, all of which took the simplistic setting of Halo and modified it by infusing their own creativity, their own stories, their own worlds, into this simple game. The fan-base was often united through these acts, and the movement to create more and more grew exponentially, arguably hitting its peak with Halo 3, where many fans will agree the community produced some of the best Halo-generated content in series’ history.

Those days, however, may be over. The past two Halo games—both manned by 343 Industries—have gone far deeper into the backstory of the lore than any Halo game before them. Granted, there are still tie-in novels and comic books and the like, but never before has the series dumped this much lore on the vessel for its casual fan-base. And while fanatics may revel in this downpour of Halo-centric fiction, one has to take note that the majority of fans may not be experiencing the same onanistic vibes.

A big draw of the series was that the games were relatively simplistic. Yes, the lore was/is rich and complex, yes knowing said lore could bolster one’s experience, but not everyone is that invested in the series to care on a repeat basis. Some simply want to pick up, play for an hour or so, and then move on. This task is rendered much more difficult in the past two Halo games, as the story requires more attention, more focus, and more knowledge in general of the prior games’ lore. Of course, it isn’t a bad thing to include more story in one’s games, but when that story begins to dilute and hinder the purpose of the games–to have pure and simple fun–a reexamination of one’s methods may be in order.

And that’s the issue with newer Halo titles—namely Halo 4 and Halo 5. The inclusion of such a vast amount of lore–on top of burdening the fun–makes the game difficult to enjoy without feeling as though one is missing out. Including characters and locales from tie-in novels is an interesting concept in theory, and it’s a great way to attempt a much larger scope of story across multiple platforms while also providing a unique experience for the fan-base; but that’s assuming that a large portion of the fan-base will actually go out of their way to actively seek items of story that cost money other than the actual game. This oversight has lead to a falling-out between casual fans and Halo, and it’s fairly self-explanatory as to why. It’s easy to get lost within the jungle of the Halo Mythos, and many players purely don’t have the time, energy, capital, or patience to hack their way through such a dense underbrush of story.

Unfortunately, this contagion of over-abundance in games doesn’t seem to be contained solely to Microsoft’s Flagship Franchise. Yet another mega-franchise is at fault for spoon-feeding its audience–Pokemon. With the advent of the 3D modeling for characters in Pokemon Black and White, the series officially eschewed its trademark sprite-figures and hopped feet-first into an all-3D world. Which is fantastic–many players had only dreamed of being able to see their Pokemon in the games as not just 2D sprites, but fully-realized 3D figures. One has to wonder, however, is that the best for the series? Part of the fun of the older Pokemon games was filling in the gaps, plugging in what one thought their Pokemon’s attacks would look like, using one’s imagination to make the diorama-esque towns and villages of the Pokemon World come to life. Now that’s been partially taken away, and while it may not be spoon-feeding lore to an audience, per se, it still has the same effect. It removes the mystery surrounding the world the player inhabits, which only serves to alienate the player as he or she feels less invested in a world that is less their own.

This article is not at all written to slight 343 Industries. For all intents and purposes, the company is still new. They’re a former branch of Bungie that is still learning how to wield the power they’ve been gifted, and that takes time. Alongside that, they’ve been able to produce quite a lot of enjoyable content for hardcore fans alongside the Halo games, such as the episodic series Forward Unto Dawn and an anthology of anime-style shorts Halo Legends. Both of these were rich, engaging visual experiences that not only played within the universe of Halo, but developed it, fleshed it out, made it just a bit more capturing and fantastic. Therefore and because of this, it is certainly within 343’s potential to make a truly great game. But with the constant infusion of gallons of lore into each title, the company may not only be drowning its players in an endless and unnavigable sea, it may be losing sight of the shore, soon never to return.