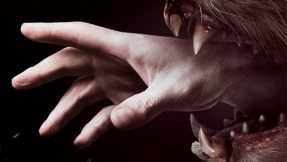 Hemlock Grove producer Eli Roth knows his horror, so it’s safe to expect that this show would significantly draw from the genre. Even before the opening credits we’re treated to a mini flick in itself: a young girl running through the woods from an unseen threat with shaky point of view camera shots intercut with her terrified face. This is a horror staple that sets the mood for what to expect from this show, but it’s not the only cliché – and not just from horror – that we’re treated to in these introductory few scenes. Presenting, the top five tropes in the first five minutes of Hemlock Grove.

5. Everyone is an Idiot

See: every horror film ever 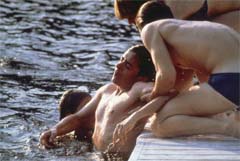 In the majority of horror films and television every character must have a slightly diminished IQ for plot turns to commence. For instance, everybody in Friday 13th (and the sequels) repeatedly returns to Camp Crystal Lake when they all know that every time anybody goes there it’s a bloodbath, whilst in Scream Rose McGowan decides a cat flap is a sensible way to escape.

Brooke’s car is attacked by an unknown force after she stops at a rail crossing. The train has passed and the barriers are up, yet instead of speeding off into the night she opens the car door and runs screaming into, of all the places, the dark and isolated woods. Brooke may have survived had she floored the accelerator, but instead opted to leave her defensive position, essentially shouting “Yoohoo! Over here!” to all the creatures of the night. Without these seemingly idiotic decisions, the majority of horror films couldn’t come to fruition. This breed of foolishness is not the only horror-specific trope Hemlock Grove implements to make her fail as…

4. Women lose the ability to run in a crisis

See: Scream, Texas Chainsaw Massacre…a large proportion of slasher films
Despite horror films generally allowing a Final Girl to survive whatever trials and tribulations that may exist in their sphere, women tend be terrible at escaping. Whether it’s high heels, restrictive clothing, or perhaps horror directors just aren’t aware that women have the same capacity to run as men. Their baffling inability to stay upright has even been parodied in Scary Movie. The film’s introduction mimics Scream almost scene for scene, demonstrating the absurdity of the female victim’s repeated tumbles during a chase.

Women often tend to fall over for no reason at the most critical points, and the opening scenes to Hemlock Grove is no exception. Brooke opens the door of her car and falls straight out of it. During her ill-advised escape through the woods she crawls through the undergrowth almost more than she runs. The camera switches to a point-of-view shot of her hands on the ground accentuating her hopeless getaway, yet it’s clearly not vegetation tripping her as she gets to the sports field and repeatedly slips over on the flat grass. Unfortunately for Brooke she is not only terrible at running, but her hiding skills lack finesse too. She decides upon a miniature wooden house with one doorway and no door meaning that not only is she still exposed to her attacker, but she’s made damn sure that she has no escape either.

3. Rich kid has problems despite being rich

Not particularly a horror film motif, weird, love-starved, rich kids transcend genre and can be found anywhere from sitcoms to heavy dramas. In comedy their horrible but privileged upbringing is a source of bittersweet comedy, such as Chandler from Friends and Eliot from Scrubs. Both these characters spin amusing stories of having their emotional development taken care of by the “help” whilst one (or both) of their parents screw the pool boy. On the more serious side, the extreme example is without a doubt American Psycho. Patrick Bateman may have it all financially: a house in the Hamptons, fabulous suits, and outlandish meals from any restaurant in Manhattan. Despite this he is not happy without a daily cocktail of drugs and several dead prostitutes littering his beautiful home.

We meet Roman having sex with an attractive prostitute. Use of prostitutes is often used as a signal that the punter has emotional issues. Sofia Coppola especially uses this device of taking her main characters to a strip club in order to accentuate their feeling of being disconnected along with miscellaneous angst. This is more pronounced if they’re physically attractive so, as the show cast a Skarsgård, it’s safe to say he’s troubled. Roman uses her services in the back of what is obviously his car. This red convertible tells the audience his high social status immediately, as a teenager with such a flashy car should really be seen as a rarity.

It’s getting hot and heavy when Roman holds a razor blade threateningly behind her, invoking images of Patrick Bateman, before slicing into his own thumb and rubbing his blood into her shoulder. She calls him kinky and then refers to him by name, which he instantly objects to. This suggests he is ashamed of his actions, especially when he overpays her to the point that she protests to make sure that she does not, or will not, admit to know his name.

2. Teacher and student have lesbian affair

Whilst there isn’t an immediately explicit lesbian affair between Brooke and her teacher Banksy, one is heavily suggested with intellectual teasing, a secret meeting, and a heart drawn in a book. Their seeming date is clearly clandestine as it is arranged by Banksy giving Brooke a book, “Tonight @ 8pm” written inside. Brooke is attacked on her way to meet Banksy whilst texting her at the rail crossing rather than driving to safety and doesn’t even notice that the crossing barriers have lifted as she’s so engrossed in Banksy’s text.

Student/teacher affairs are nothing new, but with the frequency of lesbian incarnations (especially if we include protégée/mentor relationships, such as 2012’s Passion) one would think it’s really the education system that is the origin of female homosexuality. It’s possible that society finds a female-female student/teacher relationship less threatening or predatory than heterosexual or gay male versions. This could be due to the fact that many people don’t think of lesbian sex as “real” sex. Many (straight) people argue this point; even Kanye West mused, “unless they use a strap-on then they not dyke”, and has been a topic of debate in politics when it comes to gay marriage and consummation/adultery. As such, perhaps the mainstream may see a lesbian student/teacher relationship on their TVs as innocent and harmless. This was definitely the case in the BBC’s True Love series. Whilst the student in question was 16 at the most, her teacher was depicted as a sympathetic character and the relationship pure.

Another possibility is the troubling infantilisation of women in Western culture. Women are often belittled in quite a subtle way in pop culture which removes the majority of predatory, and similarly stereotypically masculine, traits. For this reason a female teacher in a relationship with a student, of any gender, is often portrayed as less serious. I am by no means arguing this for real life, as female teachers continuing relationships with students outside of these fabricated worlds cause as much controversy as male. However it is in this fabricated world where women are often portrayed as less powerful and less of a threat that it somehow seems more acceptable for an adult to be romantically involved with a teenager as it is without the brute force of penile penetration. Whatever, these relationships rarely last anyway, thanks to the fact that often…

As with student/teacher relationships, dramatic and tragic deaths aren’t something that are held exclusively by the gay community but the sheer volume of lesbian (and gay) deaths turn it into a total trope. Outside of Glee there aren’t that many mainstream lesbian characters on television, and generally if a regular character gets a girlfriend she dies fairly dramatically. The lesbian is murdered in all the examples listed, and these are far from the only series’ in which this happens. Dark Angel, Boardwalk Empire, Teen Wolf, and even The L Word have had their primary lesbian assassinated too. TV Tropes calls this trend “Burn Your Gays”, and more specifically, “Dead Lesbian Syndrome”. Traditionally this would be seen as punishment for homosexual perversion, but with a more modern view the lesbian figure is martyred as they are often undeserving of death, such as Tara in Buffy the Vampire Slayer. Nearly all the women in the examples given have been innocent, to the point that their death suggests that the world was not worthy for them. Tara particularly is an example of such a theme as she is persistently “good” throughout the series (to the point that she’s a bit boring) and the traumatic aftermath of her death demonstrates the importance of her goodness acting as a balance or safe space for Willow.

Brooke initially does seem to be an “innocent” too. She is a cheerleader, and teaches it to younger children showing that she is not a stereotypical rebel or high school drop-out type. During her first conversation with Banksy they discuss physics at length, and it is Brooke’s comprehension of Banksy’s book about physics that allows them to organise their affair. It is Brooke’s intelligence that seems to place her on a similar intellectual plain with Banksy, justifying the implied relationship and so placing her into the field of martyrdom as she dies following her heart. So whilst Brooke may not unequivocally be homosexual (five minutes into the show), her implied lesbianism remain a common precursor to being brutally killed.

A heavy reliance on tropes is not necessarily a bad thing. Hemlock Grove’s setup gives the viewer something familiar to set the show firmly in the horror genre. Not only that, but it may give the opportunity for surprise and subversion. Along with those listed we are told that the grubby gypsy is, of course, a werewolf and that, of course, the rich kid has a withholding drunk of a mother gifted with acerbic wit. With these clichés it often runs that they are established to defy. For instance, the rich kid’s open affection for his deformed sister allows for a new addition onto the dysfunctional wealthy family trope. Hopefully this prevalence of the expected will allow the series to use these to its advantage, and expand upon the familiar to create a satisfying and unique story.

Posted on Jun 19, 2013 by
Spencer
Contributing writer for The Artifice.
Follow