How to Keep Friends after Playing Monopoly (Satire) 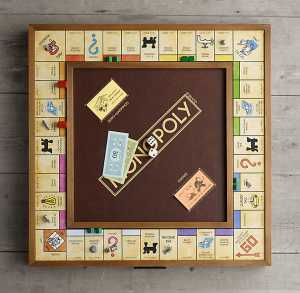 Monopoly is a property game in which the basic objectives are to acquire property, and ultimately, bankrupt opponents. The mechanisms of the game necessarily require a cutthroat, competitive attitude. The history of the game indicates that that is the intent. The game, created at the dawn of the Twentieth Century by Elizabeth Magie Phillips, was designed to be as much a propaganda tool for the anti-trust cause, than as a family game for those that had more leisure time (ie. the emergent middle class of the United States). This point becomes more poignant with the fact that game advantages are formed based on the chance of dice rolls.

In 2012, as a part of a greater behavioural study, the University of California at Berkley, found that a person that has structural advantages in a game of Monopoly (monetary, number of dice rolled per turn, salary, etc.) behaves in a dominant manner (such as ‘smack talk’), and vice versa. Whilst normal game-play does not generally have the lopsided rules described in the study, the general principal (that players that are winning at a game of Monopoly tend to act impetuously, while players that are losing tend to act in a more defeatist manner) still holds. This necessarily would correlate with some degree of resentment on the part of the defeated player. In such circumstances, the best policy would be to moderate both tendencies – that is, be gracious in victory, and accepting in defeat.

But this is not always the reality. If the persons playing Monopoly have no self control, the possibility increases that the winner will bask in his victory as much as Kanye West basks in himself, and that the loser will become hostile to the winner. In the case of the latter, this can be the result of the former, but not necessarily. This is the demographic that will have such issues with Monopoly, and this is the demographic that this article is targeting. As such, if the reader of this article is one with no self-control, the most advisable course of action (if you value your friendships) is to lose intentionally. Ergo, here are five tips to losing a game of Monopoly. 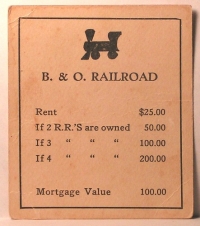 1. No Railroads or Utilities 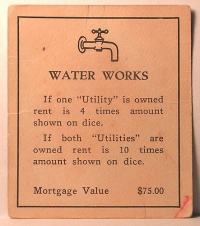 Railroads and utilities are moderately priced properties that have a generally reliable cash flow. In a top ten list of most visited properties, three of the four railroads, and Water Works are on that list. The more that are possessed, the more money, per landing, that is made from them – with no need for development in houses and hotels. Because of this these properties would be part of a winning strategy. But since the goal is to lose, avoid purchasing these properties – trade them in the ‘fortunate’ event of a possession.

The purples carry the downsides of being landed upon rarely (in fact, the least likely), and a low reward when someone does land on these ($450 rent with a hotel on Baltic Avenue; $250, on Mediterranean Avenue). These downsides more than outweigh any advantage of being cheap for purchase and development. As such, a Purple Monopoly is a cornerstone of any losing strategy. But there is more than

To aspire the Dark Blue Monopoly may seem counter-intuitive if the aim is to engineer a deliberate defeat. For it is true that the rewards are very great for any who develops this monopoly to the greatest extent (rent on Boardwalk with a hotel is $2000). But the development of these monopolies are expensive – $200 per house in these monopolies – and is less visited as a property group by all other potential monopolies except for the purples. As such, these properties

are high-risk (particularly when other monopolies are on the board), and are likely to eat quite a bit of money. If you want to lose, these are the properties deserving of focus.

Lastly, with all these properties, develop these to the point of maximum financial drainage. The only exception to this rule is to limit development of the Purple Monopoly to four houses for each property. That way, if assessed for street repairs or if required to make general property repairs after landing on Community Chest or Chance, financial pain will be maximized – under such scenarios, three and four houses cost more than one hotel (you can apply this same principal to the dark blues, but since it is unlikely that you will develop 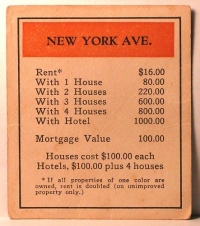 this enough to get to that point, it matters little). 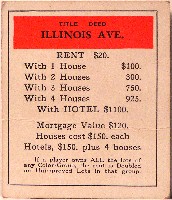 onopoly is relatively inexpensive to purchase and develop, has a strangely high player landing frequency, and, when fully developed, have a taxing enough rent charge to knock a player out of the game – especially when a game has progressed to a point where resources are stretched thin. The Red Monopoly has a comparative landing frequency, and is more damaging when fully developed. The only downside is that, at $150 per house, it does not share the development affordability of the Orange Monopoly.

Having stated this, if either monopoly (much less both) is acquired, the path to victory is made clear. Too clear. Avoid these monopolies for a defeat, and make certain someone else has these monopolies if possible.

4. Create Monopolies for Other Players by Trading

In the path to defeat, there will generally exist instances where the player holds a property vital to a monopoly for another player. Since the goal is to lose, trade these cards to opponents that have such monopolies (especially orange or red) either for Purple and/or Dark Blue Monopolies (if applicable), or non-Railroad, non-Utility non-monopoly properties. Doing this will maximise the opportunity of others to win and maximse the opportunity for the reader to lose – both by cutting off good trades, and by utilizing points 3 and 4. 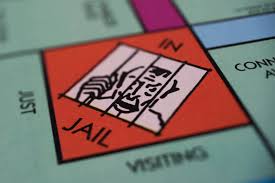 If hauled to jail (in Monopoly, not in real life – hopefully), what to do depends on how much the game has progressed. If jailed early in the game, attempt to roll a double to get out of jail. This will likely make a jail stay be three turns, with the fifty dollar fine, as opposed to just paying the fifty dollars on the first turn in jail (this excludes the minor possibility of rolling doubles, which is outside of player control). This will eat up turns in jail, which would have been used for attempting property purchases, thus giving opponents an advantage in this regard.

If jailed late in the game, get out of jail as quickly as the game allows – pay the fifty dollars at the first turn after being sent to jail, then roll the dice. This will maximise the opportunity to land on the properties of other players, allowing a greater chance to haemorrhage money. 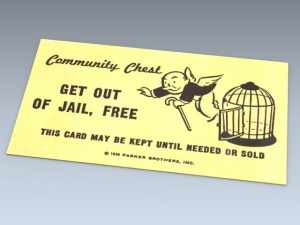 This will likely decrease game play time (especially with Orange or Red Monopolies in play). It is also advisable to dispose of the Get out of Jail Free Card through trading it away, but given the likelihood of such an acquisition, and number of times that it can be used whilst in player possession (once), this is not a major concern if unable to dispose of the card.

Doing these five thing will all but guarantee perpetual defeat. If you have no self-control or your friends are hyper-sensitive, this should impress them, as this will allow them a chance to enjoy victory. Of course, by now you have recognized that either of these things are harmful in life, and has raised questions about your own life beyond Monopoly. As such, the advisable course of action is to gain more self-control and/or change your acquaintances – depending on your life.

Games as Art: Displacement within the Art Gallery
The mod – new gameplay and community
Increased Film and Television Adaptations of Popular Video Games
The Minecraft loophole: a library of banned journalism
Storytelling in Gaming
The Outer Worlds, a centrist’s critique of capitalism.
The ‘Dadification’ of Male narratives in Video Games