The Horrifying Appeal of Junji Ito 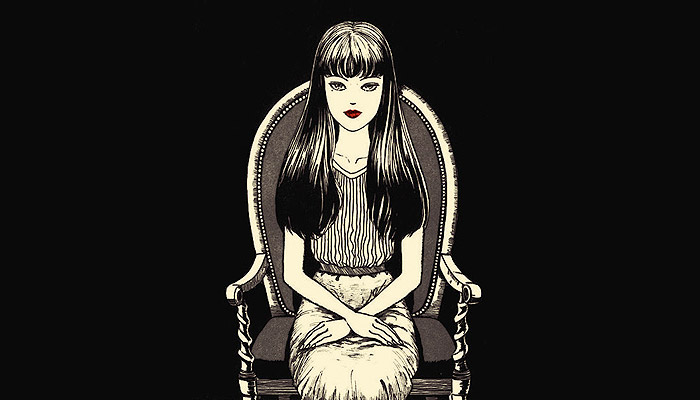 If you’re a fan of horror manga, then there is no doubt that you will have come across the works of Junji Ito, a prolific horror mangaka whose stories will leave you questioning and deeply unsettled.

The world of horror manga is vast, with many excellent titles to choose from. As a genre overall, there are many aspects that make horror appealing; the suspense and tension, the adrenaline that accompanies fear, and the social activity that it engenders. 1 Yet even within the scope of this appeal, Ito’s manga always stands out, edging above the rest in terms of creativity. So what is it that makes his work so unique and appealing? In order to try and answer this question, this article will examine two aspects of Ito’s manga; the visual aesthetic, and the narrative themes.

As a side note, this article will be focusing on Ito’s manga specifically, not the recent anime adaptation Junji Ito Collection (2018). Interestingly, the anime adaptation was criticised for falling short of the original works, partly due to an inability to replicate Ito’s incredibly detailed art style, and partly due to a lack of atmosphere. 2

Even a simple Google search for Junji Ito brings up pages upon pages of gory screenshots from his manga. Wading through the depths of these images, one thing is made immediately clear: Ito has a very distinct style, and it is horrifying.

Being an author of manga, Ito’s artwork is almost entirely black and white, with colour only being used for cover pages. Obviously this is normal for manga, and does not prevent the conveyance of a wide range of moods and aesthetics. 3 Ito is no different, taking this lack of colour and using it to create eerie images, with characters that appear devoid of life. Human characters rendered by Ito tend to have white skin, with realistically detailed features. While one would think that this lends itself to humanistic, lifelike characters, this is not the case for Ito’s work. Of particular note is that, despite the intricate details drawn into their faces, Ito’s characters never have any blushing in their cheeks. This visual choice contrasts with that of most other manga, and gives the characters a pallid, lifeless look. This creates a sense of ‘inhumanity’, which is a common theme in Ito’s manga, and adds to the overall ambience of his stories.

Additionally, character faces tend to have minimal shading, other than for dramatic effect. The plain face provides an excellent contrast for details that are drawn on, and emphasises any unnatural elements that are present. In particular, the eyes tend to be drawn with more detail than the surrounding face. This allows fearful emotions and the insanity of the characters to stand out, even when other elements of the horror are not visible in a particular panel.  4

But not just the eyes – all of the detailing in Ito’s manga is incredibly intricate, which is another prominent feature of his art style. Alongside regular manga screentones (shading patterns), Ito makes heavy use of lines to demonstrate texture. All of the gory elements are shaded with a variety of lines to imply different squishy and drippy textures. It is this use of texture that makes much of Ito’s horror so unsettling – something that would normally be unimaginably disgusting and impossible is rendered in visceral detail, such that it almost can be imagined, felt, and experienced. Ito’s art style also makes use of strong contrast, both in the characters and their environment. The vivid usage of black and white helps create a sense of depth, which further adds to the eerie realism of his work.

Beyond the unique and vivid art style, the aesthetic of Ito’s manga also relies on its content. It might be a little uncomfortable if his art style was used to draw a cutesy, shoujo-style romance, but its downright horrifying when used to draw hideous insect-like creatures, deformed limbs, and twisted environments. There’s a solid blend of humanoid and non-humanoid monsters in Ito’s work, and both are suitably scary.

For human and humanoid characters, there’s a strong element of body horror, which refers to a sub-genre of horror involving the deforming and warping of the human body. 5 Most of Ito’s manga features this heavily; Uzumaki (1998-99) is a good example, with various chapters depicting limbs twisted beyond reason, characters slowly morphing into snails, and spirals drilled into characters’ faces. The Enigma of Amigara Fault (2002) is another popular work by Ito; the deformed, once-human character shown below provides a good example of the type of body horror common in Ito’s work.

Body horror is nothing new, though, so why are Ito’s drawings so intriguing? Well for one, they’re unique. Classic western body horror often showcases humans transforming into monsters or zombies, or growing strange limbs. 6 Ito’s work contains that and much more; often, the body is recognisably human, but warped into something grotesque. Ito once worked as a dental technician, and makes full use of his prior expertise to create plausible images. 7 This element of being recognisable as human is important, as it makes the image much more feasible – and something that seems possible, no matter how irrational, is much more scary.

The non-humanoid monsters are less common, but still scary. One of Ito’s most popular titles, Gyo (2001-02), perfectly showcases his unique designs. Gyo features sea-dwelling creatures emerging from the depths of the ocean to invade land, propelled by insect-like legs. Such a design combines two common fears; insects and the deep sea. While humanoid horror is definitely the focus of Ito’s work, his unique and clever monster designs ensure that his non-humanoid horror leaves plenty of impact too.

It is these intricately detailed visions of grotesque characters and scenarios that makes Ito’s work so visually unique. The images, while uncomfortable, are unlike anything else in horror, and that alone makes it difficult to look away.

Like all classic horror, there’s an underlying trend of monsters and the unnatural. The designs of these aspects have already been discussed, but it’s worth mentioning their conceptual appeal as well. For example, the fish monsters from Gyo are scary for two reasons. Firstly, their design is clever, tapping into two types of fear, as discussed above. Secondly, the creatures inspire a more practical type of fear; taking creatures that are usually removed from daily life (by virtue of being in the ocean), and giving them the means to intrude into what would normally be considered safe from them. This concept is expanded upon in Ito’s work, in which there are often no safe spaces, and characters are doomed to confront the horrors with little reprieve.

This ties in with a common theme of Ito’s manga, the idea of ‘beyond human’, which is explored in a variety of ways. For example, the human characters have a tendency to lose themselves to madness, whether due to a supernatural force or their own paranoia. In this sense, they shift beyond human rationality into something darker, and no longer human. Indeed, many of his stories begin with ordinary protagonists, but most eventually succumb to insanity and the pull of the supernatural. In doing this, the seemingly ordinary characters become part of the horror themselves; this is evident in works such as The Enigma of Amigara Fault. The concept of losing oneself, and consequently losing agency is a scary one, 8 and this links to further elements common in Ito’s stories.

Often in Ito’s stories, the driving forces behind the horrors that are occurring are non-human. Of course, this is normal for horror, however Ito tends to favour godlike forces, moving beyond the norm of spirits and zombies. Importantly, these deific entities are unstoppable. Unlike traditional horror, there’s no way to put the ghost to rest, or exorcise the demon. The entities are beyond human comprehension and therefore beyond human intervention. This means that there is a recurring sense of inevitable demise throughout Ito’s work, which again strengthens the sense of losing agency. These sinister forces feature prominently in works such as Uzumaki and Muma no Kikou (2018). Reading such stories, one can’t help but feel fear when empathising with the characters, who have no hope of escaping their gruesome fate, no matter how much they panic or struggle.

While deities might be the drivers behind Ito’s horror, the majority of the monsters themselves tend to take on a humanoid form. Again, the design elements of this choice have already been discussed, but there is also something conceptually unsettling about humanoid monsters. Like the designs, the more humanoid monsters are easier to imagine appearing in real life; and therefore more likely to prey upon one’s mind, long after the story is over. Characters such as Tomie from the popular Tomie (1987-2000) initially appear almost totally human. This reinforces a sense of tension that spills over into daily life; such a being might just exist, and never be found out, perhaps even amongst your own circle of friends.

These multiple explorations of the concept of humanity are a significant part of Ito’s manga, and part of what makes them so unique. Ito himself has stated in an interview;

“…for me it is the human who has the potential to make the most fear. Either physically, whether by his actions, or his psychic, there are plenty of parts of the human that can be scary. And my goal is to use the human to try to scare readers as much as possible.” 9

In addition to this theme, Ito’s work is easy to describe as bizarre. While many of his stories are thematically profound, they are also narratively eccentric, nonsensical, and irrational. Interestingly, this actually counteracts some of the other points made in this article: primarily, it pulls the stories back away from ‘uncannily human’, making it easier to distance oneself from them. However, these narratives are always creative, and importantly, incredibly unique. The intrigue of a story that’s never been told before does enough to pull the reader into Ito’s narrative, and this, combined with the other horror-esque elements of his manga enable enough suspension of disbelief to make them scary.

So to answer the question of why Junji Ito’s manga is so unique and appealing; it all comes down to aesthetic and narrative.

Ito’s work makes use of a vividly detailed art style to depict cleverly designed monsters, and twisted humanoid body horror. These characters and creatures are then set against creatively bizarre narratives. Behind the stories are a backdrop of poignant themes; the nature of humanity, and a sense of inevitable doom brought about by relentless deities. It is these elements that combine to ensure that Ito’s stories are sufficiently horrifying, leaving a lasting impression that always has you coming back for more.