Tim Burton’s works always know how to fascinate and surprise their audience: their degree of unpredictability and creativity is mirrored in their stories, settings, characters and colours. In this regard, Big Eyes is no exception. It appeals from the start with Andy Warhol’s quotation:

“I think that what Keane has done is just terrific. It has to be good. If it were bad, so many people wouldn’t like it”.

Warhol’s opening quote is, somehow, a premise to the movie, because it helps to set from the beginning Burton’s personal aim for his work: to question the categories of good and bad in the arts according to what people like(d) or dislike(d). To judge a work of art only by measuring its appreciation among people is not enough to determine its actual worth, yet the movie tries to make a point about the fact that this is how it worked and it still mostly works nowadays in the arts.

It is not hard to understand Burton’s interest in the Keanes’ story if we think of him as an eclectic artist, talented in drawings other than successful in the film industry. As a child, he implicitly assimilated the suburban art that was deeply embedded in the cultural environment of his early years. In the mid-nineties he learned the true story of the Keanes through a friend and became interested in exploring those paintings that never really left the space of his imagination; the ones that, as he said, you could find everywhere – at the dentist, at grandma’s house, at the supermarket – and seemed to keep a constant eye on him. Evidently, those sinister, kitschy and sad big-eyed child paintings must have worked somehow powerfully in people’s minds if everyone possessed one, but no one could really explain why. For Burton, who grew up surrounded by them, they remained “stuck in my head like a weird dream” – enough for him to turn the story into a movie.

From Where it all Began: the Keanes

It’s 1958 in Northern California. Margaret leaves her husband and moves with her daughter to San Francisco. The impact with this new world of freedom is immensely liberating to her; she can finally spend her life painting, supporting herself through what she loves the most. It is at a street paintings exhibition that she meets Walter, and he is still a stranger to her when she soon after accepts his marriage proposal, naively embracing a life still unknown to her under the relief that he will take care of herself and her daughter. But the inconsistencies that surround Walter’s life show up from the very first encounter, even if she is just too ingenuous to see them. He presented himself as a painter, but she never really saw him once painting something. As he would later tell her, he actually was an estate agent, but liked to think of himself as a ‘painter of the weekend’. He fascinated her with the romanticized story of the time he spent in Paris, where he claimed the inspiration for his only subject in paintings – monotonous Parisian scenarios – came from, but never really went there.

On the other hand, he also encouraged her art and was able to have her paintings exposed on the walls of a famous restaurant – that’s when their success began. They were living the perfect life, but when she discovered that Walter lied about the paintings, telling everyone he made them with his own fair hand, something inside her changed. She started to blame him, but he managed to keep control over her feelings, and therefore over her paintings, his most precious source of income. Walter took possession of her talent and success, and she compliantly ceded to his authority. The moment marking the negative turning point was when Margaret lied to her daughter about the paintings’ authorship. From then on, she simultaneously became a victim and the accomplice to a big lie.

After another big fight with Walter, she finally decided to leave to Hawaii, where she started a new life, joined the Jehovah’s witnesses and for the first time found the strength to tell the truth about her paintings at a local radio. Margaret and Walter eventually had to face one another at the courtroom. When they were both asked to paint the famous big-eyes children, Walter simulated a muscular arm sprain to avoid painting, and Margaret won the case and was finally acknowledged the merit of all her works. She is 88 now and still paints everyday. 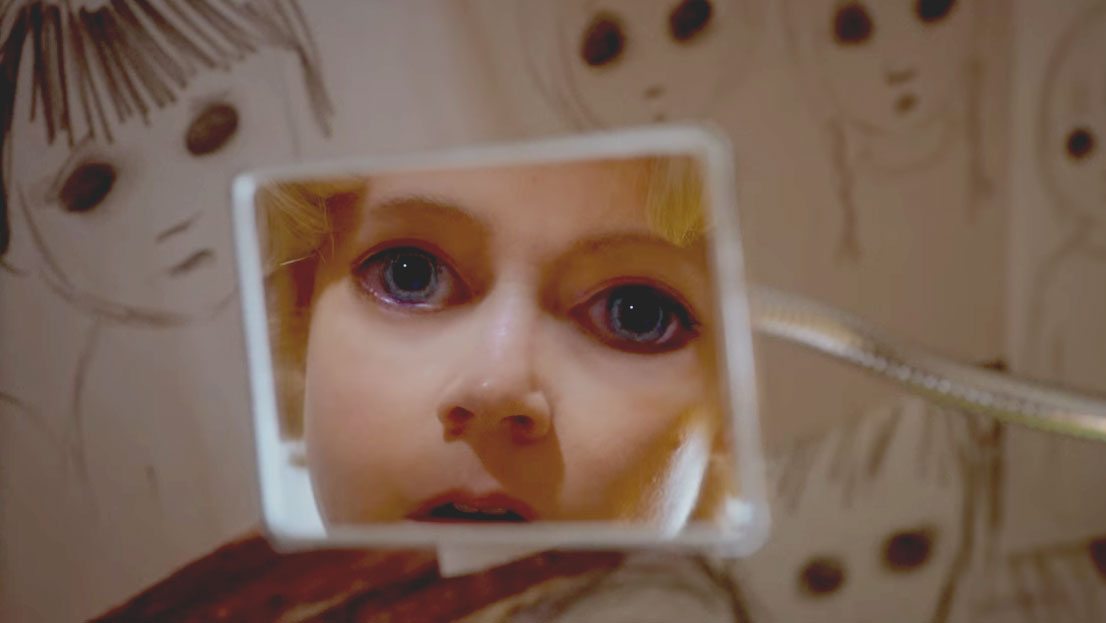 That of Margaret is a true story, but it doesn’t belong just to her. In many respects Margaret stood for other women like her, with big dreams but also big difficulties to overcome. She had the talent and the will to express herself through her paintings, but had to face the patriarchal system of 1950’s America that Walter embodied, where “nobody wants to buy lady art,” as he told her.

To Burton, the Keane couple is symbolic of the American dream, though also standing as a weird and unconventional representation of it. In fact, both of them are complex figures – multifaceted, eccentric and not easy to label. Margaret cannot only fit in the category of the mother, the housewife or the artist – she is all of them, all at the same time. But it is in her character that her personality reveals all its nuances: on the one hand, she is ingenuous and fragile. She let her husband exploit and turn her art to mere commercialisation; she lived a life exiled in her painting room, allowing to be distanced from her daughter, the only one who reminded her that she was an artist, and therefore she should take her art back. She permitted all this to the point that it would have been easy to convince her that she was not the creator of her works and, if asked, she couldn’t answer that she painted them. Burton found in this emotional condition of hers the perfect way to convey her feelings on the screen, showing his hallmark while engaging with grotesque effects: in the scene at the supermarket she is in a state of hallucination and sees people with big eyes, as if her paintings came to life in an imaginary world that took the place of reality. Amy Adams plays wonderfully this part, working on that deeper level of reciting made of silences and gazes more than else.

Looking at Margaret, we cannot really say that she was just a victim. There is an inner, deeper side of her who made her less of it because of her complicity with Walter, and overall this hidden side displayed a quiet strength in more than one occasion. In her, weakness and courage, self-annulment and tenaciousness coexist. When she needed to feel that she was still the master of her art – something she couldn’t say of her big-eyes paintings anymore – she started to paint elongated, Modigliani-like bodies and thin figures, and the big eyes disappeared. She made an audacious step to start anew, by redefining the boundaries of her style and unveil other sides of her art rather than give up on it. On the other hand, she found it hard to tell the truth about the paintings, to the point that only religious laws seemed to be a good reason to confess it during a radio interview, being honesty a prerogative to enter into the Jehovah’s witnesses.

Walter, being her opposite, made the perfect counterpart for their couple, and at a first glance he doesn’t seem to be more than a cunning businessman which much sense of the money he could make with something to sell and someone to persuade to buy it – and that’s probably exactly most of what he was. But Walter’s complexity lies in the fact that he has also a positive side to be looked into, and Burton has the merit to have unveiled it with a simplicity that speaks for itself. Walter was a man with a great love for art and big broken dream of becoming a worldwide famous painter, something that not even the gift of the gab, without that of talent, was enough to buy. Under all the paintings he never really painted lied the constant frustration of failure, which grew bigger and bigger as his banal and much exploited glimpses of Parisian milieux confronted the increasingly popular paintings of her wife’s big-eyed children. Walter knew that his strong will would always clash with his actual abilities to become the painter he wanted to be, and that is why he achieved from Margaret’s art what he could never have by himself.

Burton’s approach to this side of Walter is shown subtly: the director hints at it with delicacy, as if to express his will to stay away from only negative judgments on Walter and unveil, instead, his passions. By doing so Burton adds a new taste of reality to a story that is real despite a truth that, as he said, is stranger than fiction. Margaret and Walter in fact are real but slightly unbelievable people who seem to have just come out of one of his fantasy movies. And they are no ‘black or white’ characters – she is not completely the victim as he is not completely the villain of the story.

“The Windows of the Soul” 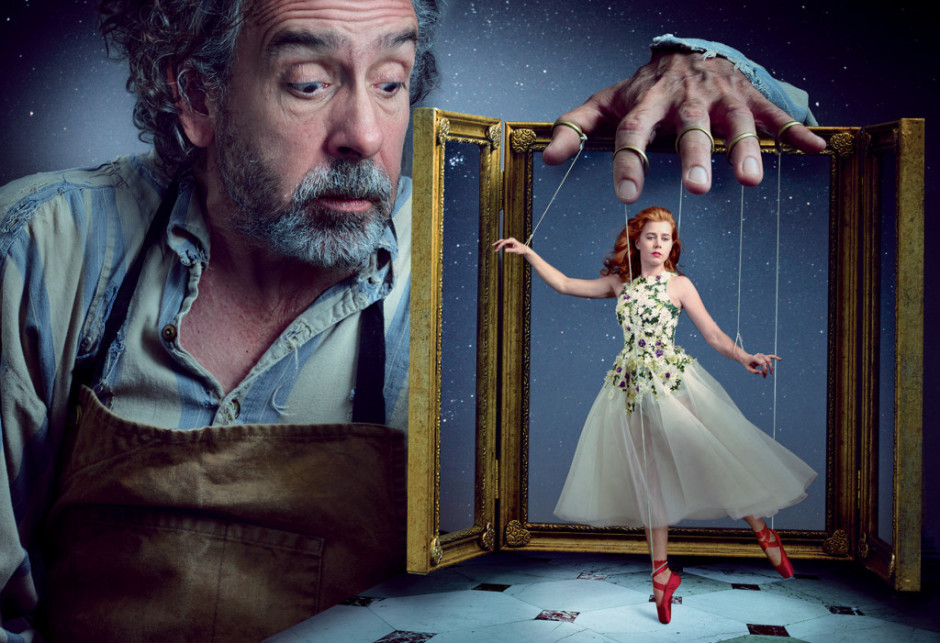 Big Eyes is the kind of movie where biography meets autobiography. It not only tells of a woman artist’s difficult journey towards her own freedom and emancipation, it also tells something about Burton himself, who grew up with magnetic, big gazing eyes on the walls, and always wanted to know why they ended up there and why someone would paint them.

Among Burton’s wide filmography, Big Eyes is Ed Wood’s heir, inheriting both its biographical theme and the brilliant minds of screenwriters Scott Alexander and Larry Karaszewski. The movie possesses the trait of the exceptional and of the unconventional – common trademarks of Burton’s works – but for some reasons it exceeds, and deviates from, them. This time Tim Burton restricts the limit of his flourishing expressiveness, confining it mostly to the figure of Walter, whom Christoph Waltz renders the perfect portrait. But for the rest, the movie is shaped under Margaret’s quietness and mysteriousness, and that’s why it comes with questions that are left pending and won’t find an answer as the movie ends. Why did Margaret paint those big eyes? We are given a too unconvincing and summary answer: “eyes are the windows of the soul,” she says, but the impression we are left with is that it is not all that lies behind the depth of her character. Nevertheless, it seems like we have to deal with unsolved questions, because Margaret is a living enigma and this Burton understood and tried to convey through a movie that takes her stature and gently flows in the background, showing her inner turmoil without trying to supply explanations for it. Big Eyes is extraordinary exactly because it stays a step aside, keeping the right distance from the things we cannot define, and it seems to suggest that we do the same.